Anyone has any experience with this printer?
this is the problem… i used to have it nice configured (spend one whole month doing it, becuase its a serial printer that is plugged into usb and the driver emulates the serial thru the usb port). The problem is that the printer is ESC compatible, it set to be ESC but prints like a generic text printer.

I know that it can be configured to receive and process ESC commands, since I managed to do so… but my computer was stolen, with all the configuration, and I cannot remember what in hell I did.

any help would be gladly rewarded with a nice large pizzzzzzza!!!1

I have that printer, I could configure that printer as ESC printer (with some bematech software) instead of Bematech standard but had no luck to use it correctly with SambaPOS. So if you remember how you did, please share

In the meantime, printer is set as “bematech standard”, driver is generic windows driver, and using default printer template works (bmp, center, align, font size, …) The only thing I cannot figure out is how to change this horrible (and really big) default font.

I remember that I added a Generic/Text printer driver from windows dialog, then in the printer commands I entered a ESC command, but dont remember wich… I thnk it was the compressed font comand…

This time I am adding a generic text printer but it does NOT work… realy I dont remember what I am missing here, when I installed the first time I was sitting in the computer with this printer for something like 8 days in a row… until I got it working…

REMOVE all bematech drivers, then restart your computer… after that
install Bematech virtual serial driver 2.08 from here
http://partners.bematech.com.br/suporte-recursos/downloads/?did=162

once its installed go to 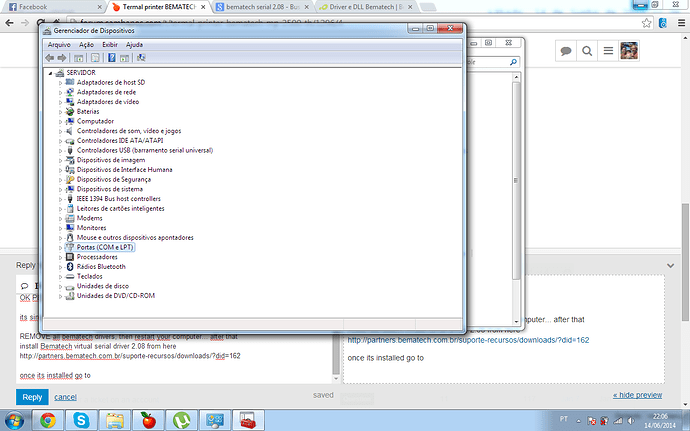 After that add a Windows Genertic/Text printer and use it in the recently added com port.