So whether this is a *request *or not- you can decide @emre but I would like to know what can be done at the Show Message Action? 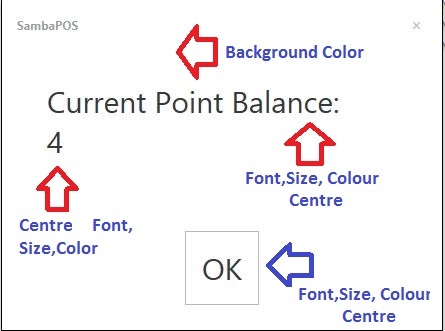 At the moment I have worked out \r for Wrap. Can I please have a guide to what can be used in the Message Line:
Current Point Balance:\r{ENTITY DATA:Customer:Points}

Happy to only be advised of all the commands that can be used so I can work within that restriction.
This will again serve as a better “collective” in this post as what can be done. thanks in Advance.
(Sunday: my lawns & Christmas lights are calling

You cant format the show message action, youre better using the ask question action. I use this loads, much more formatting options, font, size, background colour, full screen colour instead of just the ‘banner’ across the middle of the screen

At the moment I have worked out \r for Wrap. Can I please have a guide to what can be used

Fairly certain that is all that Show Message supports. As @RickH mentions, if you need more options, you have Ask Question action.

I cannot think of any real justification for having more formatting support for the Message when we have Question. Though “nice to have” for Message, I would be curious to know if you have any real usage case where Question would not work in place of Message?

The only thing I can think of is that Question is not “movable” whereas Message can be drug to the side, but even so, both are “modal” (ie. they block operation). For example, for the screenshot below, I wanted to use Message because of it’s movability, but Question had to suffice in a very transparent configuration because I wanted to see the screen behind it… 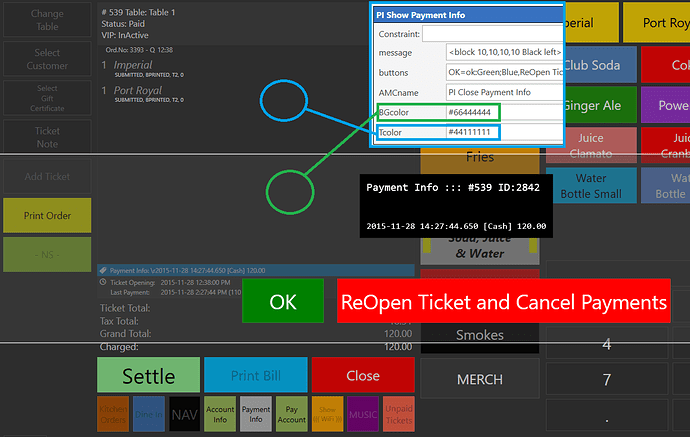 Can I please have a guide to what can be used in the Message Line:

Ill be honest its much better for you to just try things. I mean formatting options are universal they will either work in some places or they wont but syntax is the same. So trial and error is your best friend here. Waiting for guides will limit your learning.

In fact we find things even Emre didnt realize were possible by simply trying them.

Hey @QMcKay - since I stumbled across the Cache issue I thought I could deal with keeping the Customer informed of their points, balances, (other wallets to come) with Popups - show message. So by using show message I can place Automation Commands on Ticket Screen, Payment screen etc which which when used will “Show Message” of current balances.

Yes, again thought you may say that @kendask. To tell you the truth I am a little “gun shy” as recently I burn many hours testing something, thinking “what the heck?” (and seriously doubting my skill set) but later found out it was broken. Time and speed to market is everything at the moment and I cannot afford to loose time as this is my job. I cannot walk away and do me other job and come back to see if I solution eventuates.

Maybe I have misconstrued where we wish to take SambaPOS V5?

The process I am using is:

Typically I would use the documentation set provided with commercial software like “religion”. I read, study and implement very fast. Unfortunately the document set here is limited, and its the input from the forum which is paramount.

Trust me I am very uneasy about asking for help and only use an AT-mentions if I am getting frustrated and feel I have exhausted all options. I also use them to link in a user with a possible design idea.

So getting a quick reply from vastly more experience users like yourself is one of the most valuable aspects of SambaPOS in its current genesis. By some like Rick coming back and saying, categorically not it does not support “that” I move on. By emre saying no, it only supports “\r” I can immediately ask for the next best option and move on.

Sorry for the long post kendash as I hope you know I really appreciate and value your contributions. I just wanted to give you my perspective and I believe as I said in others posts it will only benefit the greater audience looking at SambaPOS.
Respectively Paul.

What I am trying to show you and the greater audience is if you learn the underlying concepts you will notice a pattern. Those concepts are well documented. We won’t have a manual showing all possible situations because well it may never end.

Once you understand the underlying concepts and you see how it all fits together you will be able to move past looking for documentation and you can start really creating custom configurations.

underlying concepts you will notice a pattern

Yes I do see the patterns forming.

It was for all the reasons you just mentioned above is why I spent so long on the Button Captions Syntax - that even you discovered some possibilities. From spending 3 days playing, asking, doing I managed to achieve; a good understanding of Report Template Syntax & Printer Template; and create my first Customer Reports! These I consider highly valuable.

But “horses for courses” as we say over here - I just though the show message question was a little different - either does or does not. I am flying across the other side of Australia tomorrow to start training 4 teams members in SambaPOS so every second now counts… Anyway thanks for your continued support kendash I am sure the distance has a lot more to travel

Actually that’s all I wanted to do haha - what go me asking questions is I wanted the 4 reward points centered underneath the “Customer Points Balance:”. See how I got here

I am sure in the next few days I going to investigate how to use {ENTITY DATA:Customer:Points} in a Automation Command Button Caption. It will save even using Show Message, then Show Message will be relegated to only being used for Debugging.

Actually that’s all I wanted to do haha

No you also want alignment, font, color for message itself and for the button. Probably you’ll also want different buttons as you improve your setup. That is what ask question action does.

as recently I burn many hours testing something, thinking “what the heck?” (and seriously doubting my skill set) but later found out it was broken.

Don’t take it like burning hours. You implemented something that infers with button caches so I (or someone else) won’t burn hours. I also burn hours unnecessarily for lots of stuff. We call it as “helping each other”.

since I stumbled across the Cache issue

Cache is not a issue. It stores data locally so we won’t read button data from database every time we need to render buttons. But… there are cases where we don’t want cache and read it every time from database. You found one of them.

Yes “burning hours” is a bit harsh considering my steep learning curve - could of used better language there!

It is just incredibly frustrating for me being a Developer like you not being able to Master a product. My only point about the cache is it was making me “second guess” or doubt myself. In those cases I think it better to “ask the question” - do you think? Again another reason why this post started.

Cache will not be an issue for next build… However I really don’t like using buttons to present customer data. Every time you display customer selection screen you always looking for a single customer. This customer’s account balance or reward points is useful. So if we have 10 active customers on this screen we have to unnecessarily fetch remaining 9 customer’s info. This creates inefficiency.

I understand this is a great selling argument. Seeing other 9 customer’s account balance is not useful but such features impresses people. That gives a sense of full control. However what working great is more important than what sells great. There are zillions of crap POS that works great on demonstration but fails bad on production. You’re frequenting forum for a long time. You know we don’t deal with such “production time” issues a lot. The main reason of it is we only implement what customer “really needs”. So trying to implement a single silver bullet that solves every thing is a wrong approach. We need to display everything, everywhere to implement a silver bullet solution. Instead customer should see it at the time he needs it. So workflow should be tailored specifically for the customer.

I can see we communicate better with restaurant owners than tech people. Restaurant people knows what they need and they just ask for it. Tech people obviously wants a single solution that fits to all customers. This is the main reason of our long discussions.

In those cases I think it better to “ask the question” - do you think?

Agree, emre - my task is to get 100+ venues thinking all the same.
YES! just saw you add “needs” - I am an Systems Analyst by trade - so looking to use SambaPOS to create better efficiency and bigger profits for our sites. There are plenty of POS systems around but I am looking for the one I can create new methods to produce far better and profitable outcomes!

SambaPOS hopefully will be the answer

[ps: live version will not use Button Captions for Customers! - really used it to see what can be done with syntax and optional display data).

live version will not use Button Captions for Customers!

my task is to get 100+ venues thinking all the same.

I also have a lot of venues but I can never say they all thinking the same. Someone may want to see account balance popup as soon as he enters payment screen and see points popup after adding first food order.

At the moment that screen is unfiltered as I was experimenting. If I was to use such a screen it would be for a particular purpose say balances over credit limit; Customers names contain “Fred”; Customers with unpaid tickets etc.

Ok we are slightly different here - even though our customers are owned separately they all operate by the same code and require the same things. If they require something different then (in time and when I am better qualified) SambaPOS will do it. But for now commercially we will pay for the license ourselves and supply it free to each site. There is a much stakes at play and that’s why we are not the norm like JTRTech.