Thoughts on solving a problem

I was going to post in General, but it seems to be not accepting new posts.

I have setup 4 separate tills with separate accounts that are moved to main accounts when shift is closed (automation command fired via navigation button).

I’m trying to think of the best way to handle a late shift (sometimes until 4am) that is not properly closed out when the day starts new later in the morning (hey, it happens, we all want to go home).

Initially I thought about tying something to ending work period that moves all remaining shift account balances into the main ones. But, I really like the idea of virtual work periods and not having to rely on staff to end work period.

Then I was thinking have something stored in the DB relating to shifts being open or not and somehow come up with a constraint based on date and/or time that would prompt to close all accounts if there is a balance remaining.

Or, perhaps, tie printing of the end of shift report with closing the shift. But this doesn’t leave any leeway for correcting any errors that may have occurred during one’s shift.

Another option I was pondering was a scheduled task in the DB that would run at 0558 before the new virtual work period begins at 0600 and move any remaining balances by creating account documents as needed.

I wanted to pick one’s brain and see if anyone had any thoughts or ideas on the matter. Thanx!

Yup, as you describe. At the end of each shift one counts the drawer, close the shift zeroing out shift accounts and enters a starting bank.

I can’t always be there at the beginning and end of the day. I’m trying to idiot proof it so if someone doesn’t zero out the till at night, it’s automatically done in the AM.

As I’ve been thinking, I’m leaning towards a full clear with work period end and designate one shift to close/open a work period.

Here is a little screen shots of my setup. When a user presses the Print Report on the cash out screen (for that till). The report will print the info for just that till, then… 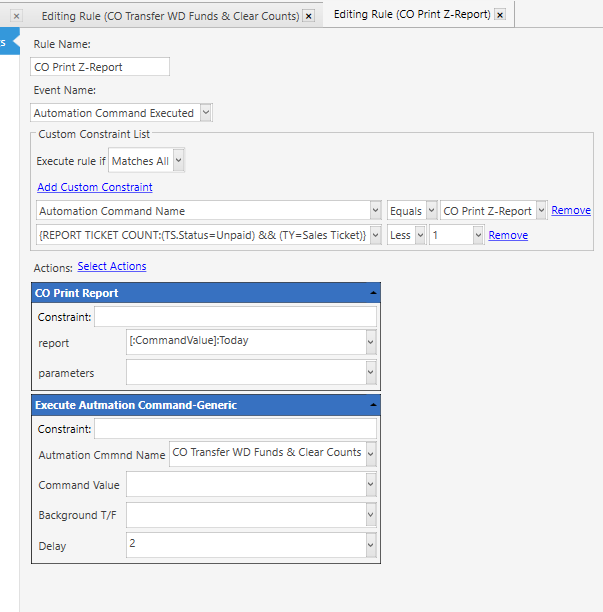 Fire another automation command to transfer that days workday funds for just that till. 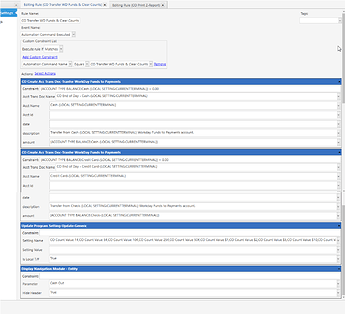 Drawing 11138×1036 49.8 KB
The reason there are 2 different rules is because when they were in the same rule, the funds transferred faster than the report would print. It ended up with zero balance on the report. The 2 second delay is just to make sure the report finishes before firing the next automation command.

The last 2 actions is just to clear the cash out screen fields and display the screen again to show $0.00 amounts.

I use {LOCAL SETTING:CURRENTTERMINAL} to reuse the rule for any till.

If in the future I need to add another till I just need to make an Account, Transaction Type & Document Type. The Rule will handle the rest. Of course the till will need to have it’s own unique name.

If, for some reason, a till did not get cashed out at night, the numbers transfer to the next day and the till will have 2 days of transactions and money takings to cash out the following day.

I hope this make sense.

As it stands here’s where I’m at: 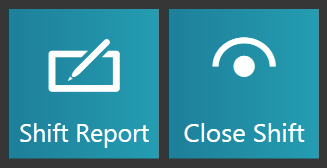 Closing shift automation moves all accounts to aggregate accounts. However, I made rules and actions for each till. Perhaps I’ll go back and merge them - seems simpler.

And duplicate accounts even for the kitchen sink!

I do like your way of printing the shift report with zeroing accounts. I’ll play around with that and see how it works.

Thanks for your feedback!