You have a point there… I thought that the reason everyone switch to entities was because they couldn’t keep track of a user without using entities.

Actually I switched because entities are better in fact Emre even discussed switching users over to entities. Entities are more flexible and offer so much better control. I have to say I would support Users being switched to Entities. It would simplify Time Clocks and you could allow Entities to Log in the system if you wanted. But right now its not that way.

You can link users to entities fairly easily. With Configuration Tasks you could automate the management of Employee Entities this is exactly what I have done with my latest Time clock. I never actually mess with Entities anymore I just use my Config Task it will add or remove the Employees and even create or remove their reports automatically with one operation.

Yea the main thing about the time clock that doesnt work for us is that you have to put in a pin every time you try to open the pos section to create tickets which means you need to setup a defualt user and keep them logged in the whole time… How would you link the entity to the user or just track the users time between clocking in and clocking out and be able to edit that if needed. Not sure… Really ive been looking into just doing a software called TimeClock MTS. Its only 80 dollars for the standalone version and its got a kiosk mode and touch screen compatible… ,Might just set it up on a cheap windows tablet and call it a day.

The time clock I posted is a highly customized one specific for my own needs. You could customize it to do just about anything you want, however @QMcKay has a very basic time clock you might want to look at his tutorial. Mine adds some very advanced customization and most people may not want it. It alters the entire flow of your POS.

I shared mine to show whats possible mostly but I didnt expect a lot of people to want that flow honestly. Mine is designed for strict Employee Accountability.

Which one is it?.. you have a few on here hahah.

There are only two tutorials in v5 tutorials category. His and Mine. Here is a link to his:

Here is a link to his punch editor tutorial as a supplement to his basic clock.

Sometimes it is necessary to edit Timeclock Punch Data when we need to change Punch In (Clock In) or Punch Out (Clock Out) dates and/or times. This Tutorial demonstrates a setup for a Punch Editor for that purpose. [image] [image] ##Quick Links States Entity Screen Scripts Reports Custom Entity Screen Widgets Automation Commands Actions Rules

PS: Me and Q are the only two that has built a time clock or put any effort into it. So it should be easy to find them

Our basic system works almost identical. It works very well and honestly I see no need to invest in third party software unless you want full complex payroll.

You could even make an Entity Screen and use Badges to swipe to clock in and out with. It would be the most basic form of time clock.

Hey, I followd the instructions and whenever I go and add an Employee to the config task it jsut says Task Cancelled

It’s possible it’s conflicting with something in your setup. I’ll test it with latest version to make sure something didn’t break it.

@the133448 I just tested the config task on a fresh database with latest version and it works just fine. So we would need to know more about your setup to understand whats causing your issue.

Ok I just made a fresh database, this is what happens.

What version of SambaPOS are you using?

Also can you show your settings where you entered the GIST url.

Is it giving any kind of error?

I have tried to reproduce that behavior and it works just fine for me every time.

Latest realse, Havent changed any settings of the fresh database, should I?

Hmm I can’t figure out what’s going on with your system. I can’t reproduce that.

@Jesse, Finally got around to implementing this, thanks a lot for your work and the easy configuration task. Kudos.

Quick question,what’s the difference between “view original” and “view actual” punches. I assumed they were something to do if the admin edits a punch.
Can you take a quick look at the gif below and let me know if this is normal? The time and operator ID seems to change when i click view actual (or original) punch.

Original and Actual will be the same until one is edited. If you edit a punch then View original lets you view the original punch before editing. View actual shows the edited current punch. This is useful if you allow a manager to manage your payroll and you want to track any manipulation. Or if an employee requires an edit and they question your edit…you will have documented proof.

If its showing a different time and you had not edited the time then it could be something to do with a delay in processing an action in the rule, I have not experienced that however it should update at same time.

PS: I am working on a time clock that uses Tasks it might actually be more efficient when I am done with it.

Ahhh thanks, always good to know even if I don’t use it at the moment. Makes sense.

You probably should edit the configuration to your needs it was specific to a flow I use but it should give you a great knowledge of some advanced setup features if you study it.

Also studying the config task might give you some great insight into how they work. They are very powerful underutilized tool.

Yep doing that at the moment. Didn’t even realise I could edit the punch editor screen! Here’s my new customization since I don’t edit the time clock.

One more question, anyway to edit the report template? It seems to generate one for each entity staff. Wanted to try and remove the “T” and add a space in the START and END columns. 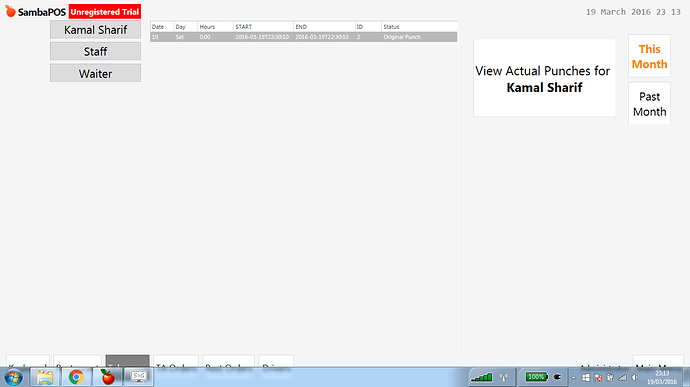 You want to edit it in the config task right? So you can still add employees dynamically correct?