This tutorial will be based on the understanding that you already have TimeTrex Community Edition installed and it is operating correctly it will not explain how to install and operate TimeTrex Community Edition. You should have a working knowledge of how to administer TimeTrex BEFORE you deploy it or this tutorial in your business.
If you have any questions on Installation or Administration of TimeTrex use the official TimeTrex resources http://forums.timetrex.com/ You will not get answers about TimeTrex in the SambaPOS forums

Furthermore you must understand that to see the Entity Screen correctly you should wait until they release the HTML5 version of TimeTrex Community Edition which is due out very soon.

TimeTrex Community Edition is an open source Time Clock and complete Payroll system you can find it at http://sourceforge.net/projects/timetrex/files/TimeTrex%20Community%20Edition/

Purpose of this Tutorial:

Until native support for a built in Time Clock or Payroll system is developed within Samba this Tutorial will show how to integrate various functions of TimeTrex Community Edition into SambaPOS V4 for purpose of automating employee punches and adding other optional functionality. This will serve as a way to include Time Clock and Payroll functions into Samba and making it function as if it was built in without requiring the employee’s to navigate to outside software or opening a separate browser.

Employee logs in to Samba at start of their shift: Samba displays a popup for them to Clock In Employee presses clock in which records a time punch in TimeTrex for that employee.

Employee Navigates to Time Clock Entity Screen to Clock Out: Pressing Clock Out will record a time punch in TimeTrex and log the user out of SambaPOS.

When HTML5 version is released I will demonstrate how to design buttons like Check Schedule and it will bring up the employees schedule within TImeTrex and display it on the HTML viewer widget.

Database Tools Module Import File: This is just the SambaPOS setup portion you still need to setup the TimeTrex scripts as listed below.

You will need to update the file locations, user names, role names within a few of the rules to match your setup.

TimeTrex Scripts: You will need to edit these as according to the tutorial below.

Screenshots of the integration and how it functions: 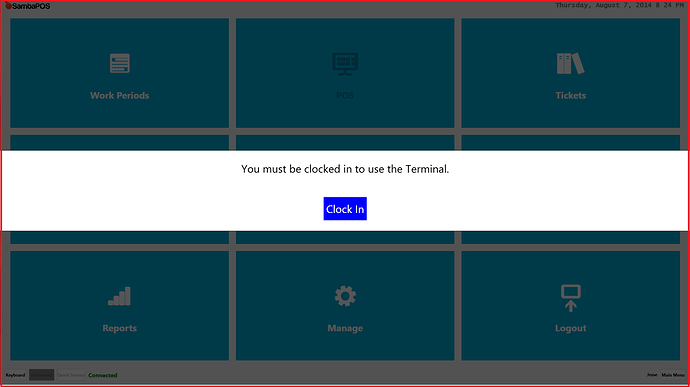 TimeSheet View: This is a Demo to show possible function not an actual Timesheet 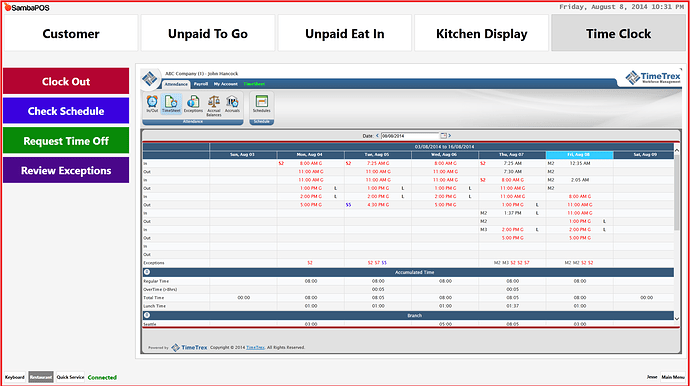 Check Schedule Button is Pressed: This is a Demo to show possible function not an actual Schedule 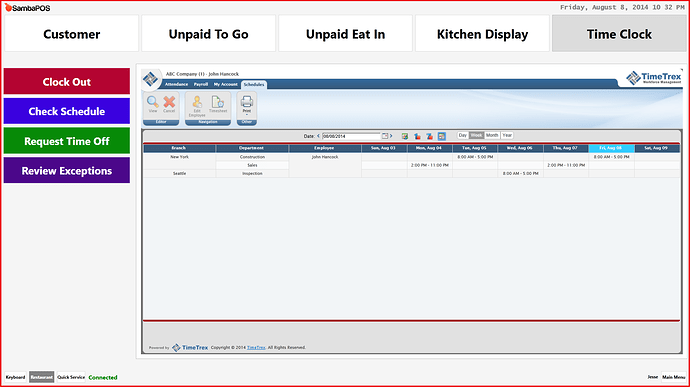 Check Exceptions View: Admin Only Access This is a demo to show possible function not an actual Exceptions Screen 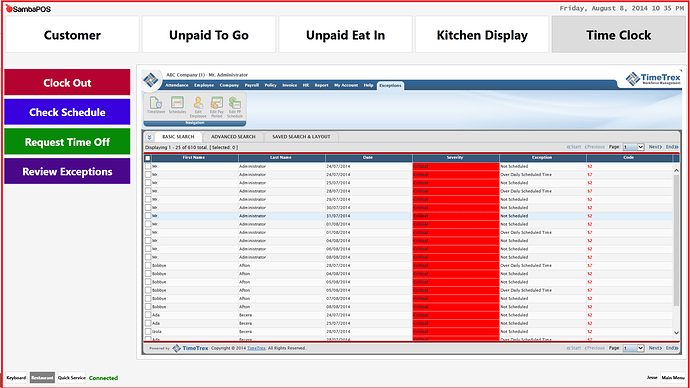 Create a .php file for each employee named the same as their SambaPOS login and save them in the php folder you just made. Can use notepad and just save file as .php instead of .txt

Passwords do not have to be the same for SambaPOS and TimeTrex just Usernames.

Within each employee PHP file that you just made put the following code: 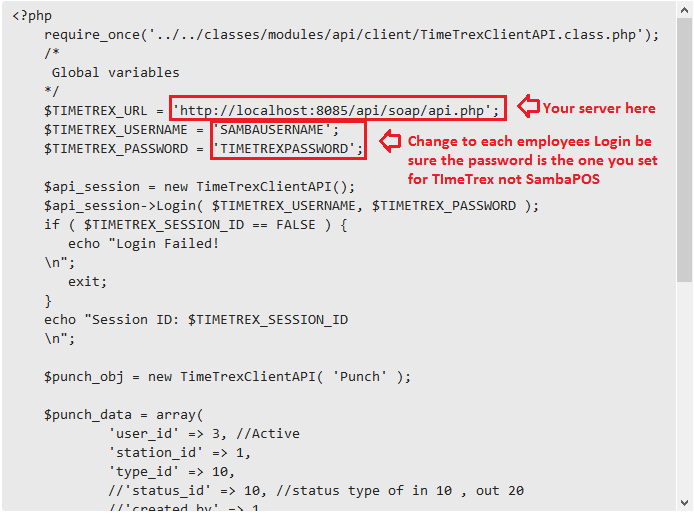 Create a .bat file for each employee named the same as their SambaPOS login save them in the bat folder you just made. Can use notepad and just save file as .bat instead of .txt

Within each employee BAT file put the following code:
Change drive letters to fit your own install.

Create a .vbs file for each employee named the same as their SambaPOS login save them in the vbs folder you just made. Can use notepad and just save file as .vbs instead of .txt

Within each employee VBS file put the following code:
Change drive letters to fit your own install.

Now we need to setup the SambaPOS side of things: 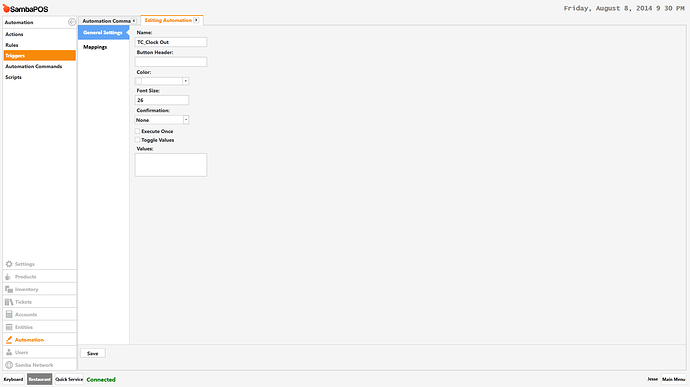 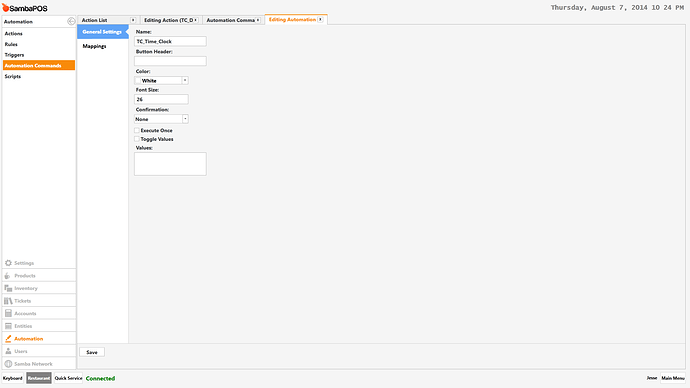 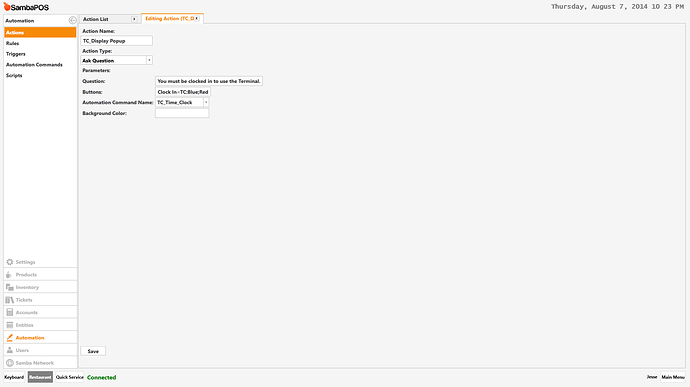 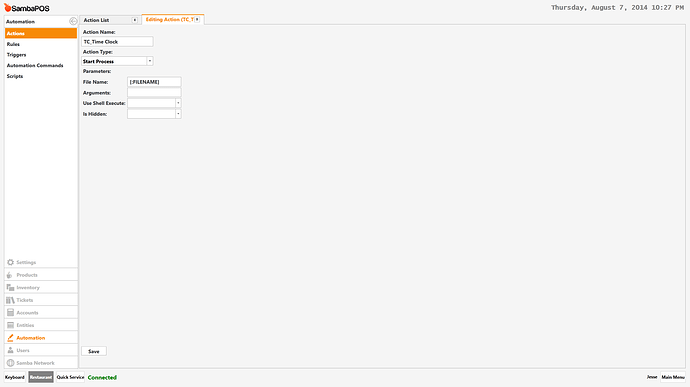 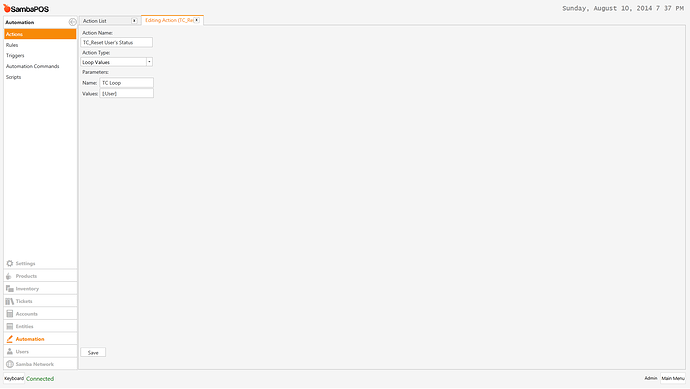 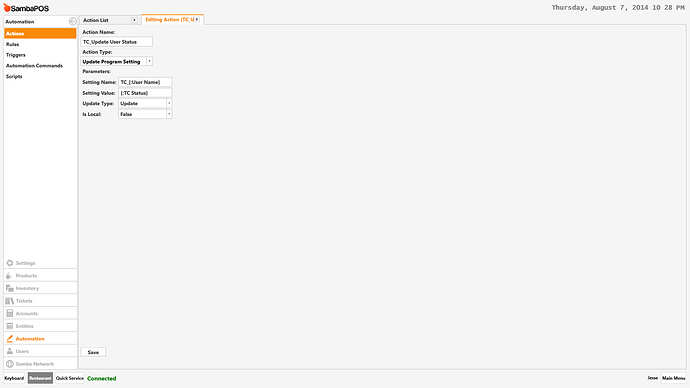 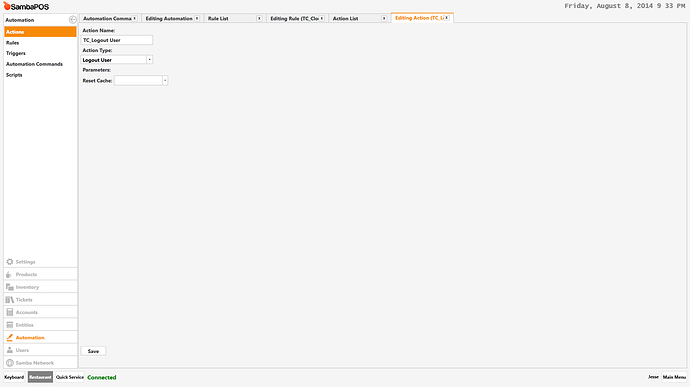 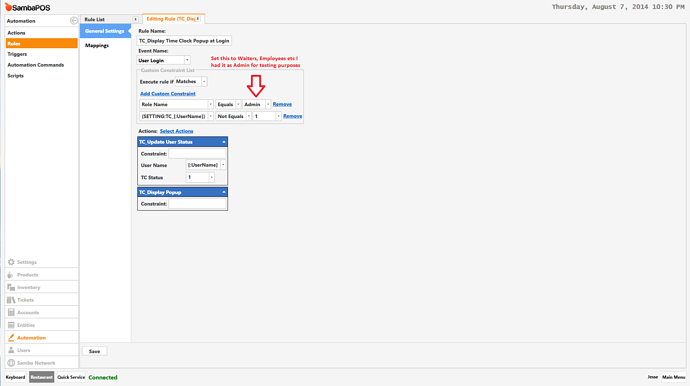 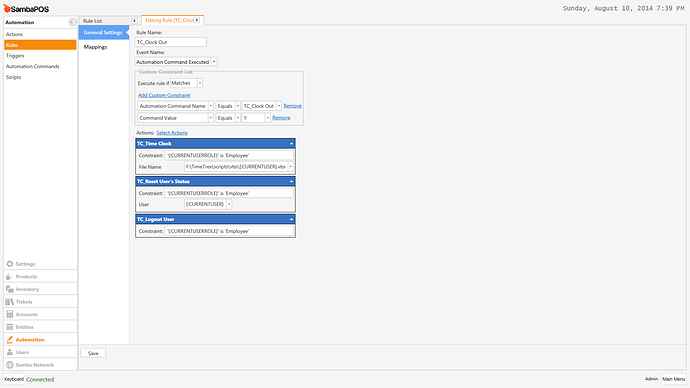 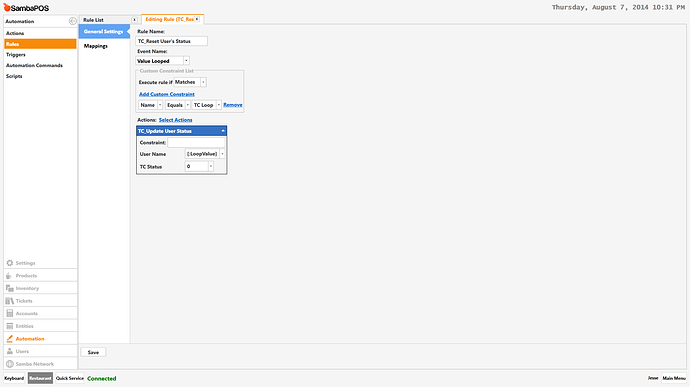 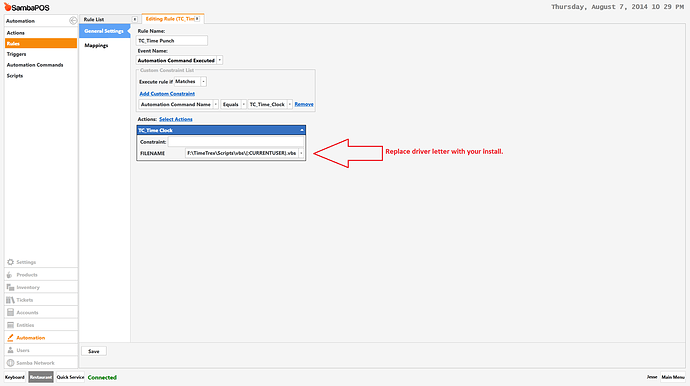 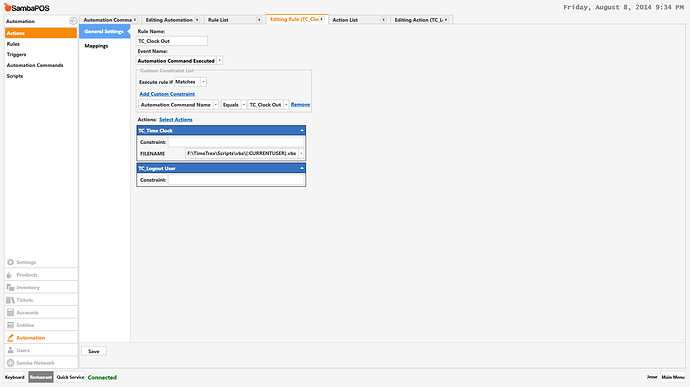 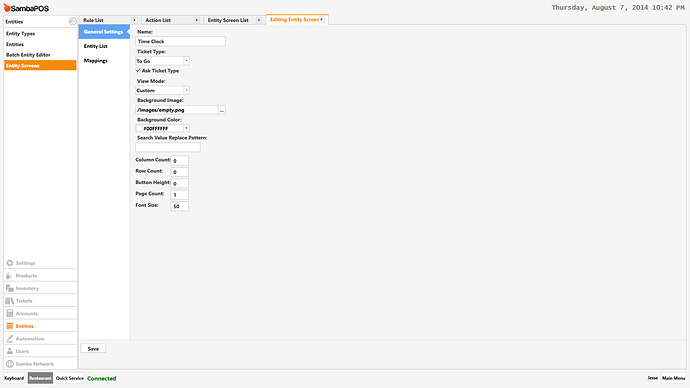 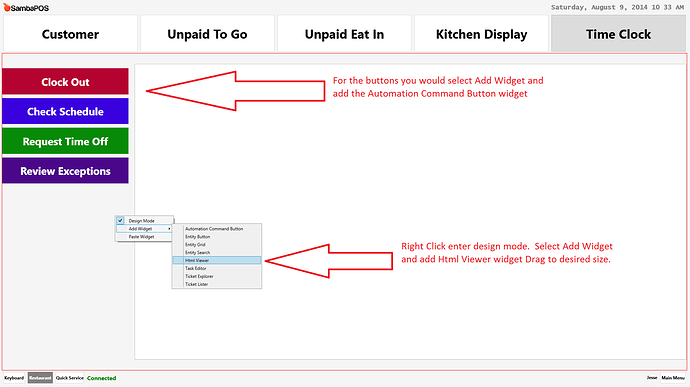 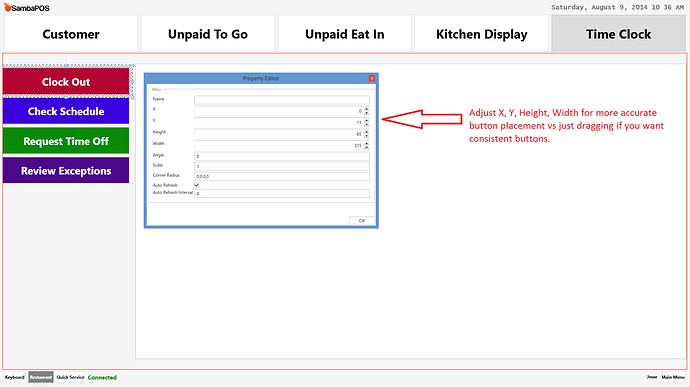 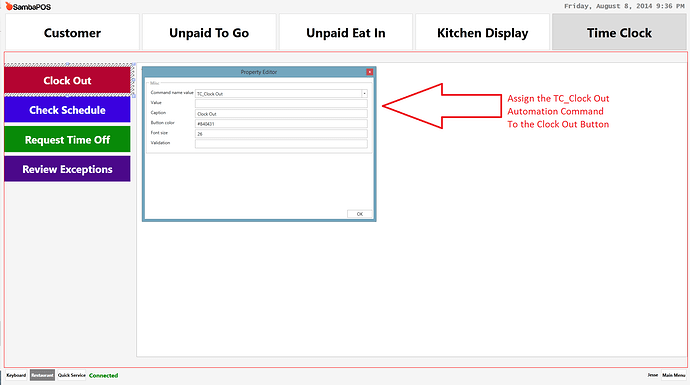 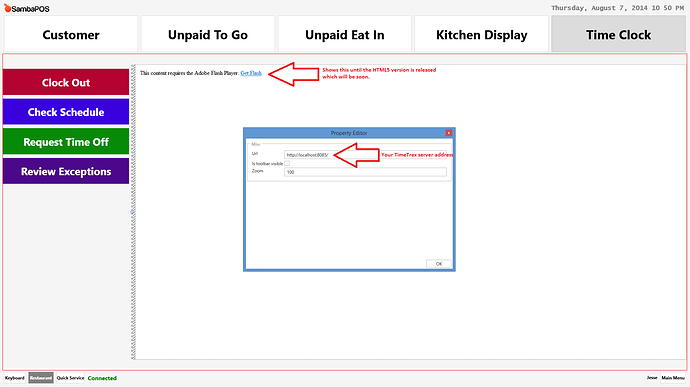 This Tutorial will be modified to include additional functions once HTML5 version is released.

After you import the settings you will still need to update a few of the rules with your specific User Roles / User Names / File Paths you can see the references above for which ones you will need to change.

Added Template TimeTrex scripts. Follow the tutorial on how to edit them. You can just copy/paste for your employees and then edit each one as the tutorial describes.

I follow the tutorial and put in place timetrex and then i launch sambapos with timetrex module, i have same window of you @Jesse but i dont know where i can found the HTML 5 Version of TimeTrex. please thanks for help me.

Spend some time getting used to TimeTrex its very powerful. They are beta testing HTML5 on the cloud version of 7.3.10 so im guessing the local version will be out next month.

The day has come! HTML5 goodness is supported now. They released version 7.4 with full HTML5 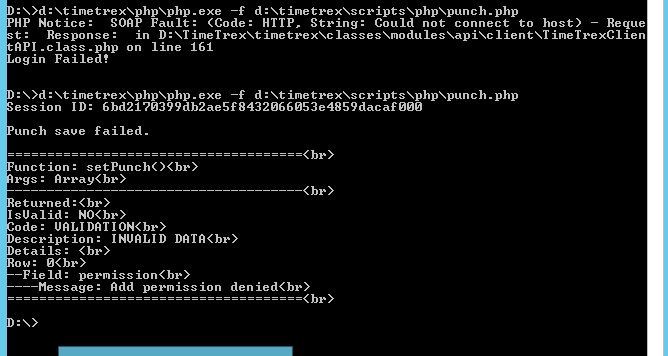 For it to work your users in TimeTrex. have to be configured with the ability to edit their own punches. I mentioned you should get to know TimeTrex really well before you attempt to use it like I showed in the Tutorial.

The tutorial is more to show its possible vs a recommendation. There are ways to prevent users from editing their own punches even though you have enabled it in TimeTrex

Good news is… it looks like you set everything up correctly! you just need to edit the users permission in TimeTrex to allow it to edit its own punches. This is done through Company/ Permission Groups

They intentionally hide the API for the user to just clock… as they want you to buy professional edition to get that access they call it Quick Punch. Technically you can still do it because it is open source but I was not smart enough to figure out the syntax and its hidden from the API.

So my work around until I can figure out how to get the API to just punch vs Edit a punch… is to let the user edit the punch as this feature was not hidden from the API.

I simply restrict users from accessing their punches if they Log in to timetrex. So this way they can not edit it themself… only Samba does.

Well i got it to work by changing the permission the only thing now is that it does not matter what my username is it keeps making punches based on the user id in the php script… so user1 can make punches for administrator as long as the user id matches the administrators. Is this how it works for you as well… I may have missed it but i dont think i saw where we would need to edit this in the script would we?