2 Quick question. I’ve setup refund button to go into minus for refund credit card/cash purposes and that works fine. However after you press refund, currently cannot undo the refund. such as below
<img src="/uploads/default/original/3X/5/4/545767a5bd4e97dd457f26288af7d1503fbf7ca4.gif" width=“690” height=“387”
My first question is, how can we make the refund button into a toggle action so that we can undo a refund in case we refund the wrong item or something along those lines.
When we do a refund, it turns the amount into a minus which is fair enough however, it makes the calculation all wrong

Question 2.How can we make it, so in the case of a refund, by minusing that amount is fine but technically it the item should go to 0. so the amount stays correct, however I had this setup previously to reflect that and it works fine, but then when you press refund, it just makes the amount into a null value therefore it cannot be refunded.

The only way I can get around this is by adding the same item to negate the -22 in order to make the total 0 again before adding something else to make the calculation correct.

Unless something has changed samba cannot settle tickets with minus totals. I originally tried this when starting to create a refund system. Instead i duplicate the sales setup but have refund accounts so the pos works exactly like a sale but the money goes into a refund account to track refunds

Thats news to me, my negative quantity refund works fine… negative total.
Unless its allowed because of the fast cash buttons I have, will check now if my settle screen is like that…

Yep, settle screen works fine, although the items list doesnt show any items I can still tender a negative amount using the all button…;

@Shivan are you clicking all or just hovering over it?
You can still type an amount as usuall but only positive however still works out as if its -2 and you tender 10 its irelivent as change will just be 12 making transaction -2 (2 out of till)
The orders list does seem to not like negative though.

@JTRTech just hovering over it… it is a bit of an odd behavior to be honest.

Maybe we can set up a rule to change price to 0 before ticket closing and after refund has been processed? Don’t know if that’s possible.

@RickH i looked at that post which explains that method of refund, it’s nice for tracking and that is the same as refunding 1 item and adding the exact same item to bring the value back to 0. Except you have it saved as a separate ticket. Not that it’s a bad idea, i just feel as though it’s quite inconvenient to go through all that just for a refund and for it to reflect reports correctly.

If i were to do it like that, I’d have a constraint that takes the highlighted orders, duplicates it into a new ticket ans have the state changed into refund all at the press of the refnd button.but then im still not sure how i could do such an advanced thing lol. Gotta dig up that thread which kendash posted where he selects what orders he wants, presses move or something and it creates a new ticket with those items.

Might get emre to look at s different route when dealing with refunds so the correct total amounts appears on tickets when refunding an item.

I understand refund means money taken out thus the -4.00 however if you put like i showed in the gif another item at 10 value, then total owing is 6… its fine to show it like that but once refund is processed it should really just show $10 and and the item amount reverted to 0.

Really? But what are you calling refund.
A minus item is a credit, refund isn’t untill paid out.
So if you add another order after marking those as refund it becomes an ‘exchange’ and the difference is either paid or refunded…
Other than the order lost on settle screen I don’t see an issue, I and undoubtably many others handle refunds without issue.
For something fairly fundamental and used probably by majority of users if it was a genuin issue there would be more queries on it…

Ok I’ll try to put together something to show what I mean. I think I’m not explaining it properly or maybe I am just taking what is a simple straight forward task and making it more complicated then it is mainly due to the fact I’m trying my best to make refunds reflect accurate numbers on tickets and reports.

In the meantime, is there a way we can toggle the refund off in case of a mistake? The same way Void and gift toggle works?

In the meantime, is there a way we can toggle the refund off in case of a mistake? The same way Void and gift toggle works?

Yes, its not a toggle though, its a seperate automation flow - same for cancel void…
Create a cancel refund button mapped to GStatus=Refund or whatever states your using and the automation to return it to the qty, value etc required.
My negative QTY method just means you would x -1 to refund and do that again to put back to positive.
The negative qty method is simplest as also inverses tag prices etc.

Sorry Im bringing an old topic back. I managed to create the Cancel Refund button
and it works great, except for 1 part of it.

It removes the refund state, and returns it to a submitted state, however the price still stays nil.

I think this is because the Update Order action has the price value of 0.00.

Is there a method which I can use to revert the item back to it’s original price after cancel refund button is pressed?

Below is my rule screenshot. 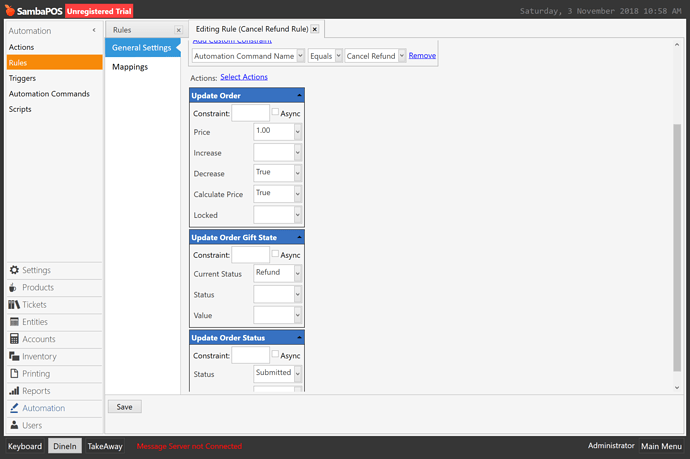 image.png2160×1440 202 KB
I temporarily put the price value to 1.00 so it brings it to a positive state and then I can use price change to change the price accordingly, but it would be nice to revert the price to original automatically.
Jesse November 3, 2018, 1:44am #14

I did look at that. The thing is, when you press void, it doesnt change the price of the item, just changes the state of the order which in return removes it from the ticket total calculation. So when you press cancel void, it just brings the state back to submitted again.

Ill get some screenshots as soon as i finish breakfast. But… the refund button, current changes the total price to 0.00 and then changes the state dur to the update order action. If i remove price in the action, it works exactly like void. Not sure if thats how it should be.

There is a way to set it back using atag . I can’t remember which one. Maybe PARENT PRICE ?