Uhh just rebooted a remote till

Uhh, guess ill be taking a drive in the morning before they open…

All I wanna do is get this new system up for them so they cant BREAK anything, and I end up doing just that

and its 2am lol

oh god, that reminded me of the time when i had finally finished setting up a client system which included 3 tablets, 4 printers and 2 tills, only to have it screw up on me last second and the following day was there official open day!!!

i recall staying onsite till 4:30am making everything from scratch again coz the database file got corrupted when i was transferring the file over to my backup hdd. and i had to be at work at 7 the same day!

It was about 4am when i finally finished.

Left them a love note… and using the add user, i restricted all their access… now they cannot break ANYTHING HAHAHAHAHA!!!

Plan is now to not allow them into the main menu area at all and have a manager functions button.

Plan is now to not allow them into the main menu area at all and have a manager functions button.

How are you doing it?
My plan origionaly when weighing up going big time with reselling tills with samba was a ‘management’ entity screen(s). To create a full feature system with the management screen being used to turn features on and off and do all the on site admin protecting the automation for everything… Would be so much easier if had more control over user roll and management sections access.

Now you’re relating this to the other Topic about creating Users. The original post and topic-name indicates that we want more control over who can access what in terms of the Management section.

For example, when we click “Manage”, it takes us into Management… 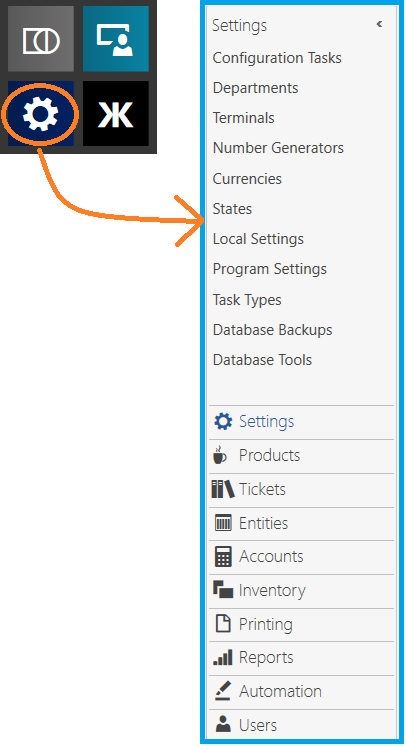 But we have more power now. We can lockout Management Sections individually. So what if we make that gear button take us here instead:

That is a (mockup of a) Custom Entity Screen with Automation Command Button Widgets on it. Each button has Settings something like this: 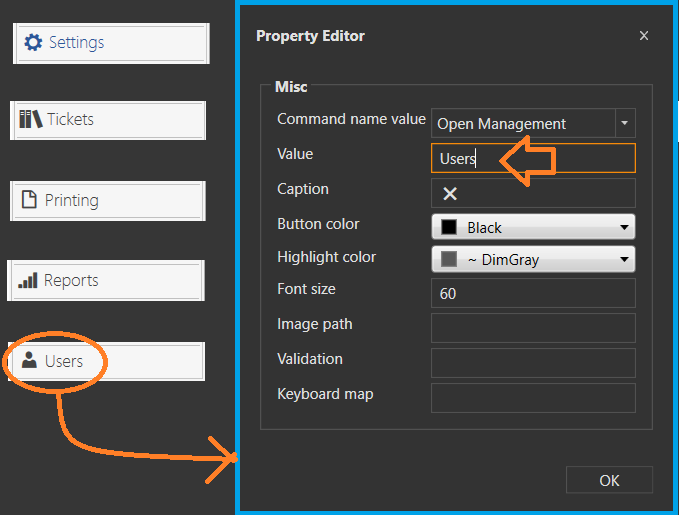 We have this Action: 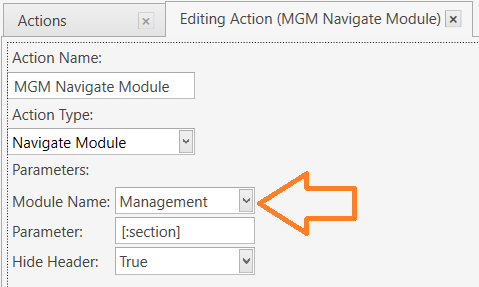 And we have a Rule (or many Rules depending on how you want to set it up) that looks something like this: 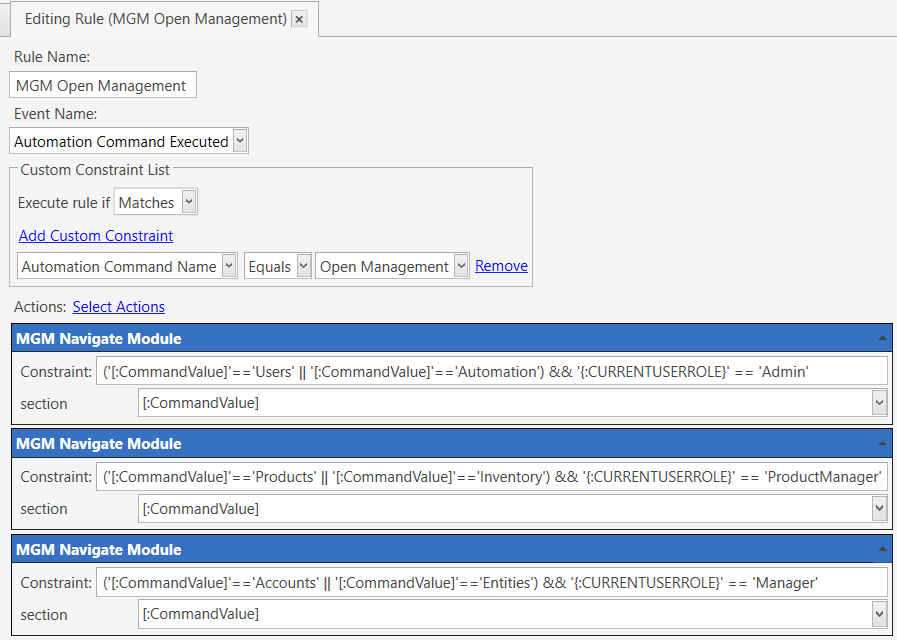 Note that you could also constrain the Rule in the Rule Mappings, to limiti acces to User Role and Terminal.

You could also be more granular on your Action Constraints using {:CURRENTUSER} instead of {:CURRENTUSERROLE}.

You can constrain the Screen too. 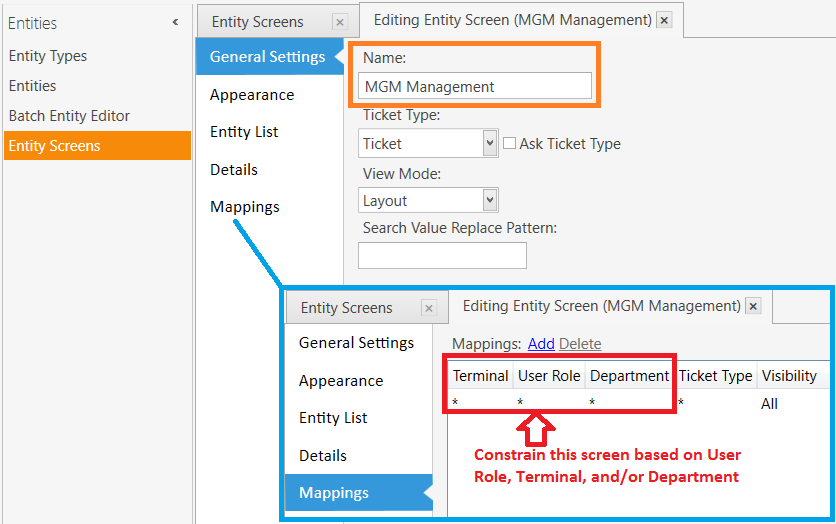 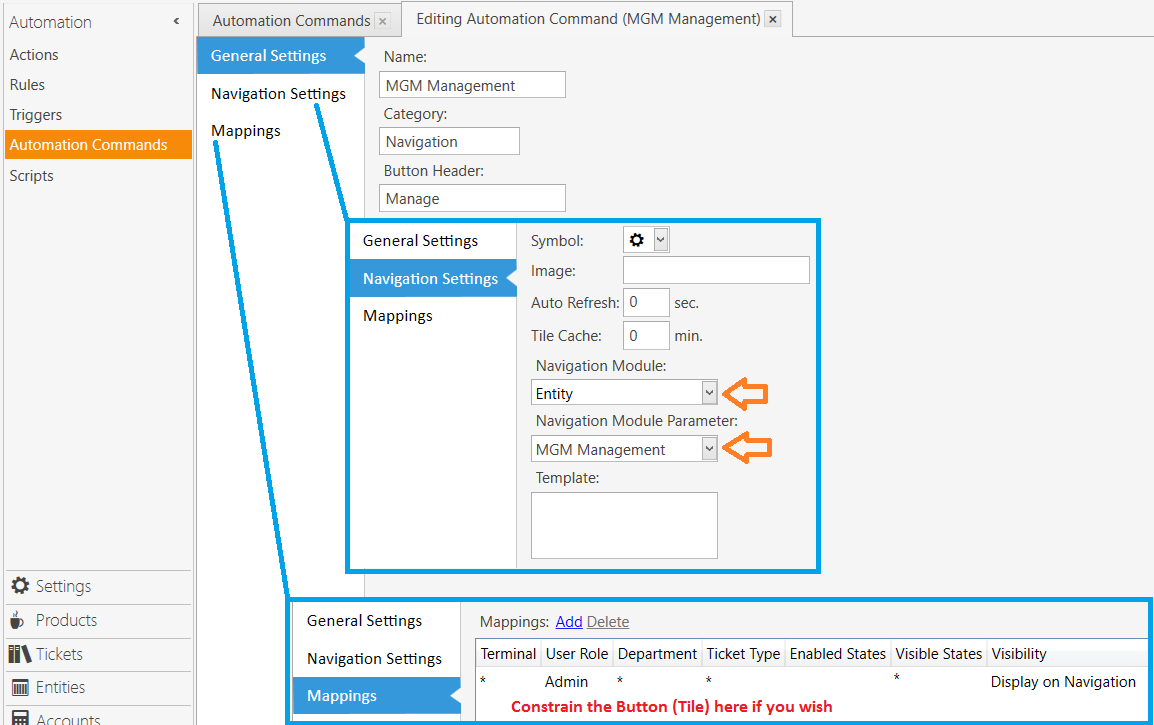 Or the Automation Command within the Entity Screen … 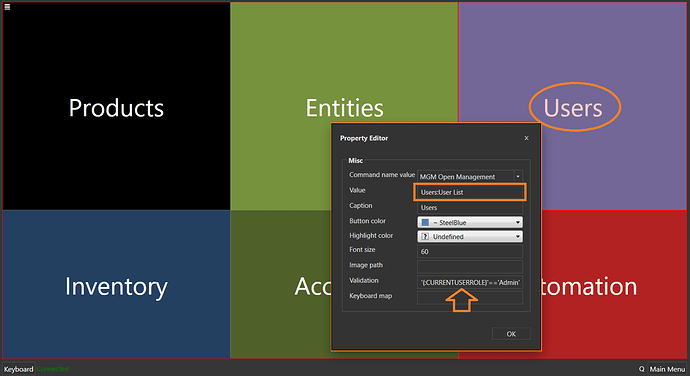 @emre, any chance there is a trick to opening up an entire section, for example if we wanted to specify access to all of Automation, maybe accept syntax like Automation:* ?

It turns out we need to be more granular in our Management Module specification. We currently need to specify Section and Module as sectionName:moduleName …

Really? I didnt try yet as thought it was just section name in the value… Didnt realize we already had ‘module’ level…

The sub-section is required. Without it, all of Management becomes opened up. So if you just use something like “Inventory” as the section with no :module after it, then it opens up like you have full admin rights to all sections.

So, our custom screen starts to look like this, which is a bit of a pain, but still not too bad … 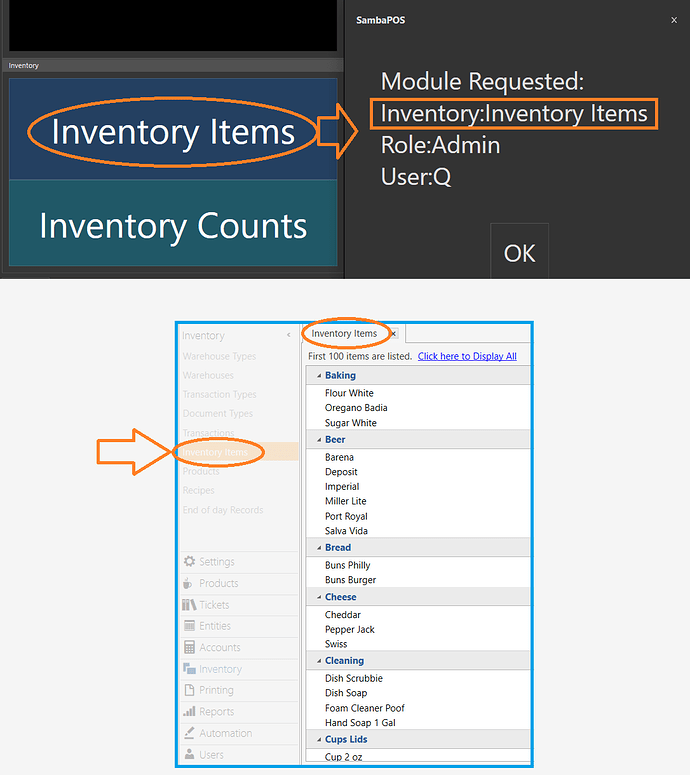 Hmmm, might rethink that plan and have a go them if that is the case

So the button takes you into that section, what about getting back? Menu button in bottom right? Going back to nav screen?

what about getting back? Menu button in bottom right? Going back to nav screen?

Yes. Straight to the section specified, with all others locked out / disabled. Main Menu button is there in the bottom-right as usual, which takes you to main Nav Screen.

Hmmmm, perhaps if posible the ability to specify multiple modules in a list would allow an equivilent to the user roll level restriction via a single nav button.
Would mean allot less navigation to go between sections.
Creating equivilent manage buttons with values relative to the level of access.

I was just gonna use ask question to do it… and have each button as an AMC to different allowed areas?

Ps I’m bloody hanging why do I do this to myself. Lol

A button for them to press

And a popup with things theyre allowed to touch 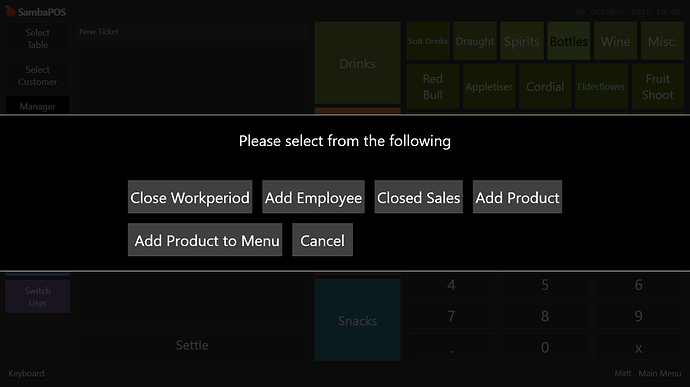 ill open a new topic if it could be done, as I’m no sql master.

it then takes the colour used for the button and adds it automatically… 1 button, 2 jobs.

It should check that the category exists in both otherwise it will return an error message.

I rekon I could give this a shot myself

gave it a shot, but where it looks for MenuItemId isnt created until after product made, so itll not be possible I don’t think…

no more breaking the till moahahaha!!

That’s my buttons on the Generic Question action