I will be starting to create a new system within samba that may be good for businesses in UK selling alcohol. After a meeting with the police this morning I didn’t realise this was law to have a refusals book in place.

Asking if this can be digitalised and how it would work, they agreed it would be a failsafe system.

The proposal is to have a challenge 25 button on the pos.

When pressed it says “Does the customer look over 25” yes,no

“What ID was produced” passport,drivers license, official I’D, Other

“Date of birth on ID”

“Is this ID the customers”

Then a popup that says “This has now been logged”

I would the want it to store the info into a report of some sort but this is where I’ll get stuck.

I’m presuming I would use system setting to store each item in its own entity… but how would I convert that as a report?

You can use ticket logs.

This isnt for a ticket though, it’ll be general report ill be setting up. I dont want it associated with a ticket.

So far I’ve made it do program settings, but cant think how to add the info to the entity… i know i can do it, I’ve done it before

ah got it, was doing it wrong lol

This tutorial may give an idea.

In this tutorial I’ll show you how to implement a Age Check mechanism that is required to sell alcoholic drinks in some countries.

Ill go through it in a sec, got 10 mins before we open lol

You can change it as you wish

aha i got tot eh bottom, thanks @emre .

Will edit for my use. Thank you

Its exactly what i setup and i customised it to add type of id seen and the id number, either PASS id card, photo driving licence or passport

Ill show you my flow when im bk at laptop, once you manage to capture the details in a report could you share, ive been meaning to try that but never got round to it

Add order that is age restricted (alcohol in this case) 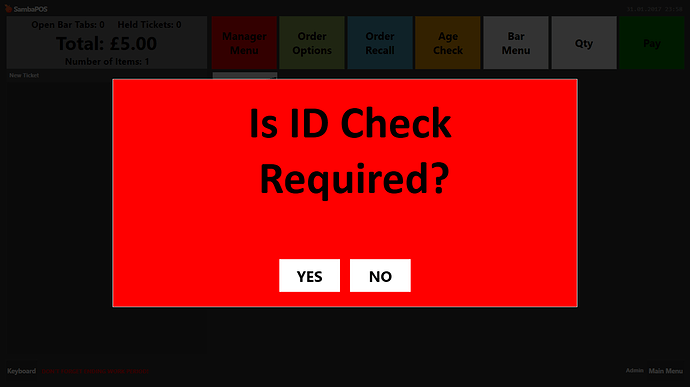 Select yes for ID Check, then enter date of birth 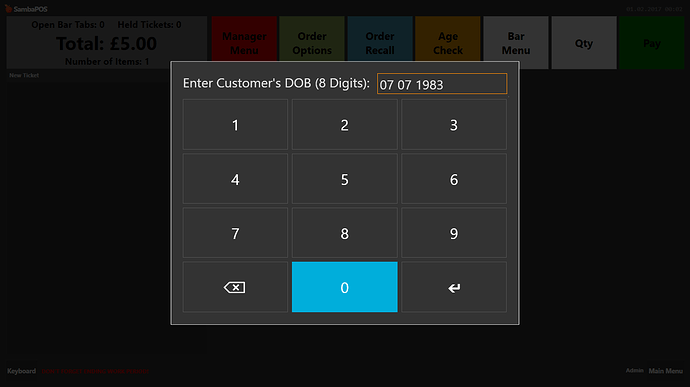 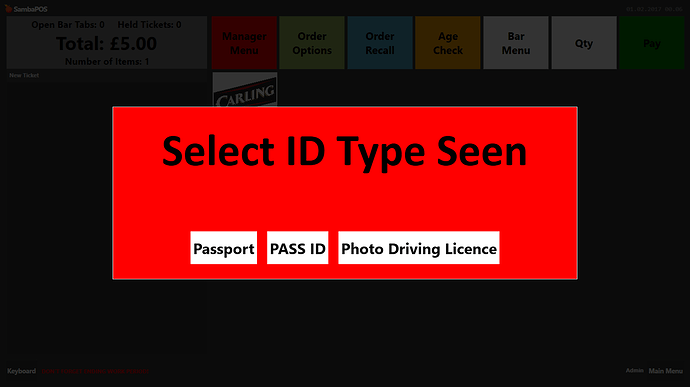 Then enter the ID number 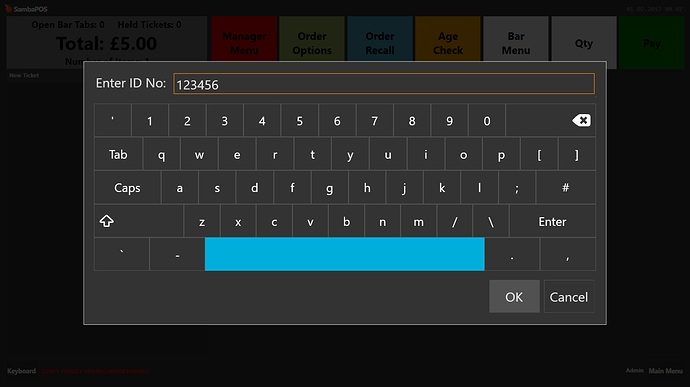 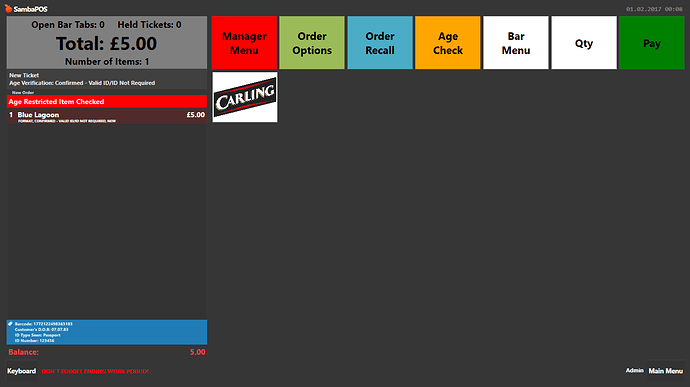 would you do that to every customer Rick? like for example… I have a bar and every item is age restricted… so would that pop up come up every time the same customer comes to the till?

The way im doing it, instead of order added, its simply automation command.

Almost the same layout after as what you’ve done, but how does yours report it?

It comes up on every ticket when the first age restricted item is added to the ticket, just so the is no reliance on staff remembering.

Ive not started to look at how to create a report for it yet, id need two, one that captures the details from the id when the customer was of correct age and another to show the cancelled orders when the check was done

If you enter a date of birth that is not old enough the transaction cancels, ill show screenshots of that bit tonight if i can, i forgot to add that yesterday

I dont think that would be viable here see, we have 5 or 6 staff on the bar fighting to use it every time.

I think the way I have is the best for us.

Im going to be looking on how to report it as this is a legal requirement (i didnt know this) so ill let you know when im done.

Since when?
I hadn’t heared that.
Know the think25 thing got pushed a few years back to if anyone you thought was under 25 but it’s never a requirement to log the ID details each time you check is it?
I mean have never seen Tesco or the likes actually take down the ID details…
Was that some EU red tape BS?

I have no idea, but i have a problem with an old lady I told to fuck off is trying everything she can to get me closed down.

I had the police and licensing in yesterday tearing apart my business model over 1 complaint of noise (im sure they have better things to do) but being new to her job I suppose she just wanted to sink her teeth in).

They asked to see my Challenge 25 Log, I asked her wtf she meant… and she said it is a legal requirement to log every time a person is asked for ID.

I asked her if all licensed premises have to do it, she said yes

I asked why tesco dont do it she said they do

I then said well ill do the same, on a till like they do… she said thats fine. How will you log their name?

I said the same way tesco do… she shut up…

sorry im ranting… it really got to me… same with CCTV, she wanted to see my CCTV log under the data protection act blah blah… apparently every time i search the CCTV i have to log it… under data protection laws. Im also not allowed to have my CCTV shown in public… apparently, even though tesco do at the door…

i really wanted to punch her for being so nit picky

Ive finished most part of the till system now, I just have to make it create ticket tags so I can create reports

So far I have this: 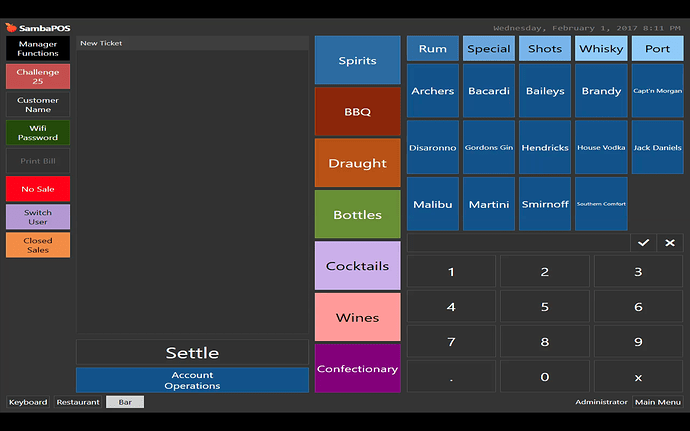 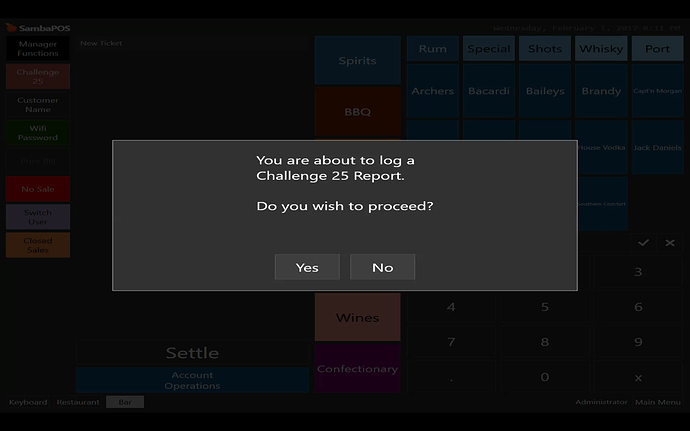 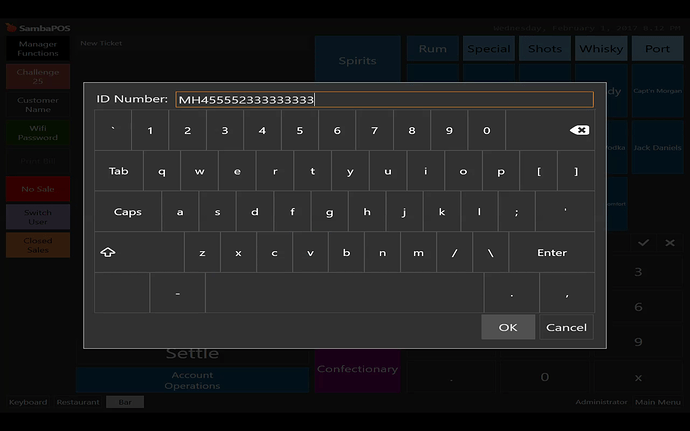 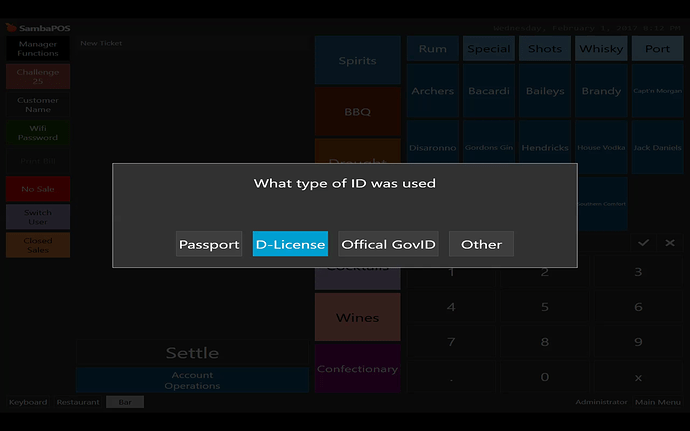 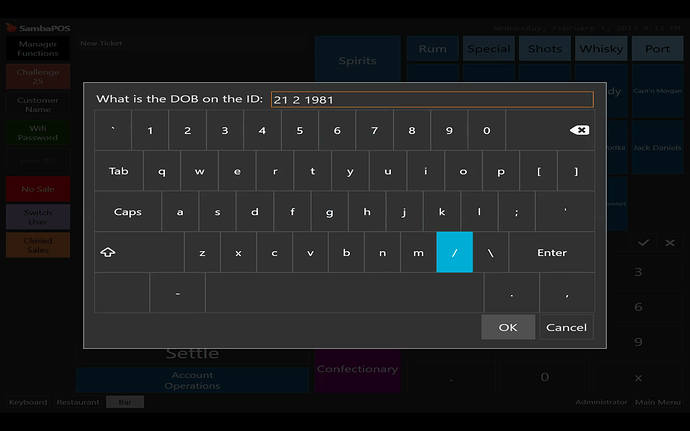 If yes pressed it just says a report has been submitted 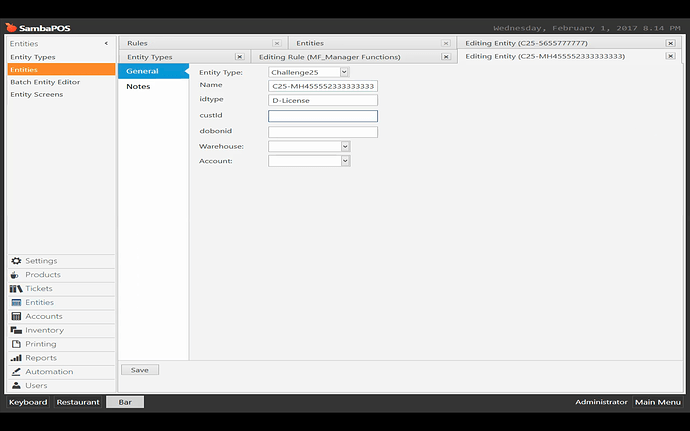 Its not filling the info out atm… dunno why, must’ve done something not right ill check in a sec

Pics in squishy vision as im using remotepc from home

an old lady I told to fuck off

Something you might want to look up on is the local regulations of noice levels and times.
During the day there is very little restriction.
In the evening/night it is lower but from experiance (or at least it used to be) that the specified noise level is to be recorded AT THE BOUNDRY/LOCATION OF THE COMPLAINT… NOT ONSITE in the middle of the bar. so dont let them give you shit stood with a desabel meter reading from inside.
If you continue to get noice complaints a tip is tto invest in a desabel meter and take routine readings at the boundry of your property and log the readings from peek times.

They asked to see my Challenge 25 Log, I asked her wtf she meant… and she said it is a legal requirement to log every time a person is asked for ID.

Interesting. Have you actually checked online?
We had a copper in the par ask to see the personal licence holder on duty and said there needs to be one working at all time, although it might have changed after looking into it you didnt actually need one onsite at all times, it was purely a recommended practice to show diligence for the DPS. They were incorrect to make that claim and had themselves misunderstood the laws they were referring to.
I beleive you need a personal licence holder for autherising an under 18yo to serve a drink which is another one people have misquoted to us a few times when our main waitress at the time were still 17 and working on the bar.
In theory they are allowed to serve drinks so long as supervised by a personal licence holder.
In the same way the checkouts at the local supermarket have to ‘call a code 18’ when someone buys alcohold and a supervisor comes over and gives them the ok (doesnt take over just aproves the service)

The CCTV thing has always been a merky area, I thought you couldnt share video on FB etc but have seen several local places like the cinema in next town post their footage on FB asking if anyone knows anything…
But you couldnt see their faces etc which I think might be a factor in the same way faces are blured on reality shows where they havnt given permission to be recorded but that sin a public place.
You cant have CCTV recording a public space as its about permission but if signed obviously they accept CCTV when entering.
As for the screen like you say tescos often have a screen on the enterance showing a couple of the camera feeds.

During the day there is very little restriction.

the woman came in abusing me and tracey (wife) during open hours with customers in. She made customers leave, thats why i told her to fuckoff.

She lives 10 miles away, if she can hear the noise i would be impressed, she’s the landlady to the shop next door.

She lives 10 miles away, if she can hear the noise i would be impressed, she’s the landlady to the shop next door.

So she can claim complaint from there then I guess.
As I said check the dB limit and times for your local licencing agency so you are up to date on the actual limits.
Maybe download a dB app on your phone for a rough idea and just double check an aprox level from just outside during a peek time to make sure you are within the limits and maybe just turn it down a notch for a short time and allow it to blow over.
My parents had nothing but issues after being rash about similar complaint, it only takes one busy body like that to cause you no end of hastle. Next it will be picking on signage etc and if you have aproprate planning permission for signage etc.