I’m working on documentation for States, and I’m trying to figure out the Update Order State action, but I’m a little confused as to what all the parameters mean. 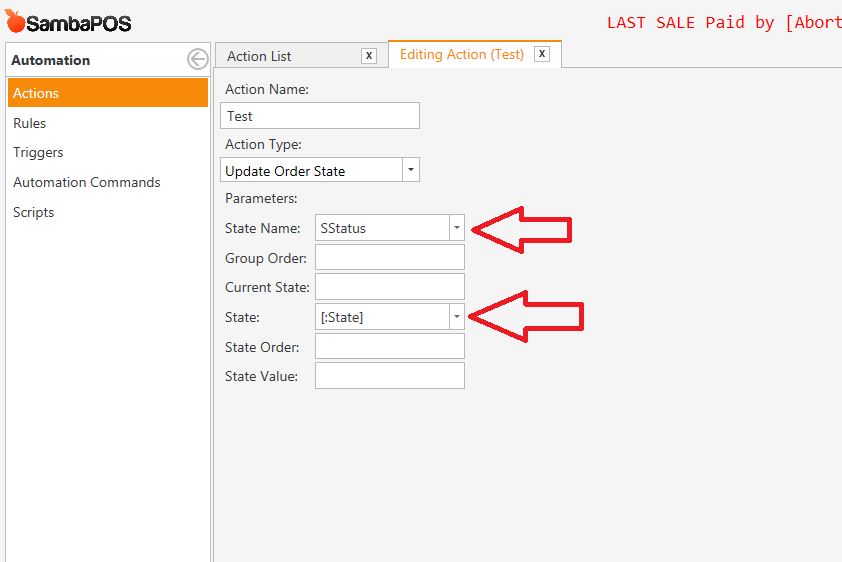 State Name is Group Code
Group Order is Order it shows on ticket
Current State is Current State so it will look for that state as a check.
State - State your modifying
State Order - order it shows on bill
State Value - Sub Value of a State. Example… GStatus uses Status with Values as the actual state it enters.

Thanks for clearing that up @Jesse.

I don’t really understand this though:

GStatus uses Status with Values as the actual state it enters

Can you give me an example of this?

Maybe I’m explaining it badly. That is a tough feature to explain.

That is a tough feature to explain

The whole States part of SambaPOS seems like a tough feature to understand to me, that’s why I thought I might try to figure this all out and document it

I’m not sure what’s happening with the void rule:. 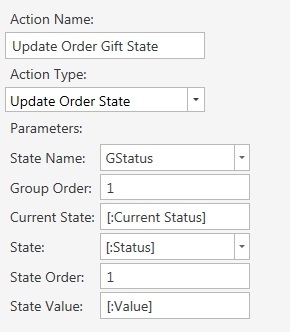 It seems like the Void button updates the GStatus group’s Void state of the order to the value of the button? When does this value get set?
Or is that not what [:Value] means in the rule?

Is it like a sort of ‘tag’ for the state?

Is it like a sort of ‘tag’ for the state?

Yes. For Void case we use it to store void reason.

Thanks @emre, I understand now.

Just found the tutorial explaining this:

That was discussed multiple times but as I couldn’t find a tutorial about it I’ve decided to prepare a short tutorial about it. Configuring Reasons Edit Settings > Automation > Automation Commands > Gift Fill Values section with reasons. [image] After saving it create a new ticket and gift one of them. You should see reasons listed right section. [image] Select one of them. [image] Reports will display with reasons. [image] You can also implement void reasons by editing Void comman…

So I guess the [:value] set in the Value parameter of Update Order Gift State is a shortcut for ‘Command Value’ in the rule…

Update Order Gift State action’s Value parameter should be linked to [:CommandValue]. That was a bug coming from early V4 releases. I think that confused you.

I see, so the rule won’t work unless I change [:value] to [:CommandValue] ?
EDIT: Yes, as discussed in the tutorial I just linked to

Now that we’re at it, I would also like to understand these parameters for Update Ticket State:

Quantity Exp is useful to store incremental values. For example configuring it as +1 will increase state quantity by 1 on each call.