I have an urgent problem to solve.

From that topic, I use:

Rule - I use these 2 action in the ACM Auto Print Rule for Cash:

This is for Cah, I did the same for Credit Card and Account

Every time a ticket is settles (Cash/Credit Card/Account):

However I can have 2 or 3 Tickets printed with the same SerialNumber …
Lots of handwork to correct.

That’s urgent I am live

(we are working with tablets remote conection to a single windows computer and samba is running on 2 or 3 windows users on that computer.)

Don’t do that ^.
Don’t hard-code things like Program Settings into an Action.
Instead, use a [:variable] for Action Parameters, and set the Parameter for the Action in the Rule.

Remove that ^ Action from your Rule, and Save the Rule.

Open the Rule and add the Action back in. You should now see a field for serialNumber in the Action.

thanks …
I think I kindof understand
as I am live, a question:
MyNumber is right now :160785

Doing what you say, the serial number will still be incremented FROM that value?

the serial number will still be incremented FROM that value?

Yes. The Program Setting is stored in the Database when IsLocal=False.

My problem was different but in any case I am using your way of doing (variable) now to update a ticket tag.
My problem was:

When cash, rule was:

When Credit Card, rule was:

Every error is good

There is more than that …

Here is what I have: 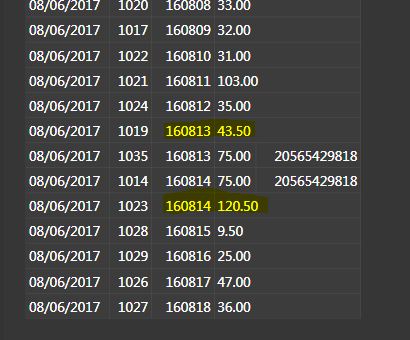 MyNumber is generated at payment time, when automatic printing.
(Btw the 2 bills of 75.00 are really 2 different bills, it’s a coincidence if they are the same amount, it is not twice the same ticket.)

Now we can see that MyNumber (which should be unique) is repeating.
Waitresses work on 2 Tablets that RDP to different windows users on a single computer.

It looks like that tablet 1 still think half an hour later that the global variable is 160812, increment by 1 and print.
I am lost …

I am digging, I will restart the whole système and watch the ticket closing … hope that by tomorrow the problem has solved because this ticket number is really important.

1 computer running windows 7
5 users (4 waitresses + the server)
Only 1 terminal defined (the default : Server)
Other user has no special terminals defined (Terminal Name : blank) after double check this is NOT TRUE (Terminal Name = Server)

I have this problem ONLY when 2 waitresses are working at the same time.
When only one waitress works, MyNumber are serial without double.
Here is an example, I also check for the 9 days, same behaviour.
one user ok (yelow)
two users double

It looks like they each have their “own” global variable, Does IsLocal:False work ? Where can I check that setting (SQL?)

No they dont have their own value unless you set it to do so.
IsLocal: False works.
You can use SSMS to open Program Setting Table. Or GQL or Show Message to read the number.

Do I need to setup the message server/client?

Don’t think it has something to do with that.

Here are my actions/rules, there is not that much.

Do I create an issue topic? 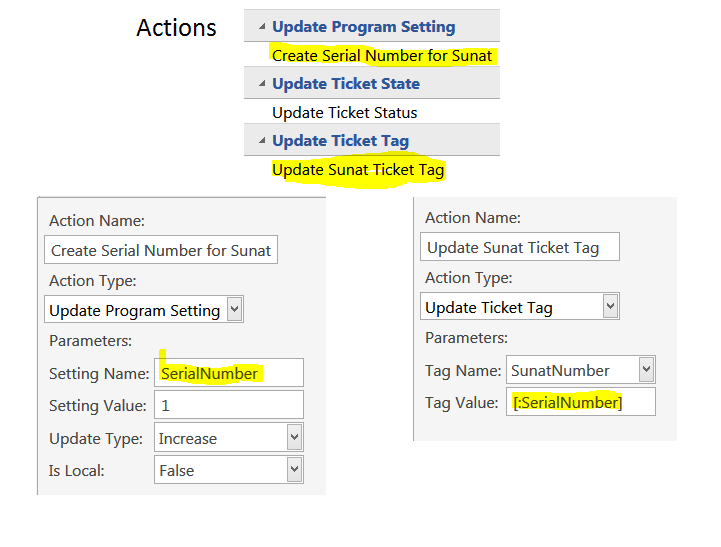 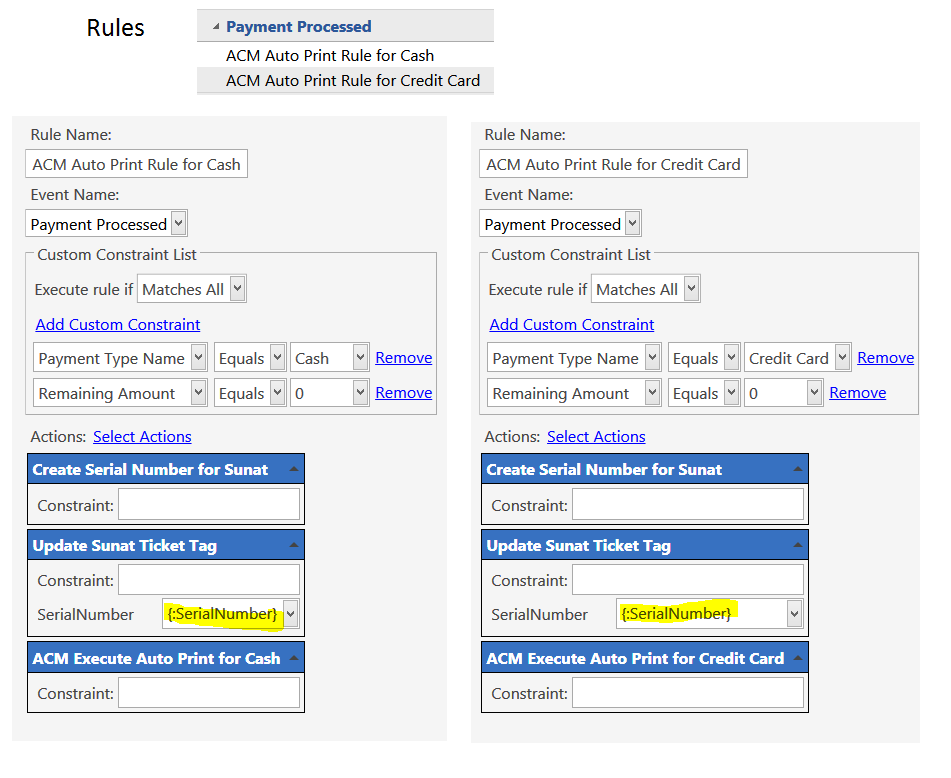 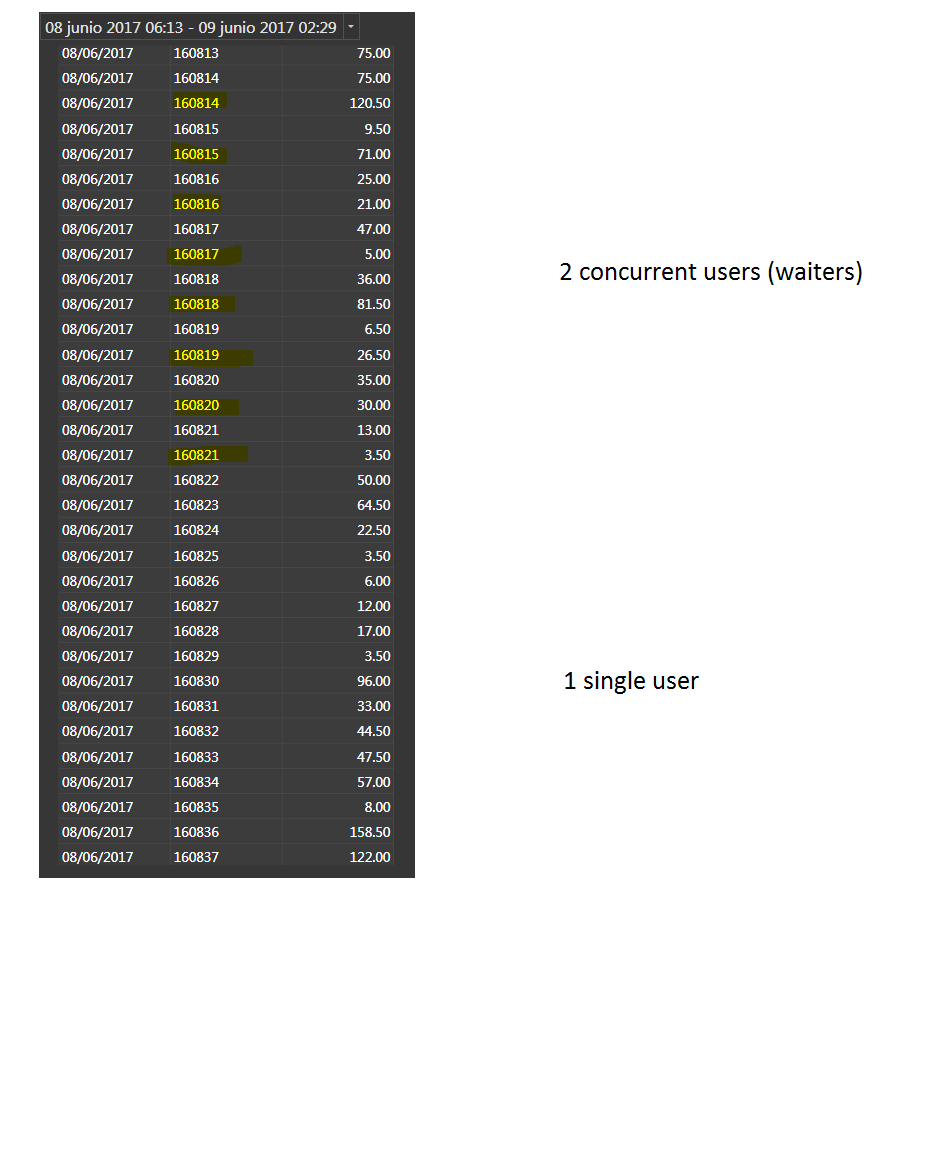 Theoretically yes, though I rarely ever use the short-form, since I am used to that form being Local rather than Global (throwback to older versions). You can force selection of Local (read fro memory) or Global (read from DB) Program setting with:

How to sql the {SETTING:SerialNumber}?

Global Settings are stored in the DB Table named [ProgramSettingValues]

Theoretically yes, though I rarely ever use the short-form, since I am used to that form being Local rather than Global (throwback to older versions). You can force selection of Local (read fro memory) or Global (read from DB) Program setting with:

I replace with {GLOBAL SETTING:SerialNumber}
Up to now it works … no more double numbers:
Numbers in yellow are generated since I have done that change.

That also means that IsLocal : False does not work or that I understand it bad. 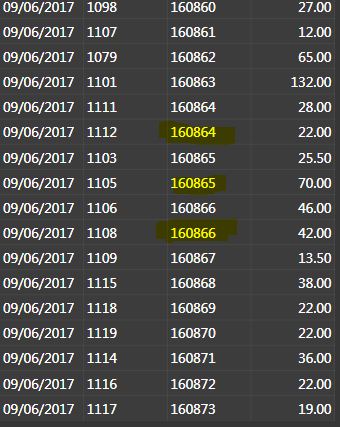 That also means that IsLocal : False does not work or that I understand it bad.

IsLocal=False does work. Never had any issues with it in 5 years. Possibly you have an old version of the Action cached in the Rules. Remove the Serial Update from the Rules, save the Rules, add the Actions back in, and Save the Rules.

V4 way a long time ago

and much has changed. I suppose it is possible that some optimization is creating a race-condition and the update is not occurring fast enough before the Ticket is Tagged. 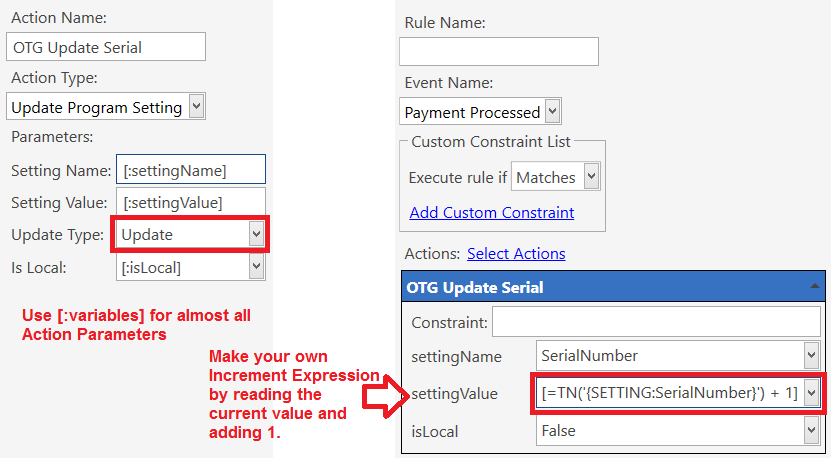 How does this ms sql server works?
Each windows user make some transactional table before updating the database?
It smells rare
Times are the same for the 4 windows users (Lima)
(I cannot test … I have to wait to have real tickets and check them … it takes time)

I generate the Serialnumber in PaymentProcessed so at the closing-for-ever time of the ticket, which is the time I can see in the ticket list Op-Cls column

It has newlines in between the previous report 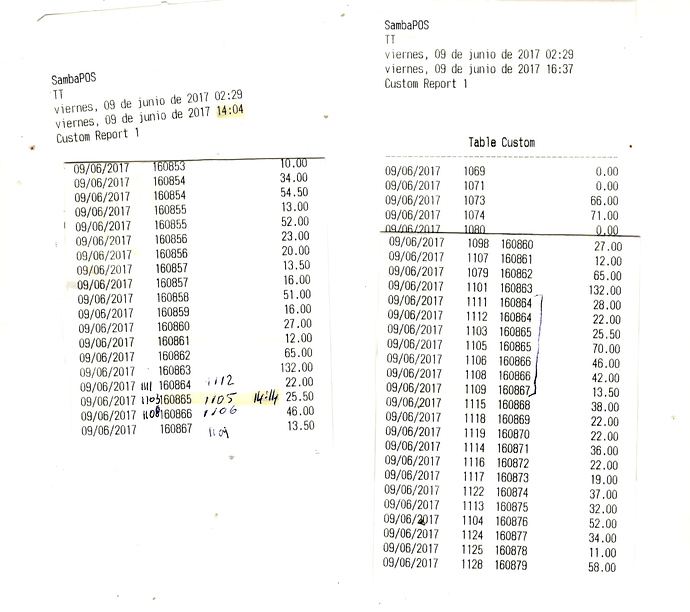 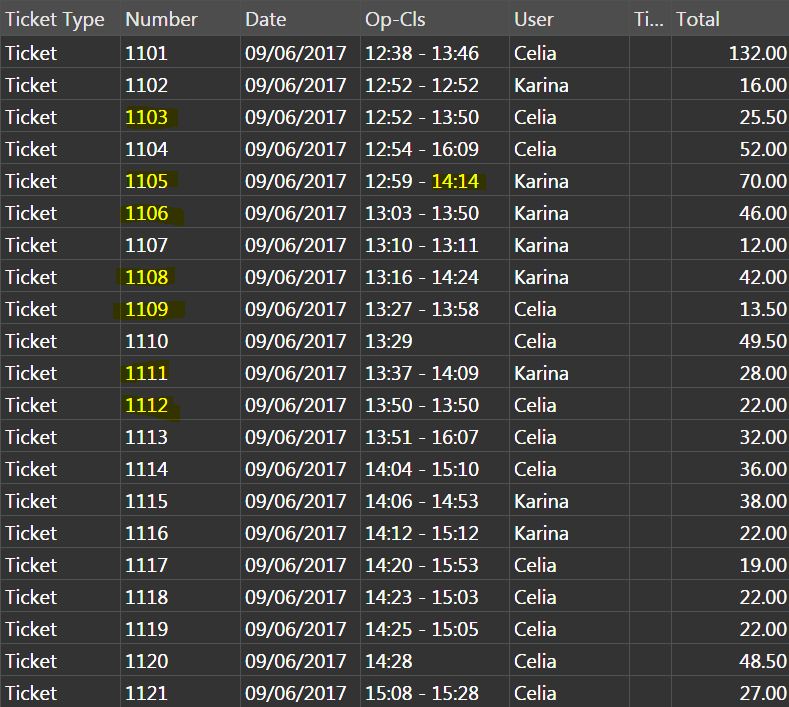 In case of here is my report:

Are you merging tickets?

So if you merge a ticket the original ticket stays there but will be blank.

A merged Tickets will leave Tickets with 0.00 balance so you can see them pretty clearly in the Ticket Explorer.

I am wondering if your Rules are not in the correct order for what you are trying to do.

Maybe you need to move the Ticket Tag assignment into another Rule or something. Rule ordering can be important sometimes though.

We also have an Action for Mark Ticket Closed. This is probably only in a single Default Rule named Ticket Payment Check which is a Before Ticket Closing event.

Looking at Rule Debugger, we can see which event comes before which when a Ticket is fully Paid, and it is the same order as I listed above. You can ignore the Automation Command Executed Rules 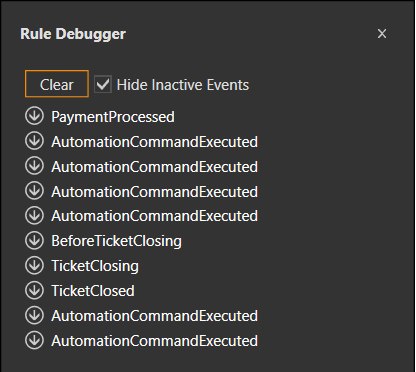 Pick out important Rules and Actions … There is a lot more going on in my system during these Events; this is just an example… can you see anything strange in your Debugger?

Or is it that
the merge tickets goes through the PaymentProcessed method but are not printed because total amount = 0 ?

In these case I still don’t understand why I got a previously assigned number.

Rule debugger ?? a new thing to watch at … Where is this?

Using a global program setting value as a serial number works very well. I use it in my setup daily without a hitch. The actions work just fine and its not something with MS SQL. It more than likely is something with your rule configuration or actions or combination of the both. It can be anything really. We just need to figure it out.

In these case I still don’t understand why I got a previously assigned number.

Using program setting to do what you are attempting to do can be tricky if you have a complex flow with multiple terminals. Remember it is fully dependant on your rule flow and what the event does and how it interacts with the built in hard coded system to prevent duplicate tickets if two different terminals taking orders at same time.

If you are merging tickets… you need to account for that with your system that you built. Same thing with any other automation you might be doing.

I may have missed this a long time ago but you are aware that we have {TICKET ID} which is a unique number not the same as {TICKET NO} right? Every ticket is assigned a unique TICKET ID even the voided or merged tickets.