I have been trying to implement user entities instead of the default users.
Basically I have a entity screen with buttons for each user entity. the pin login can be too slow at peak times and its easier make a mistake.

The issue I am having is unlike default behavior where the user is assigned per order (Administrator & Staff)
If user1 (entity) selects a table which has another ticket opened by another user2. Then User1 can not view the existing ticket and It creates another ticket. These tickets cannot be merged without changing the user entity on one ticket to match the other. 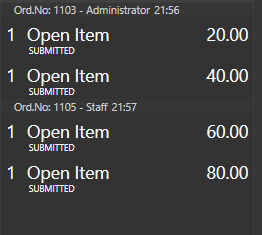 Is it possible to have user entities behave similar standard users or is there a change user action I may have missed?

Are there any details about switching user via this new API?

Switching user?
From my understanding of the basics the user name is defined in the code used so you would need to create a way to select user.
The user value is just like user of any API, if you want to have pin say you would need to add code to lookup and check pin.
Logout etc is erelivent on an API as it just uses the user value when query db,nap if you were looking at a HTML pos interface the login process would be down to you most likely with username being a variable set in code on login.

I want to switch users within sambapos not in external application. I want to have menu with user names, at the minute i’m using entities but theres an issue when a user wants to add to another users ticket. If I could use standard users and switch via automation then this would happen by default.

So switching entities not users? API is mainly for external use, it is a pragmatic GUI-less interface.

JTR the API can be used inside SambaPOS or external.

Currently using entities but I would like to switch users

Silentbob sorry for the confusion. New API does not provide a Switch Ticket User functionality as a single operation. It only allows you to change a ticket’s user. As we provide more examples about API usage you’ll have better idea about how to use that. For now I released it to demonstrate what it does and it is still under development, functions or parameters can still change so there is no complete documentation yet.

Will there be any methods to change users within sambapos added eventually?
Or maybe a select option instead of the pin login?

Ive adapted what kendash did so the setup only has 2 users, admin and cashier. Log in with cashier and this opens an entity screen with a login area, staff swipe their card and it log them in and assigns their entityto a ticket

I have already configured user entities except i’m using a custom menu instead of the entity screen.

The issue I’m having with entities is if user1 (entity) selects a table which has another ticket opened by another (user2). Then User1 can not view the existing ticket and It creates a new ticket.

I have resorted to using an employee ticket tag instead of the entities but I’m not sure what effect this will have on reporting.

I would prefer if it was possible to use the default users so either a change user action or modifications enabled on login screen to achieve the user buttons I would like. Pin login is fine on tablets where user can stay logged in but on main POS it is alot slower than just tapping user name

I don’t see the point in reporting by users on a system where users have no security like pin.
I would just get an MSR or RFID readers.
Either way, other than mapping buttons I don’t think there would be many differences, reporting might need some tweeks.