Just want to say, this is a fantastic bit of software. I’ve really enjoyed the customisation aspect of the software, it works an absolute treat! I’ve done a bit of searching around but I can’t find the answer to the question I have, so I hope people don’t mind I’ve asked it.

I’ve customised a Delivery setup as per the V5 Custom Package Delivery, so everything is the same. On the delivery entity screen, I just want to display (on the ticket lister widget) the amount of minutes since a ‘deliverer’ has been assigned to a ticket. This is so I know how long the deliverer has been out on a delivery for. Does this make sense? I have been trying to use {ENTITY STATE MINUTES:Deliverers}, but I’m not sure if that’s the right syntax.

I’m already using {CREATION MINUTES} to display when the ticket was created, but ideally would also like to display the above too.

I hope I’m being clear, and I look forward to hearing that it can be done!

The state you are using if you followed tutorial is Delivery, Deliverers is the Entity Type not a State.

Many thanks for getting back so quickly!

Yes, I’ve tried that, and it just displays the following

The entity state is most definitely Delivery as you have stated, even checking in the Actions setup, etc. Any ideas?

That means its not got access to that tag.

How would I gain access to the tag? Is there anything I can show you to help?

We can do some tests… one second… first make sure that State is spelled and named EXACTLY as Delivery make sure its not delivery or DELIVERY Case sensitivity or spelling can be a breaker.

Actually lol I think it should be {TICKET STATE MINUTES:Delivery} let me confirm one sec. Yes sorry I told you wrong… try what I just said. It was a Ticket State not Entity State ./slaps forhead.

That has worked a treat! Thank you my good man, really appreciate it!

My next question is this (please let me know if I should start another topic for this): I also have a Completed Deliveries Ticket Listing on the same screen as the right most column. Is it possible to view Closed Tickets (after settling payment)? If I use the current syntax as I have done for Waiting and Delivery orders, it just displays the Ticket Amount, but no customer data, or who delivered it etc.

Can you show a screenshot? I am not sure I understand completely.

Of course: here we are: 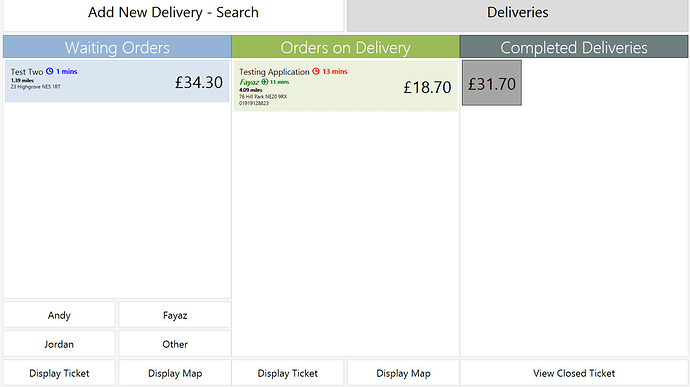 So as you can see in the rightmost column, it just displays the price, without any of the customer or driver details. The code is the same as the other two columns. I hope that makes sense.

I will have to study how it works I do not use this feature so I dont have it installed. I have an idea of what is going on but to be sure give me a moment to study the tutorial.

No problem, thanks for looking

I am fairly certain you need to load the ticket first and it must be reopened. You should probably use a different method for showing delivered tickets… I mean you must consider your flow… how would you decide when to clear the screen of Closed tickets?

In all honesty, it’s not a vital feature the more I think about it. It’s more a case of just seeing how many deliveries got made at a glance, to where, and who did the deliveries. It would get cleared at the end of the work period.

Well you could use REPORT tags and build a custom report for that. You can even use the Custom Report widget to put that report on the same screen.

Its long and intimidating at first but this is the best resource we have for custom reports. Highly recommend checking it out.

I shall have a go at that. Thanks again for all your help. I definitely need to look at Custom Reporting as I would like to generate custom end of day reports. We receive paid and unpaid orders via Just Eat etc, so I would like to show divisions on orders that come via that service etc. Should be fun to figure out though!

I’m now going to try and add delivery charges determined by distance brackets. Going to look at the tutorial for that!

I’m now going to try and add delivery charges determined by distance brackets. Going to look at the tutorial for that!

You can integrate Google Maps for that and use their api to dynamically generate that.

Here is the setup to charge the customer for delivery only if the distance is more than 10 km Create required script from Automation > Scripts Name = GoogleDistance Name it anything you want really Handler = gmaps function gdistance(origin,destination) { var nl = '<linebreak/>'; var u = 'http://maps.googleapis.com/maps/api/distancematrix/json?origins='+origin+'.&destinations='+destination+'.&mode=driving&language=en-GB&sensor=false&units=metric'; var alldata = web.Download(u); var jso…

I’m currently using Google Maps API to generate the distances that you see in the screen shots above. But what I’m trying to do is add the delivery charges that we have in place dependent on distance. I.e. Deliveries between 0-3 miles are £1, 3-5 are £3, and anything over 5 miles is £4.

I’m using a script that I’ve seen on the forum that I’ve seen returns a fee value: Advanced Tutorial: Automatic Delivery Charge Based on Distance via Google Maps

But I haven’t quite figured out how to implement this as of yet. I have the script in place. I think I just need some Rules in place which adds it accordingly.

But I haven’t quite figured out how to implement this as of yet. I have the script in place. I think I just need some Rules in place which adds it accordingly.

Ok I understand you now. Hmm let me take a look… I think if I remember he didnt cover that in his tutorial it was an understood portion.

EDIT: Actually he shows the action and rule required.

When you attempt to implement it and you get stuck show us what you have done so far and we can help you.

Ok, I think I’ve got the hang of this. But I seem to have a problem with Settling a ticket with a delivery charge.

However, when it comes to settling the ticket - it recalculates the item prices so they are now £3.40 each, so the order value equals £6.80. How do I stop it from doing that, and ensuring the delivery charge remains a separate charge, and the item prices retain their original format of £2.90 each? 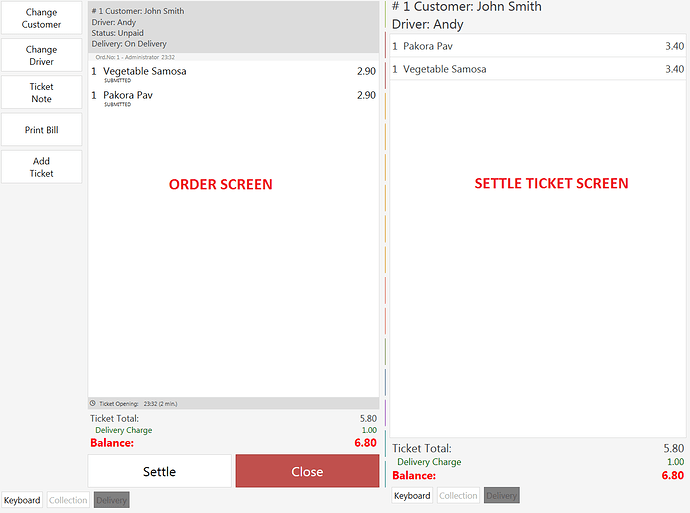 Am I doing something wrong with Calculation Types perhaps? I want the Delivery Charge to be a separate account completely, so I can separate it out in my End of Day takings.

I want the Delivery Charge to be a separate account completely, so I can separate it out in my End of Day takings.

The delivery charge still remains a separate charge and will be displayed correctly as £1 in reports and accounts. The item prices will also remain as shown on the order screen.

The only reason the prices changed from £2.90 to £3.40 on the payment screen is to assist you with splitting tickets - so if you wanted to have one person pay for one of the items, it assists you by equally distributing any charges (like delivery, service charge, tips, etc.) across all items. But these calculated values are never shown anywhere else - not on reports, accounts, receipts - they are only to assist in equal split calculations.