Is there a preset timeout for web.PostJson()?
Would like to maybe try extending the timeout, am having the odd issue with my PMS script at really busy periods.
It triggers my ‘fail post’ validation and think it is a mix of factors possibly internet connection but thinking its slow response from server as they have said they are due to upgrade them due to increased demand suggesting to me a potential for performance issues in the mean time and during busy periods (today being market day) they might be a couple of hundred tickets with allot of products being passed over.

Ok, issue continues, am pretty sure it is a delay in returning a response by the server… single ticket transfers ok and also noticed there is a slight delay on loading the create payment page on the front end of the PMS so am drawing the conclusion there is an issue at there end slowing the creation of payments. Single ticket working ok as only one payment but a larger batch with many payment that delay is propogating into a larger delay causing the PostJson to timeout which if I return the result comes up blank…
@emre I know your busy and dont expect it added if not but if there is an existing way to maybe extend the timeout of this function… it would be handy to keep things smooth in the mean time until they resolve this issue.
I see other similar functions with timeout values online but if I understand correctly web.JsonPost() is a samba specific helper? Does it have this functionality?

Need to find the thread with @pauln where with Emre’s help we hooked a C# class or Net Assembly to create our own “Helper” … The web.X() helpers are just “wrappers” around the same type of thing.

… if we can’t use web.Upload, we might be able to hook a .NET library or C# Type in SambaPOS JScript to do this. That is really what the JScript helpers are, underneath. Basically build your own helper.

… so need to see if one of the methods supports a timeout value.

And this nice picture shows how to reference them … 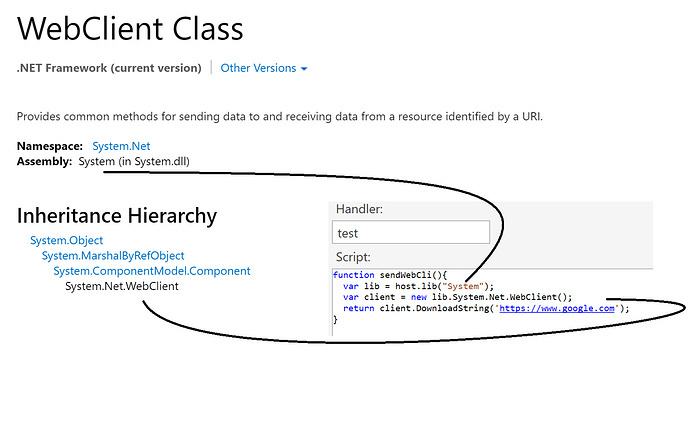