Just go this error and it has your name on it lol. This is at one of my test locations and highly doubt I grabbed any of your data off any tutorials. 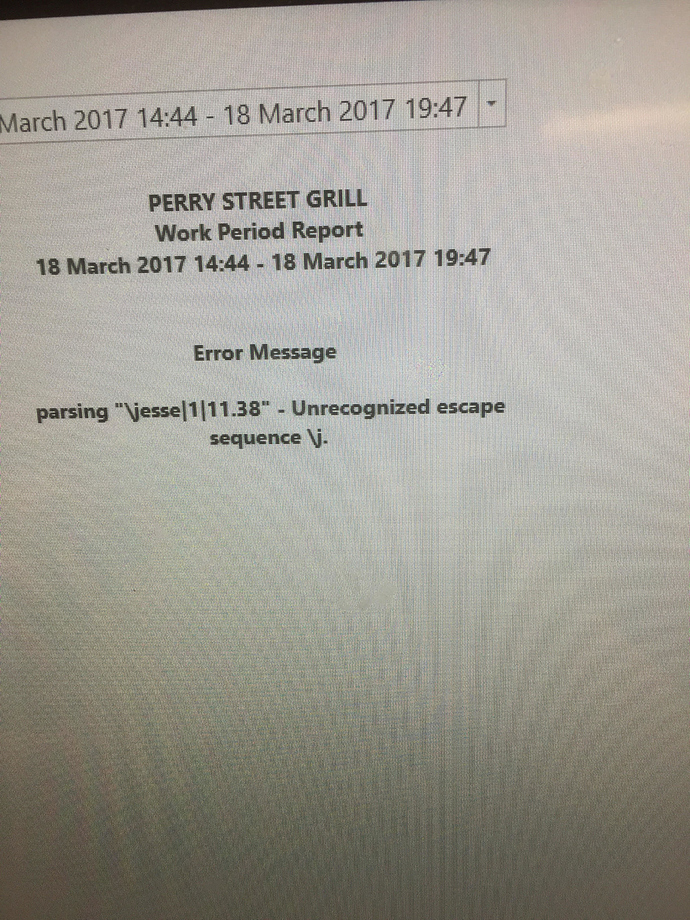 Is it v62? I think emre already fixed that.

LOL hmm strange. Maybe a customer is named that? Did you ever try my config task for time clock? What report is that?

That’s just the default work period report. Its been working fine until today. No I didn’t implement anything besides a basic combo setup that I did on my own.

Going to remote in 20 min I’ll keep the post updated. Maybe they accidentally added some weird characters for the customer name?

Maybe customer names. I’ll check soon as I get in. Nothing that I setup tho

Well the error is simple… it cant parse that character. Looks like might be entity with \ character.

Found the entity Jesse but no weird character in any of its fields. I even tried searching by / character and it won’t find anything. I’m hoping when they end work period it gets fixed

You have a User with \j as the leading characters.

The Workperiod Report does not care about Entities, but it does summary by Users.

I have confirmed there are no users with any characters but letters! Now that they ended work period report its working fine. Ill update them to .62 software version in hopes that it doesn’t happen again.

Do you think this could of been causing the issue? I think I know whats going on.

@emre I think I found a minor non critical bug that you might want to check out. When you insert space character in search field for customer entity screen and hit new customer, it lets you save the customer even though its empty. If you hit new customer first, it wont let you save unless you fill phone number field with something.

On side note can I also require them to completely fill in phone number field and name. Waitresses are developing bad habbits of not inputing full customer information or even missing digits for phone number. It would be awesome if I could prevent them from creating customer with incomplete info.