When I increase the font size, the printer doesnt print full order

Apologies in advance if the question has already been answered, however I am unable to find the one that suits me.
When I print an order out, the font size is too small for the kitchen staff to read. In a busy time they should be able to have a quick glance but instead they would have to spend 3-4 seconds to read the bill as the font is too small. So in the ticket template I changed the

But then instead of the printer printing the item names fully, it prints only a part of it.
For example: -1 Kids Nuggets + Chips
it will print out 1 Kids N in the <J01> format and it will put it in bold.
How can I solve this problem?
I understand that when I change the format it changes the height and not the width. Meaning that the full name will not print. Is there a way to enlarge the font and not sacrifice the full item name.
Thank you
Shah

Hello Shah. We could find a solution if we can see how it prints. Can you shoot a photo of the print and post here?

Hello and thank you Emre for responding. I will post the picture later on today, as I am not in the business premises at the moment. Closed for the night 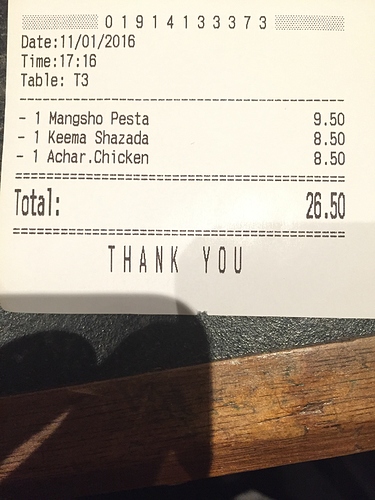 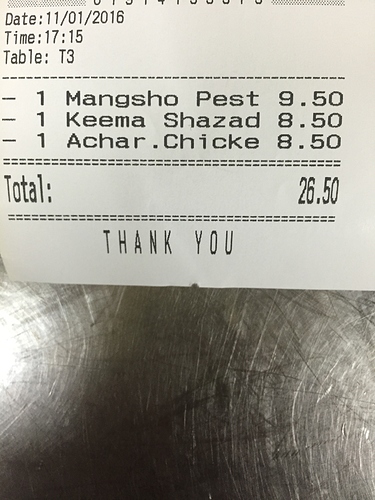 in the first picture is that default format.
in the second picture it is when I increase the size to J01. However here it is not that bad to understand the items. However I have got other items which are abbreviated even more but they are still do not print out fully. for example I have several types of meats for a curry, chicken, lamb, veg etc. i have one curry which is Garlic Chilli …, ending is the type of meat. so in samba i have named the dish Garlic C then i can choose a meat which would be Garlic C Chi Tk. But in the printer it will only print “Garlic” when in the large format. i have tried to shorten the texts in other item except the ones that you can see in the picture.

Also if its for the kitchen, why bother with the price

You could also push portion to the next line.

Or move price to next line in smaller font;

Also looking at your print you have a fair amount of space on the price of the print, try increasing the character count of the printer to fully utilize the width.

Man that print is really not small even on original copy. If they cant read that you might consider installing a big magnifying glass that sits over the area you stick tickets too… haha just kidding with ya.

Thank you @JTRTech, I did not realise that the formatting tags were like that. Just changed it to J10 and it has worked. I shall try the following formats for the kitchen printer.
Thank you once again.