When someone pays, but there is still something else to pay, I need to print the bill with a written ** PAID **

The title is enough clear, I think.

Now I don’t know (and I searched a lot on this forum) how to accomplish this.

When someone pays me after that other people at the same table, friends, have to pay me after, let’s say, an hour. But when I print the bill the products already payed before by their friend are still on the bill as no payed.

I need that on the new printing of the bill there is written ** PAID ** next to the products paid by him before.

And obviously the calculation of the total MINUS the already payed.

You are asking for the ability to pay for specific products on a single bill and mark those products as paid and have it recalculate the remaining products total.

To me it sounds like merging specific products from a ticket into a new ticket for your friend would be the ideal situation. This would leave the old ticket with non merged products in tact for them to pay. And you could track sales more accurately this way.

No no, it’s too complicate. I need something easier. The single products payment method works right. It’s wonderful.

I need just a printing function that write in the new print of bill PAYED to products been payed and recalculate total.

It should be easier for programmers of Samba and it will be a great function for everybody.

You are asking them to change something that was designed the way it is for a specific purpose. If they change this design to make it fit the way you want it to behave because you feel its too complicated to try and set it up with the rules/actions and other tools provided. it might break other things for people using Samba now. If we ask for custom hard coded features constantly then the features that need to be worked on would get neglected.

I don’t know it might be something @emre can do but it might not. If your not interested in attempting to use rules/actions/commands etc to do what you need It really sounds like you need an open source solution. SambaPOS3 might suit your needs better since it is fully open source.

Or you can try to figure out a way to design what you want to do with the tools provided by SambaPOS instead of requesting it to be hard coded. Lots of people me included would be willing to help you figure out a way.

EDIT: I was thinking another approach you could maybe do… is use order display states triggered on a payment processed for partial payments… but getting it to tag specific orders would be tricky… not sure its possible. You would need something that can pay for selected orders only on the Order Line display screen.

Ok I have a solution for you… 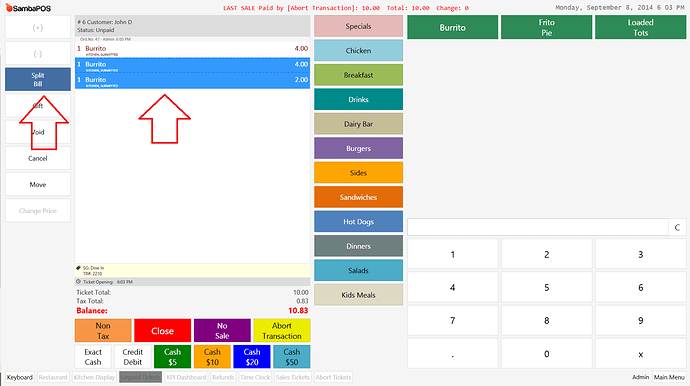 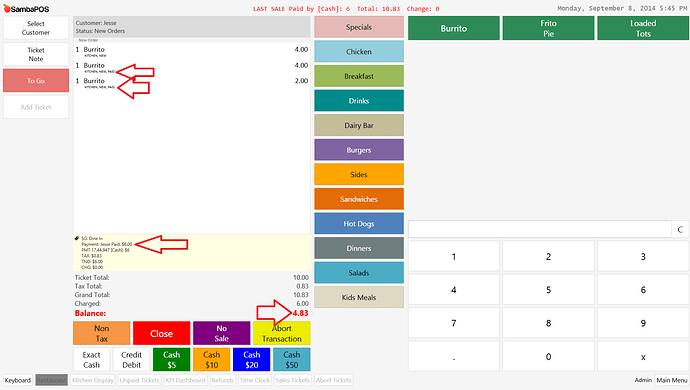 Here is how I did this: 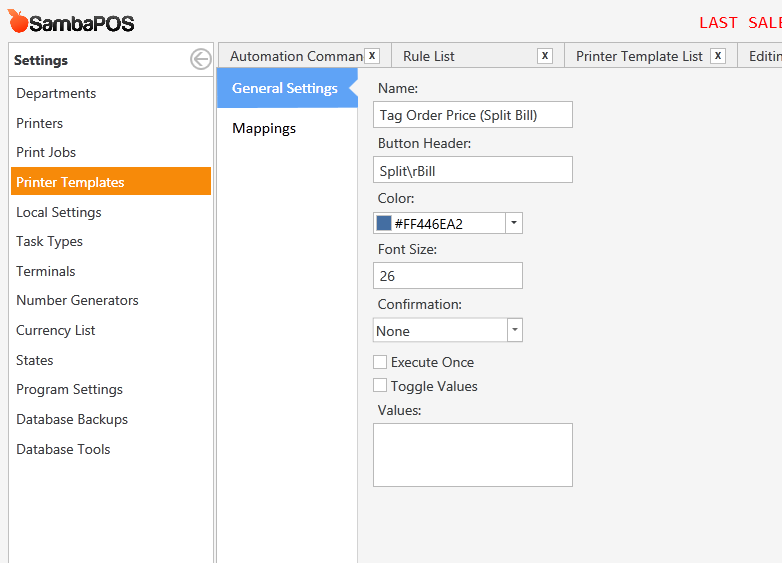 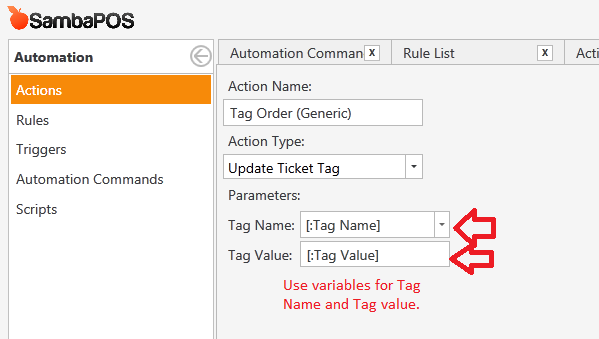 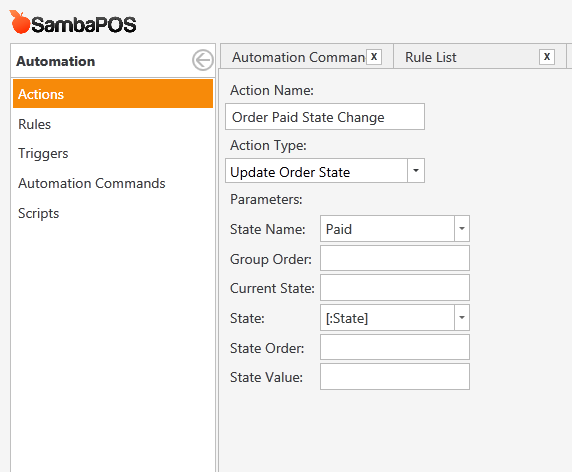 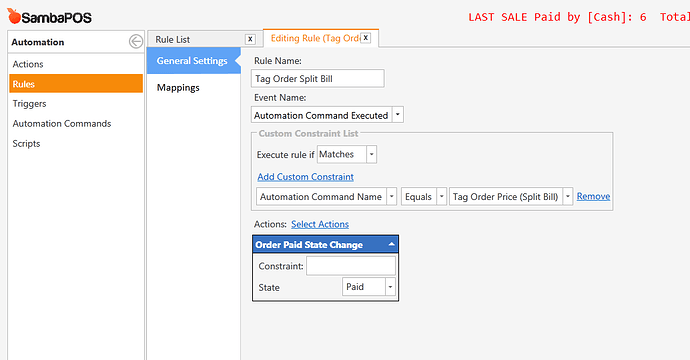 Create Rule for the Ticket Tag: 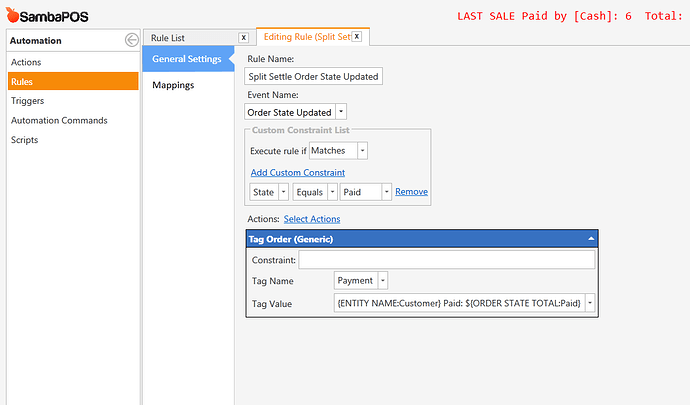 Please don’t say that is too complicated hahaha

@kendash, I appreciate. Really. But it’s too complicated and not too clearly for my employees(that are stupid like an horse). I need something easier. From the payment screen, when I click a product and after I click “All” > “Cash” and then Close, when I reopen (after lets say 30 minutes) I view in the payment screen what I want to see on the new printing bill.

I THINK IT’S NO TOO DIFFICULT TO ACHIEVE FOR PROGRAMMERS OF SAMBA because it’s the same of the paymente screen but on the print.

And when I print the products already payed need to have “PAYED” instead of price and the total of bill the new total of bill.

I think I can make it behave like your requesting I will look into combining the function into payment.

@emre I think it would be possible to tie this into the Payment Processed rule so it tags order state to Paid on orders if you can read the value of the orders selected from payment screen./

Order selection in Payment Screen might not work totally synchronized with orders in tickets. I’ve implemented that part for a specific scenario something like 10 people eats on a single table and they all walks next to till and say what they ate one by one. That happens frequently in our country especially on venues close to schools or universities.

There is already an easy solution called ticket splitting. You can move customer’s orders to a new ticket and simple settle that. Since original ticket won’t contain these items you won’t need to print “paid” next to them. Implementing you request is more complex than it seems. Think of a situation a ticket contains 3 coke on a single order line and only 1 of them paid.

I tryed the @Jesse solution. It’s not good enough. Because my employees are too stupid and they can make an accident. If the peolpe ask me the total bill of the table I print it and I have to say by voice or with a pen I have to write on the bill the items already payed. It’s too complicated. Not as Samba.

@emre I say: If there are 3 bottles on a single order line you can split the single line to two lines. And next to the one payed you can write “PAYED”. I think it’s not too complicated. Why you say it’s complicated? It’s just math.

Why you say it’s complicated?

I said complicated because you said…

Because my employees are too stupid and they can make an accident.

You can do it in the payment screen or not?

@emre I say: If there are 3 bottles on a single order line you can split the single line to two lines. And next to the one payed you can write “PAYED”. I think it’s not too complicated. Why you say it’s complicated? It’s just math.

@ginoli. I’ve tried to explain in my previous post. We don’t have a feature for splitting or updating orders that works synced with payment screen operations. I’ll note that and if it is a common need for venues we can consider implementing that.

@Jesse: with your suggestion I can print just what they payed to me and what they have to pay and all together with “PAID” written on the side in place of the price and the total modified based on what they paid for?

Will not be able to replace price. You can tag just the specific orders and yes have it print just what’s paid and what is left to pay.

The screenshot showed how it would look.

EDIT: I am not sure just how “Horse Dumb” proof it is… but it seems like a fairly simple process to train someone to do.

Basically if you look at the screenshots I provided you would select the orders your first customer is paying for. Press the Split Bill button on the left (You can put the button where you want) it will mark those orders as paid and assign the entity name as Name Paid: x.xx in my screenshot it says Jesse Paid: $6.00 Then you simply settle for 6.00 the remaining balance is what your friend will pay when he comes back later. You can assign a print bill action and insert it in there to print when your friend pays his 6.00 portion if you want a receipt for both customers. Just remember that it will show the entire ticket even your friends portion because you are not actually splitting the ticket.

But the totals will be updated when your first customer pays.

Dear @kendash, i’m waiting for a definitive solution that @emre promised me. And now i’m trying to use your solution. But, there are many but:

1 - How you can see my balance does not update itself when I click on “Split Bill.”

2 - I need to print the bill with the information that I asked you (“payed” instead of the price) and with the running total of how much remains to be paid. What to do?

3 - You can make it clear that this single product has been paid not only with “payed” under the name of the product? Maybe a different color?

Obsviously I’m not speaking about “Payment/Settle screen” which remains the same until modification by @emre.

And for the Balance and the print?