Why is Navigate Action Failing

I cannot explain why for 1 particular Customer (so far) we cannot Navigate to his Account by using Parameters. Below is the setup and failing to find the individual account:

You can see the “popup” dialogue to show that I have the correct Parameter.
Also if I used the “Account Details” button it obviously works as that button must be based on AccountID No.

What can you suggest? This action so far works for most Customers but I am a bit concerns that on Day 1 - LIVE it has failed…

(EDITED: Changed to question thanks for everyone’s input.)

What Rule/Event is that inside? [:EntityID] does not look right to me… I would expect it to be [:EntityId] (if that even exists).

Are you absolutely certain that the supplied Account Name exists?

How are you deriving the Account Name from the Entity Id in the first place?

The Navigate Module Action when used with the Accounts module only accepts the Account Name as a Parameter, AFAIK, so you cannot use an Id there.

What Rule/Event is that inside? [:EntityID] does not look right to me…

Sorry Q - that var is created by me here:

Are you absolutely certain that the supplied Account Name exists?

Your other commands: definitely passing Name - I think could confuse you due to I am passing my own parameter named “EntityID”. Could this e the issue in Emre’s code…

Ok, but what Event is that Rule using?

And what Widget is that?

I just don’t recognize [:EntityID] as a usable parameter to any Rule.

What happens when you put a Show Message Action in that Rule? Does EntityID have a value?

Are you using some hidden feature I am unaware of?

And what Widget is that? 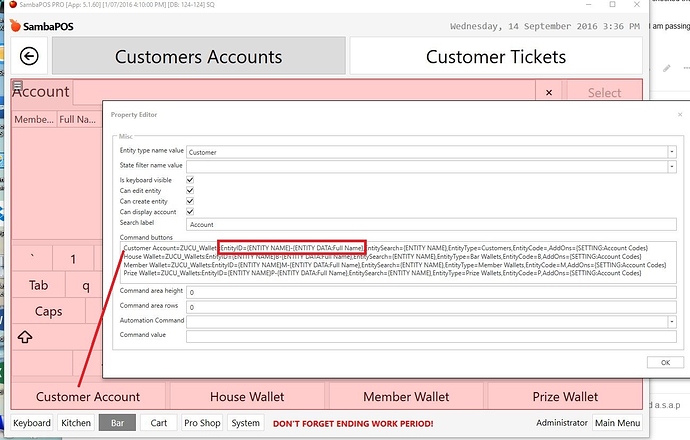 What happens when you put a Show Message Action in that Rule? Does EntityID have a value? 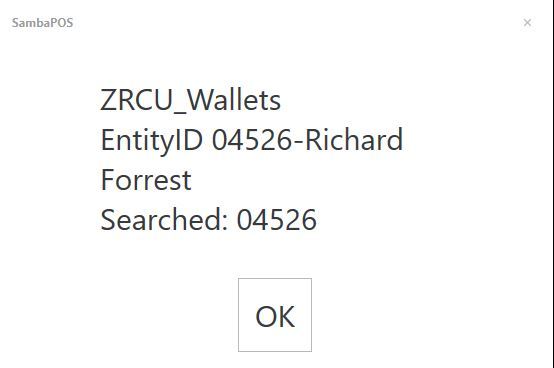 Ok, but what Event is that Rule using?

The Rule ZUCU_Wallet is shown as the 1st image in the 1st post - this is called by the “Customer Account” button which creates and passes the variables as the “Delivery Tutorial” by Emre.

I do think I have it all correct?

The answer is in the 1st image!!
Can you see it Q…

The image only shows the Actions, not the Rule, not the Event.

Youve got RichardForrest but the POS screen shows Rick Forrest

Saw that, but RickH beat me to it.

Please @pauln, tell me what EVENT that Rule is using?

It must be Automation Command Executed Event? If so, I don’t understand how [:EntityID] becomes a usable value… [:CommandValue] would be correct.

Correct - well with the later Revisions 5.1.56+ the " Delivery Tutorial" shows we can pass multiple variables by the use of:
variable=value.

To be able to implement something useful we need to know which tickets are selected and which deliverer button is clicked. We’ll use V5’s command parameter feature for that.

So when we examine first line command button syntax becomes…

Parameters appended to command name with : delimitier and they formatted as <key>=<value>. For example >>> Header=Command:Param1=Value1,Param2=Value2

Edit Ticket Lister settings and update it as follows. Enable Multi Selection and Loop Commandssettings too.

Wow, that is cool. Never read that Tutorial, so was never aware of that feature in the Rule.

@RickH good to see you!

AND yes take a snapshot and frame that! A very rare occasion indeed…

Actually can’t wait!
Was going to ask how it has been going as truly you were a great pioneer there and we got some good functionality from @Emre from your work…

Its nothing compared to your multiple accounts setup