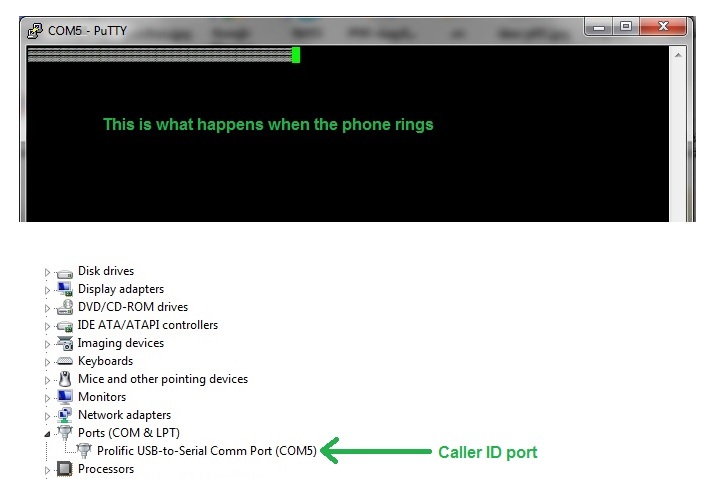 I bought CTI comet caller ID and I tried to test it using Putty but the phone number did not show up when phone rings but it showed some white lines as shown in the screenshot.

The caller ID is connected to my PC via USB to COM Adapter because my PC doesn’t have physical COM ports and this adapter driver is installed well please see the screenshot. Therefore the caller ID should send data on a virtual COM5 Port of my PC.

The caller ID is supported by the phone line and I tested this by using a phone with display and it showed the phone number. I do not know why Putty shows white line instead of the caller number? Please help me what to do to make putty to show the the phone number when it rings. Thank you

Have you read the caller ID tutorial? It mentions some models need configuring/initiating.

On a side note I helpd set something up for someone a while back which was for call logging, one software output CDR data on one com power which had to then have a serial cable looped back in to another com port on to which a 2nd software read the output from the fist software and one thing they were very specific on was that some USB->COM port converters can be a nightmare and they wouldnt offer support is one was used so have to buy a dual com PCI card.
Not saying thats your problem, just reading your post it sounds like the caller ID device is a com port device and you have a seperate usb adapter so thought I would mention it.

the caller ID device is a com port device

Hi JTRTech . Thank you for the reply 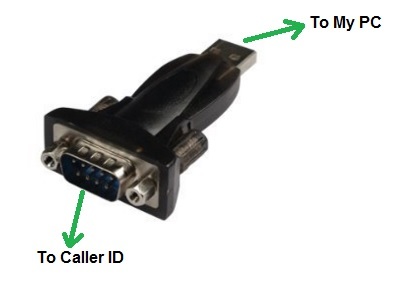 yes I read the caller ID tutorial but I didn’t notice that I have to configure a some models. Can you please pass me the tutorial, I might have read different one.
Yes the caller ID device is a COM port device I can’t install dual com PCI because I am using laptop please see the photo my the adapter which I am using. I am not sure the USB to COM adapter is casing the problem because I tested this adapter in another PC (PC2) which have EPOS and EPOS can show the phone number but when I used putty on this PC (PC2) it still shows the white line. I really don’t know what is causing this, Please help.

PC (PC2) which have EPOS and EPOS can show the phone number but when I used putty on this PC (PC2) it still shows the white line. I really don’t know what is causing this, Please help.

So this adapter works on another machine?

So this adapter works on another machine?

So samba can get the number but not putty?

isnt the aim for samba to get the number?

the EPOS in PC2 is not samba. I am planing to buy samba , I am just testing my caller ID via putty to see if putty can show the number but it didn’t.

Then just download samba and test it. Sambapos v5 has free trial.

Why wouldnt you LOL