I have a windows server 2012r2 setup with mutiple users using terminal services.

No problems accessing database but I am trying to setup 2 terminals that have 2 cash drawers attached with epson network printers,

I have setup multiple print jobs no problem and mapped to the terminal names as needed.

My problem is that the terminal server name is not saving in the individual user accounts.

I change it on one and go reload the other and its changed over,

Assume this is an issue as its on the same machine with multiple users setup rather than 2 physical machines, ,

Any help would be appretiated on this.

I have read many setup guides on setting up multiples but none seem to cover the terminal name,

I need the terminal name to then use the mapping to the correct printer and drawer.

I am making the assumption that it is possible to share the database across 2 or more terminals and they would use the same working period,

I have done single sessions easily enough and also mutiple computers but I cheated and set each local printer to teh same name so didnt have to worry about seperate print jobs, Now I have done it correctly or so I thought Its bitten me lol

Terminals are set in ‘Local Settings’:

After that login to the actual rdp terminal and start sambapos it should have the terminal name set correctly.

Yes that is correct however he is using RDP services and if you do not set the terminal name for each user created to login to each session then it will not save it. This must be done while logged into the server locally and not while during an RDP session and it needs to be done for each user for each RDP terminal he plans to use.

Oof, that sounds like a pain in the tuchus. Is there a command-line switch to specify terminal?

I think I may have done it now,

The terminal names seem to be holding on restart,

I did originally set them from the root on the server but maybe didnt shut down the Server terminal first,

Thanks again for the quick replies

I thought I had got it saved but appears not.

It only remembers it until you restart then it will pick up the terminal name that was last saved.

I have 3 in total , Cafe , Reception and Server.

I logged in locally and even set admin rights to the users to make sure they had priv.

Started at Cafe and set that term name, exited and logged out, same for the others in order and when I opened the RDP to cafe it was set as server as it was the last one saved.

You mentioned there still is a local settings file that should hold the terminal name in each user dir I assume, what and where is it so I can check the write priv, Maybe something to do with that.

Just for info this is not a hack win 10 its a server 2012r2 genuine install, It does have a dc running so not just normal win user accounts they are domain accounts for the rds.

I found a settings in each app data folder but it appears to be a v4 file and holds no specific details, Still looking for more.

I had another thought that maybe default terminal should be enabled on each user specifically but that does not work either nor removing default completley,

Back to finding the settings file and maybe have to alter the icon “Start In” to reflect each per user.

A little stuck now and cant seem to find anyone else in the forum who has had this issue, This is the closest but I cant find a sambasettings file anywhere, I installed a new version on another pc and still none. (RDP) Terminals keep changing their terminal name

sorry to be a pain and bumping the topic but this client wants to buy his licence and Its not good as it is.

I have searched high and low for the settings file but assume it must me a dll now rather than a config file or something.

I cant find anywhere that stores the terminal name so cant copy it to the local user.

Logged on as individual accounts as reccomended and that still does not work as I assume its looking in the same place for each user which will be in the root users settings.

Every terminal starts up with whatever was saved last from which ever terminal you use.

Is anyone using more than 1 rdp session and have this working correctly or is it a bug in the V5.

It’s not a bug and windows controls that not Sambapos.

Are you paying for each rdp session license on the Microsoft rdp server? And you have each client CAL setup with the license server? Windows server does not automatically support multi terminal rdp. You have to purchase and maintain licenses for each client and it can get expensive.

It’s currently $199 for each terminal device or user.

Thanks for the reply,

Yes terminal licensing is running and the per user cals are installed.

I have a lab 2008r2 server that I am going to try and get to this afternoon to try it on that as well, It will be running on the timed expiry of ts but should not matter.

I would have thought I would seen something in either the local docs or appdata of the local user to distinguish each user and their profiles but they are pretty empty.

I will also try a Win 10 later with single users login/multiple account as tsl is really only allowing concurrent multiple sessions.

Each reload of Samba just seems to be grabbing a single profile user profile setting regardless of which user (terminal) is logging in.

When you change the terminal name in local settings it will hold it unltil the next reboot of Samba where again it will change to which ever terminal name was saved last from any of the sessions.

All the user sessions are grabbing/saving the local info from/to the same place where ever that may be. Its as if each user is missing a local profile/settings so grabbing a main one.

I thought settings.txt was in the hidden ProgramData folder.

So the settings are stored here

This is not specific to a user session so multiple users are going to all use this location hence when you change it on one user it changes for all.

This shows in default app location in local settings on samba, The default user location is as I thought appdata,. 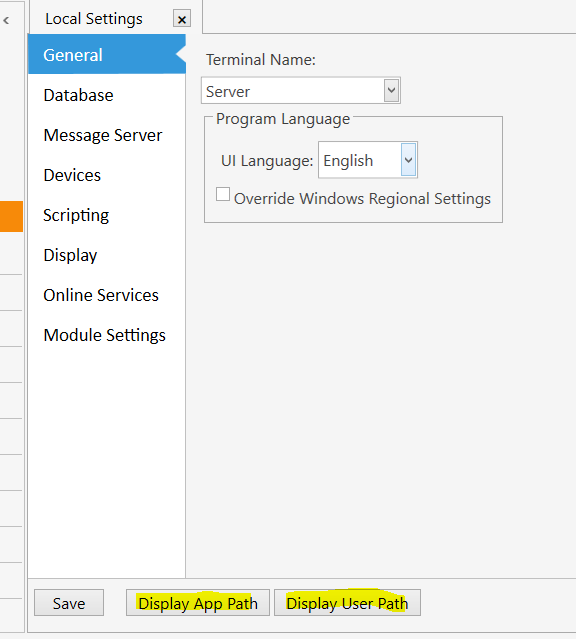 while all sessions are sharing this one file it is impossible to be able to set up multiple remote desktop sessions or even users,

when you update the terminal name for one it is going to save to that file and the other will load it,

there is a folder in the settings called terminal files but its empty,.

I cant see a way to change the default app location for each user.

So it appears my last question does still stand. Is this a limitation of the software now.

Is there a way to specify the unique settings file for each user so that they can be accessed independantly so you can store the terminal name.

I will continue digging around to see if I find anything but wanted to update you,

Thanks again for any help

So I should have read the post better that I linked earlier.

I missed the programdata and assumed programfiles

I have just copied the settings from program data into the roaming folder of each user on my Win 10 setup and hey presto, The terminal names are now staying independant.

I will put this into practice now on the server setup and see what happens. I assume the same lol

Ok I can confirm I have solved this issue.

Just so if anyone else who needs it then its clear here is the solution.

If you are using multiple user sessions or remote desktop sessions then you will have to create a settings file for each user.

This comes with a warning,. Anything in the local settings within Manage-Samba will have to be replicated for each user if you want to change or add anything so I would suggest initially that you setup everything you want and then sort out the settings files.

By default Samba uses a settings file located in C:\ProgramData\SambaPOS\SambaPOS5 for all users.

So if you make a change on any of the users local settings it will write to this file only.

If you want to use multiple users as I did on the same machine then you will have to copy that settings file into each users appdata location. This will be C:\Users[EACH USER]\AppData\Roaming\SambaPOS\SambaPOS5

Once you have copied it restart each samba instance for the user and you can now have different settings for each user.

In my case only the terminal name needed to be independant so that each RDP session loaded the correct terminal and in turn the correct printer for receipts etc.

Again if you need to change anything in local settings i,e the database string then you will now have to login to each user and change it on every one the same as if you were using seperate computers.

This in no way will bypass anything to do with terminal licensing of windows this is purley to enable each user of the same physical machine to have seperate settings,

I hope that this will help someone else out in the future.

I thought settings.txt was in the hidden ProgramData folder.

Ahhh as an addition you are correct, I always work with show all file types so I forgot to mention that.

You will have to have show hidden folders selected in file view to be able to see this folder on your machine,

That folder isn’t user specific though is it i dont think?

No its not which is the problem but copying the settings file from there into the appdata folder makes samba use the appdata for settings.

I assume that the program is set to check appdata first for settings file,. If it exists use it and then if not default to programdata settings file,.