Coca Cola has offered me to do a promotion for one of the beers that they sell, KAISER.
So the deal is that 1 beer will cost R$4, and 3 beers will cost R$10.

I have at least 3 different approachs to do this,

So here is the thing… I NEED HELP!!! LOL… help from the geniuses around here…

Come on, lets start the brainstorm!!!

EDIT: First IDEA. Save a Ticket TAG with KAISER BEER QTY, and when it gets to 3 or x then change the price… the problem here is “changing price” action…

OK!!! did not know that we had order counts… how?

{ORDER COUNT} is available. I helped someone program order tags so that when he chose first 6 it charged a fixed price… every addon after 6 was .50 extra… and then it subtracted just the .50 for each one took off up to the original 6.

So I can see how you could probably use something similar just on orders added instead of order tags.

That example of the 6 would help me a lot, do you remember what post it was?

It was a private conversation during a team viewer assist I did for someone. In a bit I can try to reproduce it and give you idea of what we did.

I would really appreciate it!!!

I think this might work. Ignore the rule name i was just cloning for simplicity.

But, I think that order count count total orders in one ticket… I need the order count of a specific item… 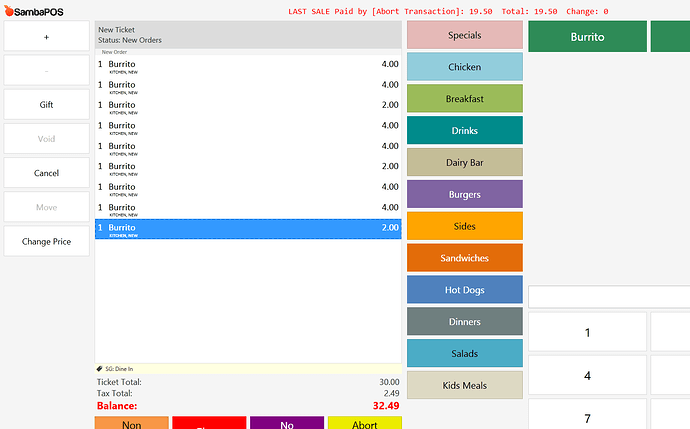 Every third burrito it changes it to 2.00 automatically.

It could be configured to calculate price differently too.

If that looks like it might work I will share what I did. So far I cannot get it to set price based on numberpad input yet. I an working on that.

EDIT: Got that to work 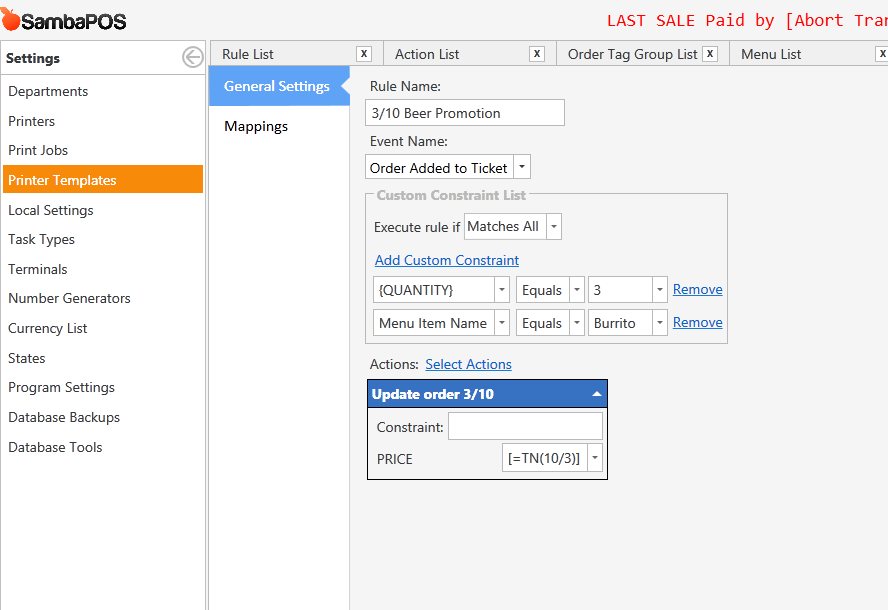 that could work too. I think the above rule would be the most efficient though as it evenly separates the prices for each item instead of taking 1 big markdown. You could probably do a mix of both styles to eliminate user error on entering the order

Dear @Jesse, did youtry your way with different items in the middle?

I prefer the 2nd method I showed you. Its a more natural way to do it. You select 3 and press beer menu item and it adds 3@10

Yes I had it set for ONLY specific item so I could insert other orders… I just personally do not like taking a large markdown on third item… I would rather it be more natural and spread out as a whole like my 2nd option.

@emre I tried using {TICKET QUANTITY SUM:X:NEW} it worked for first 3 but not the rest added. {QUANTITY} worked everytime I selected 3.

Maybe it was my constraint I will look further.

OK… {TICKET QUANTITY SUM:KASER 600ml} works great for me, in this case… now i have to find out a way to change the price to each 3rd beer the client buys.

I thought that a good idea would be check if {TICKET QUANTITY SUM:KASER 600ml} was a multiple of 3…

Is your promotion for 3 of the same beer or can they mix brands and still get the 3rd one reduced?