@Jesse as someone very familiar with accounts and samba accounts system I was hoping you might confirm I have setup my gift voucher accounts right.

I was following a tutorial of QMcKays which was for V4 but seemed overkill for basic credit based gift vouchers and wasnt sure is some of the complexity was required only for ‘work arounds’ in V4 and thought it would be a good excersize to try and implement my own setup from scratch.

I have voucher account types with voucher entities created with a random 8 prefixed with 87 to use with numberpad/scanner.

So I have voucher ‘topups’ setup as a debit from payment accounts into a credit on the voucher account.
Screenshot after a payment of £10 cash

I then have a gift voucher transaction with a debit from voucher to a receivables credit which cancels against the sales/receivables transaction.
Screenshot after £3.20 sale charged to account.

I think this works out correctly in treating the voucher accounts as a suspense/credit ledger…
Hopefully you are able to confirm that I am understanding this correctly.

Looks good to me. Your on the right track.

was getting worries as the tutorial I started following made it look so much more complex.
Now to sort the reports side

@kendash am still a little confused about the field definitions on transaction documents and hoping you could enlighten me. 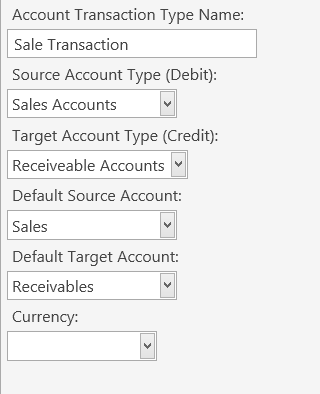 What am I missing…

Just some light reading before kendash comes back.

Crediting and debiting accounts in sambapos - not same as official accounting? V4 Question

I’m starting to understand the accounting system a bit now. It’s actually not that different from classical accounting. Only the way it is operated in SambaPOS is a bit different. Accounts Credit and debit accounts are technically the same thing in SambaPOS. If you want a credit account, you make sure it always has a negative balance. If you want a debit account, you make sure it always has a positive balance. So, accounts with a balance between brackets are credit accounts and the other ac…

I had the same issue getting it right in my head too!

Its taking the money from the source which is Debit and moving it via Credit to Receivables. The Credit portion of Sales in accounting is handled with the Ticket Document not an accounting transaction document maybe thats what is confusing you?

Think if accounting as simply moving money around. THe sale will always go to Credit… you make a sale so it credits sales…then you use automation via account transactions and a document to move money between accounts.

All your doing is moving money into and out of various accounts. You want to make sure its moving in the correct flow so balances are accurate.

Think if accounting as simply moving money around. THe sale will always go to Credit… you make a sale so it credits sales…then you use automation via account transactions and a document to move money between accounts.

I get that but the Sale Transaction shows Sales as the source/debit and receivables as the credit account, the field names seem back to front and the actual transactions do the reverse…

Ok let me try to explain better. WHen you make a sale… you credit the Sales Account… You then need to move money from Sales so your source will be Debit (Its moving out) and IN to receivables(Credit. Sales will always be a negative the sale has nothing to do with cash… its a value of a product.

SO you credited sales 3.20 you then moved that to Receivables so Sales is now a negative because you moved it.

Try not to think of it like a check book its not like that. Accounting is simply moving money around in accounts.

You ever hear of someone cooking the books? Its because they hide money by moving it around constantly or they create bogus accounts to move the money into. Things like maintenance fees when it should really be something else.

This is exactly what I was about to say, a credit is then not a credit like you paying money into the bank but the inverse.
Its a perspective of the credit/debit.
You DEBIT the customer of there money

and the flow continues from that?

To be honest check book works the same but 99% of people have no idea of the correct terminology thats why I said do not think of it like a check book.

Ok that explains the account screen which actually wasnt the problem

The sale transaction is not what puts the money into Credit part of Sales.

The sale transaction is not what puts the money into Credit part of Sales.

OK then when does sale transaction ‘fire’ then?

Its to record the accurate movement of money when a sale transaction happens.

OK then when does sale transaction ‘fire’ then?

your wanting to know what is telling it to put it into the Credit Portion of Sales?

Its to record the accurate movement of money when a sale transaction happens.

So on that basis payment transaction doesnt process the payment either then with debit receivables to credit payment but account acreen again reflects the inverse.

your wanting to know what is telling it to put it into the Credit Portion of Sales?

Am just trying to better understand, your telling me if I switched the source and target accounts in the sale transaction document a sale wouldnt change flow on the account screen???