Personally if it doesn’t happen too often I would just add a Coke at regular price then use modify price to change it to 8.00. I would use ticket logs to track use of button.

Another issue I found is it will print the whole order again, of course with the new order tag added, not sure if there is any way just to print the newly added order tag?

Cant see a way to print a tag without an order… if you make sure its clear its a reprint the kitchen should clearly see that an edit has been made.
If not maybe a ticket note automatically added as part of the rule;

Personally if it doesn’t happen too often

Yeah I also would think so, and thought same when the first client asked, but today I have the third client ask about same thing and apparently it is causing him “lots of hassle” the way it currently is!

Do we not have a ‘Clone Order’ action?
Create ticket has clone orders option.

maybe if we had a clone order action we could automate a flow with clone order?
With some extended flow we could clone an order to be ‘new’ voiding the old one giving us a truly unsubmitted order. maybe with an additional state to prevent cancel…

Do we not have a ‘Clone Order’ action?

Yeah I tried that already, it only works for the whole ticket and creates a new ticket.

thats a option but , I don’t think this is ideal , what about user restricts? waiters can change all of the items easily ? in that case we dont even need triggered time based price simply change manually , we need some sort of alternative .

Right now I’m thinking about your idea of reprinting, however I don’t know if it’s necessary to reprint the whole ticket again each time (imagine if ticket contained many orders).

A couple thoughts I have: 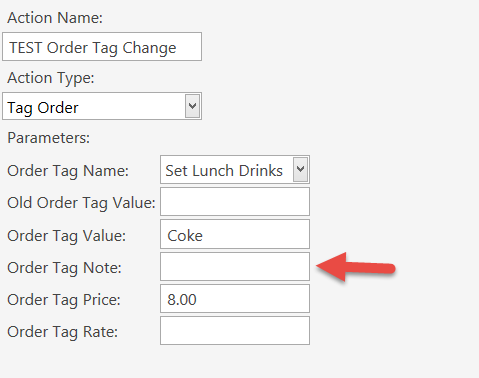 I can’t see any Order Tag Note on the Order Tags editor:

Right now I’m thinking about your idea of reprinting, however I don’t know if it’s necessary to reprint the whole ticket again each time (imagine if ticket contained many orders).

I was just thinking that when it comes to tickets still being prepped rather than have 2 tickets on the pass they just swap the old one for the new one which emphasizes the ‘NEW’ / ‘EDDITED’ orders.

What does this do: Order Tag Note ? Maybe it could be used somehow to flag those order tags that need to be reprinted, then along with a separate printer template could possibly just print those order tags flagged for reprinting?

I can’t see any Order Tag Note on the Order Tags editor:

Its not DESCRIPTION is it?

EDIT - No it isnt LOL Although saying that help shows {ORDER TAG NOTE:x} not sure what we should put for x on this…

Nope, it is separate from description.

I added description as “description” and note as “note”. This is how it is displayed on screen:

So Order Tag Note might be an internal value we could utilise ?

@emre any issue about using this?

Ok so Order Tag Note works and on my reprint I can set the printer template like this:

Or even if I want, I can create a new printer template just for these new ones:

However it is problematic because I can’t remove the Order Tag Note afterwards, so in a scenario where a Coke was added then submitted, then subsequently another drink was added again later using the same method, any time that order prints again it will show all those added in this way with ** New **.

What were you planning to use it for?
If you update it as part of the action to add the tag to submitted order.
Update it to Addedor something and Mars order with ** EDITED ** will reprint the edited order and show the new tag

Could you do maybe select all orders, update tag with constraint of ORDER TAG NOTE == ** NEW **
And update note to blank?

And update note to blank

Can’t see any way to set Order Tag Note to blank, because only can see it on the Tag Order action, for which I need to specify parameters.

Ummmm, maybe a need for an update order tag action?!

You can’t only do [:Note] on the action so it applies to all orders? But guess as its tag it only applies to new tags as a tag action rather than update…

Personally if it doesn’t happen too often I would just add a Coke at regular price then use modify price to change it to 8.00. I would use ticket logs to track use of button.

This is the most appropriate solution when it relates with missing drinks.

PS: Execute Update Order action with Locked parameter set to False. That will enable order tag selection but I should say there is a reason for locking order tags

I am trying to do this too, my use case is a bit different:
When I serve coffee I have 2 prices:
Coffe (single cup)
Coffe (Refill upto 4 cups)
Right now we don´t ask which one they want, we serve the first cup and when the customer asks for the second we change the price and put a bar on our ticket to control each time they refill.
I was thinking on using the order tags to change the price and count the number of refill by clicking on the refill order tag
Is there any way I can do this?

How can I do that? How can I change the state??

If you need to ask how then you probably need to read up on states… DO NOT dive in head first as if you end up changing the default status state flow youll cause allot of issues.