I’ve been reviewing SambaPOS and some other open source alternatives. I have an upcoming project for an Amusement Park. I would have fast food sales, but no tables. I would also have general ticket sales, perhaps a day pass, season pass, coupons, gift cards, etc. There’s a gift shop with products that would be scanned and sold.

Down the road, but not as part of the initial project, I may even need to introduce scanners at rides, where say a customer could load balance upon entry, and then scan a card, or some barcoded media at the ride that would deduct from a current balance. I had though of using it like a gift card system.

Just looking for opinions if SambaPOS would be up to the task. I know it can be deeply customized, but would I be pushing the envelope?

I have one alternative solution, but in my opinion it’s very “ugly” even though somewhat feature rich. I love SambaPOS for it’s beautiful interface.

All of that can be done and there are great tutorials on most of it. I recommend version 5 the $99 one time fee is nothing and you get a lot more features including powerful reporting and scripting ability.

Most of what you asked has been done although it’s not been for an amusement park the systems explained are similar to what I’ve seen done in these forums. Take some time and browse the v5 tutorials section.

Awesome. That’s great to hear… that gives me confidence that I wouldn’t be wasting my time trying to make it do something it wasn’t designed for. I’ll definitely give it a shot.

I’ve been browsing and reading for weeks so I have some ideas.

I may even need to introduce scanners at rides, where say a customer could load balance upon entry, and then scan a card, or some barcoded media at the ride that would deduct from a current balance. I had though of using it like a gift card system.

We setup something similar to this for a client who had a amusement centre/kids play area. They would get “tokens” which would be printed similar as gift certificates - a receipt with a barcode linked to an entity. In their case, either you could purchase tokens or you could get some for free if you purchased a certain amount of food/drink. So in your case, this would work perfectly as the token vouchers we produced were linked to entity and account, so they had a stored value. You could scan at the ride then either cancel it or take an amount off the account balance.

That sounds pretty similar to what I would want to do. So in this case an entity is a customer. Do you take customer information in this case when you make the customer an entity? It seems like you would accumulate a lot of customers, some of which may never return. Or would they expire after an amount of time or a zero balance?

Right now I’m trying to decide how to deal with entities for a simple window with fast food sales. There are no tables, so I’m not sure if I should make an entity for the employee, the location, or something else. I know that’s a basic question that I can answer by reading more topics in this forum.

I also need to customize a screen for a gift shop and ticket sales that have nothing to do with tables or food sales. I’m still reading and learning at this point.

Thank you for the insight! I’m remember this post later when I start setting something like that up.

Do you take customer information in this case when you make the customer an entity?

They wouldnt expire on their own unless you setup something to do so but entities themselves ones used cannot be ‘removed’ completly as they will be linked to tickets/sales.
As for information, the fields on an entity are customisable, the ‘name’ field doesnt have to be name it could be ticket number or whatever.

There are no tables, so I’m not sure if I should make an entity for the employee, the location, or something else

For pure over the counter sales generally you wouldnt need an entity… Change the ticket creation mode to create ticket rather than select entity and you can do sale without entity selection first.

Thanks. Can you still have employee logins if you do that?

Yer, the login screen is still the same its just what happens when entering POS (or logging in if you dont have menu access which takes you straight to POS).
Default is select entity, changing it to create ticket and youll see its what your trying to do for pure over counter sales…

Okay, I’ll do some more reading before I ask too many more dumb questions. Thank you!

Is everything the same with the license costs? Do we still have the $99 special going on?

You have to buy through a reseller now so it’s up to them what they charge. I think the $99 has ended and the resellers sell for around $249 I think, although I could be wrong on the price

249usd or equivalent is the RRP set by Samba.
I have licence only for self setup/admin available on my EPOS site for 179gbp at https://sambapos.tricerolph.com/product/sambapos-v5-licence/ if you can’t get hold of a local reseller.

Clearly it’s worth it. The $99 startup fee always seemed like a wow factor when we would talk to local business here. I always in the end got turned down for the lack of card integration but it looks like that’s coming soon.

If our company is going to be selling and setting this up for others in our area, it may make sense to sign up as a reseller. I’m not sure what advantages that will bring. I’ve spend the past year, learning, tweaking and playing around with the software, but I have yet to implement one completely. So there’s that.

I do have one big project coming up this fall, where I’ll certainly get more exposure.

There arent any major be all or end all advantages to being a re-seller other than directly buying licences for customer at the re-seller price which also went up with the 249 RRP increase so you would save a little there but nothing thats going to break the bank.
You used to have to purchase 10 licences/$1000 as part of being made a reseller but thats when they were still $99. Not sure if this is still the case.
Other than that you get listed on samba site and may get the odd referral from them depending on your location and other resllers in your country

That went up as well. 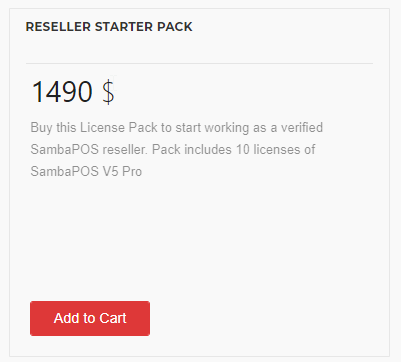 Personally I think its a good thing. I see too many people that are resellers but are clueless. Get a commitment from them first.

Personally I think its a good thing. I see too many people that are resellers but are clueless. Get a commitment from them first.

Dam right, and good because your not paying to be a reseller, just committing to buying 10 licences.

I’m semi-clueless but learning. I’ll probably learn as I go on my first big project, but by then I may only be marginally clueless.

It’s a slow process and learning on the job is good so long as you don’t over commit and promise things you can’t deliver.
I did several basic setups before progressing to the hotel intergrate PMS setup and that was a steep learning curve but as it was for a job the learning time was justified as well as being a valuable learning experience anyway.

I have to be careful not to overcommit. Unfortunately my first one is a bigger project. I need to integrate some sort of a time clock system, and loyalty cards, ticketing for on-site events or rides, multiple food stands, but not really any tables, etc.

I’ve spend a lot of time reading the forums and playing around. What would you recommend as a good starting point to learn as you go?

The problem I seem to have, is that I hit one small snag that ends up talking hours to solve for me, and it puts me behind. However, for the most part, it comes easy.