Another addition to order tags

is it possible to add a option to allow multiple prefixed order tags(like multiple instances of tags but prefixed differently) for example,

you have a sub. 1st half you want onions, green peppers, tomatoes
and second half you want tomatoes, onions and bacon
so you would get

currently what i have to do is
Foot long sub

I just want to add that r.e.v.e.l systems for pizza solution on the ipad offer and showcase this feature in their product video because its an attractive system to attract pizza shops and maybe sub shops like subway etc.

This is the way I handle half & half Pizza: with Product Portions… 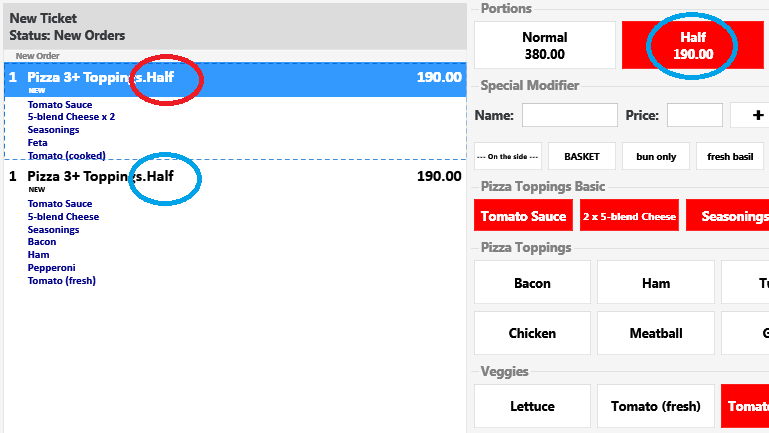 Dear @QMcKay, I have tested this, and in my kitchen I havew the problem that in a busy saturday we sell 30 pizzas in two hours, and when the time comes that the kitchen is complicated they do TWO (2) pizzas instead of ONE (1) half and half…

I think this is an interesting point to discuss with @emre and @JohnS to see if we can develop a solution with the available tools. I personally imagin that if the managed to come accross the cupons and gift certificates, this should not be that complicated

So is it solved here ?

Pizza Place Half and Half Pizzas V4 Question

I solved it this way: I added a Prefix [image] Then I added all the pizza flavors as order tags but with a Filter, in this case the filter is the Prefix (METADE) [image] So the result is: [image] [image] Hope this becomes usefull for others!!! G.

Its solved… it works for me, but maybe someone comes with a better idea… that is why I have posted how I did it…