It does match. The same automation command name was clicked and everything update properly

Try my first method… you may not want to use multiple rules but try it. OH BTW you have to delete the action from rule and save… then readd it or any changes will not be in effect.

If you do not use auto select then it cannot change portion because it has nothing to set… Reason the button works is because you have to SELECT the item to press the button. Item has to be selected to change portion…

I will rebuild it without auto select and see what I can come up with.

Ok I was wrong it is changing it…but because its not set to auto apply it is waiting to apply it. I am not sure we can get this to work without auto apply… but I will see if I can.

EDIT: It would be nice if it updated instantly… but does it really matter? As soon as you add another item it updates, if you press close it updates, and if you take payment it will update. So it is really not broken its just a visual issue. I think it has to do with Auto Select not being on and it not actually applying until you press close.

Yes, user will get confused for a second when you select something but screen won’t change. User has to move to the next order and check back again if it is correct.

Even with Auto Select, sometime it won’t update until user click close.

Sorry I’ve lost the point here. Unlike title suggests automation command works properly but there is a screen refresh issue here. It is true?

You are correct emre. I reproduced his issue… the command is working fine. The real issue is when a portion is updated via action which is fired by pressing the menu item by setting an Automation Command in the Menu Items Properties and Auto Select is not selected it will not update the portion on the screen until you press close or add another item.

Adding another action like Close ticket or refresh screen after the update order… doesnt seem to affect it.

To be clear, and to be sure everyone else knows what you’re talking about, this is the area that is misbehaving, correct?

It is firing the command when mapped there. I confirmed that… WHat it is not doing is updating the screen to reflect that change until close is pressed or next item added. So the command is working from the menu… just the screen is not updating the new portion value.

He is firing an Ask Question action via the automation command from mapping it there. And it works just fine the question comes up. IT actually does change portion it just will not show it on screen unless Auto Select is activated or he presses close.

That’s what I figured. The Command is being fired from Menu Item Properties, but it is not updating the screen - so it is misbehaving

On the other hand, if you fire the Command with a Button, the screen updates properly - it is behaving.

Yes, The area in the picture is the area of the problem.

Umm I’ve solved something but I think we’ll be able to understand if it works fine or not after @sukasem tests it. It will be available on next update.

Can’t wait to try.
Actually, it’s not just portion but order tag too. it seem like when it was fired in the background, the process stay in the background. But I don’t know why Display Ticket won’t work.

its odd that close ticket wont work either if its in same rule but it works if you manually press it.

I had the same problem, but no answer at all…

I have a rule that changes the price list. This is working good. In order to the change of prices be effective I need to close the ticket. I have added the closeticket action to the rule but nothing happens… tried with displaypaymentascreen and nothing happens. Show message works. Display popup works Pay ticket does not work… Have clues what is going on… Thanks G

My happy hour rule is working great, just need to close the ticket manually… becuase the action Close Ticket is not working outside the CLOSE TICKET BUTTON… strange…

@gerlandog that is something entirely different. We are not talking about actually closing the ticket in this case.

its odd that close ticket wont work either if its in same rule but it works if you manually press it.

Close Ticket` action from inside a rule?

This is the Close Ticket Button that comes original with Samba… 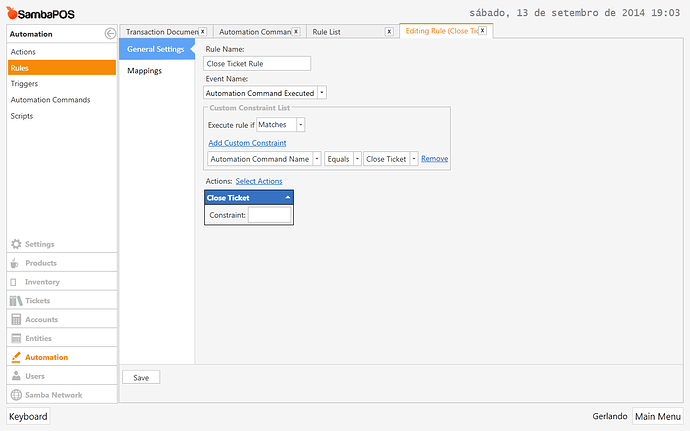 this is a rule where I call the same action…

The original actually closes the ticket… the second one does not…

No that is not what I am saying. I was not attempting to close ticket. I was attempting to use it as a method to close just the Order Tags menu which is completely different than what you were attempting to do in your issue.

OK, so you are using CLOSE TICKET to close order tags?