the other order would move up. that way you can keep the sequence

a little more detail about recalling tickets.
the 8th screen would remain blank untill a recall would is needed.
to recall we would hit the recall button and the last cleared order would come up. you would then cycle thru using the arrows, and after you get ot the ticket you need you would hit a numbered button and it would send that order to that screen

example: you recall a ticket (it is at the recall box) then you hit the 3 button, that order moved to the 3 box now and the orders after it move down. 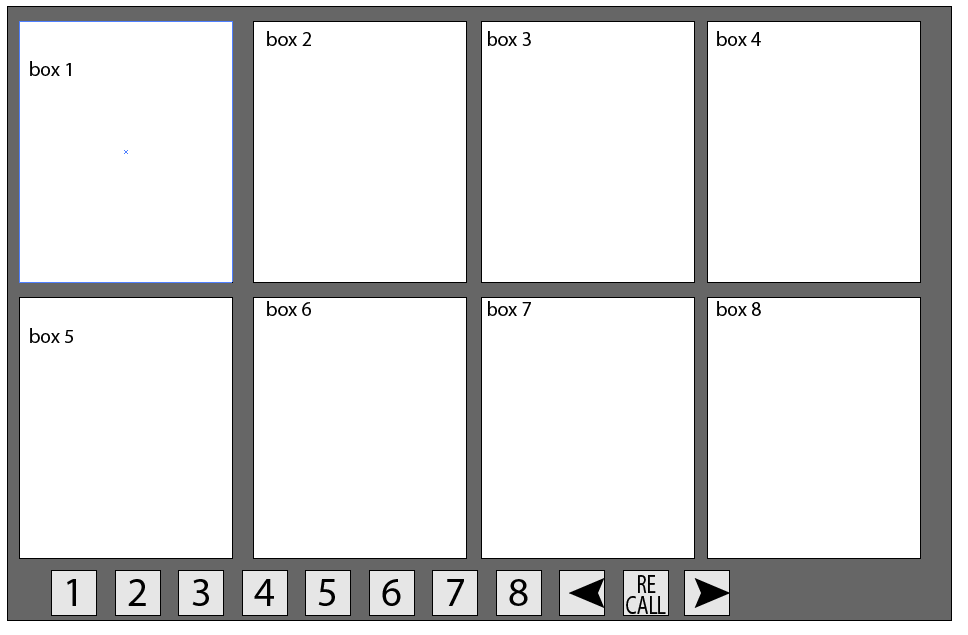 @emre, I think we need an Action for Complete Task to be able to do this.

As I was attempting before, we need an input method on the screen, even if it is obfuscated, like an Editor Widget so that we have a method to receive a Box Number/ID to operate on…

But then we need to be a able to mark a Task as complete, given the Tasks Name or ID. Currently the only way I know to do it is via the Task Type buttons at the bottom of the Widget. 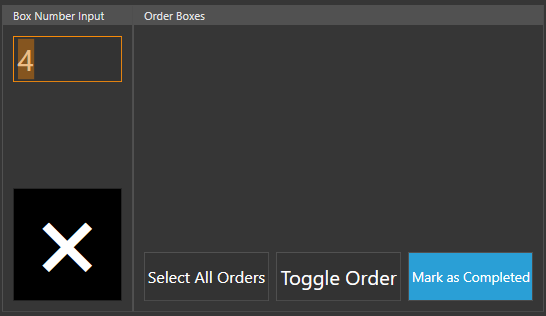 We currently have 1 Action: Add Task

We could use Actions for :

We might already be able to Update a Task using the Add Task Action, if we ensure the Content contains an Identifier. I will check into that.

Just in case consideration was given to a “Complete Task” it well worth while completing the other two mentioned here.

Im going to post the work flow of a bump bar at a fast food place I used to work in, if I remember they were running NCR compris. 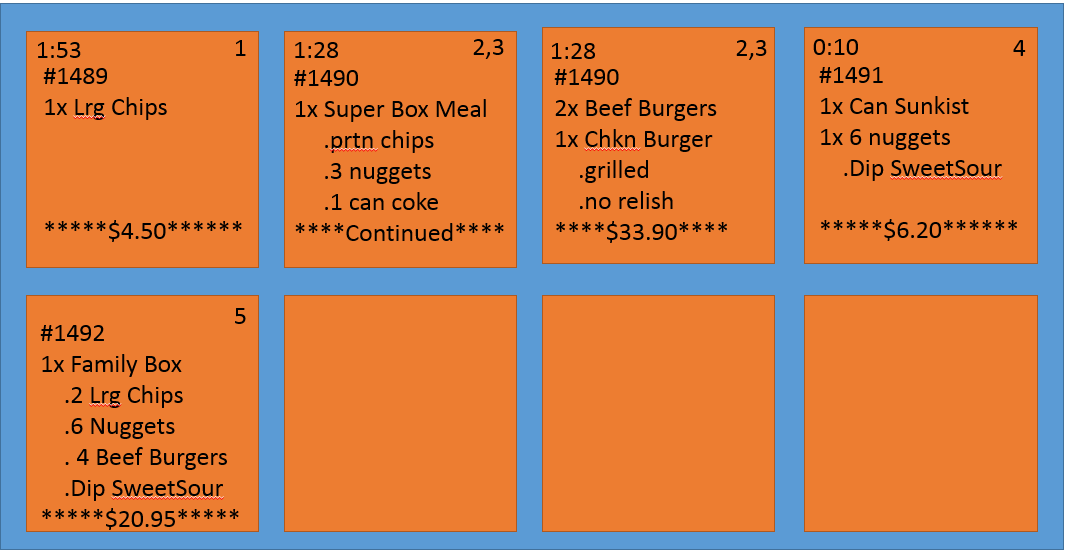 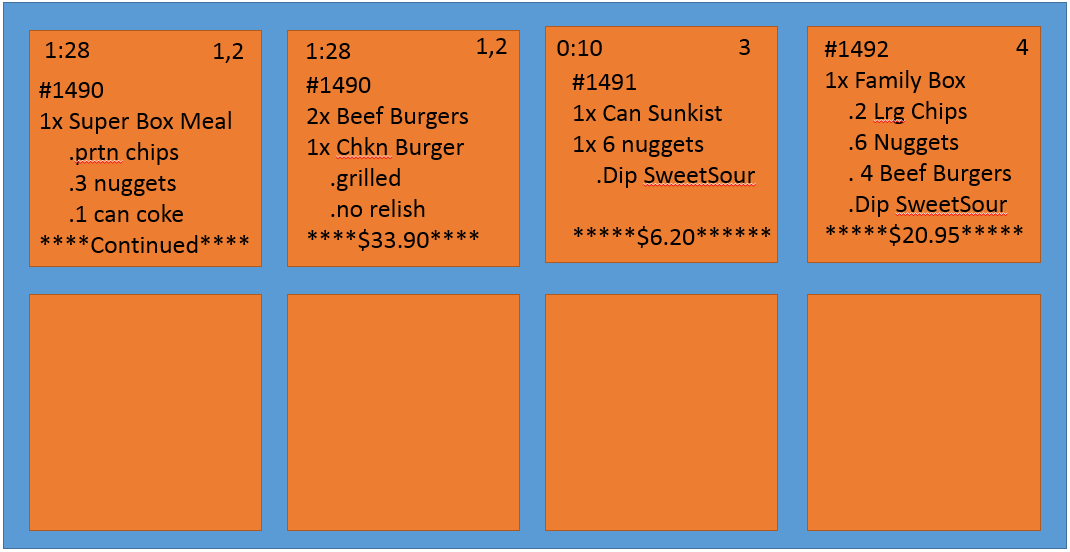 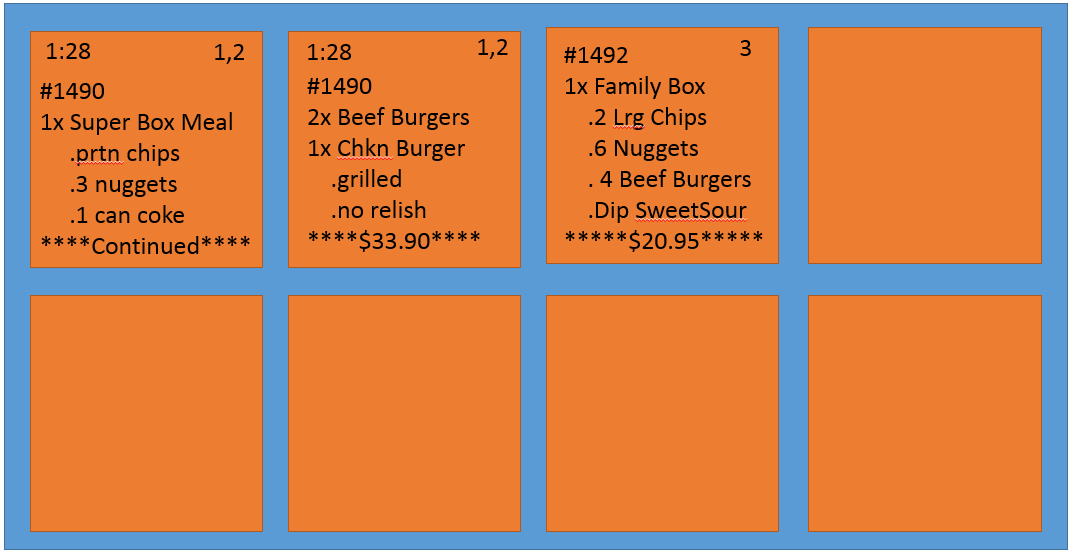 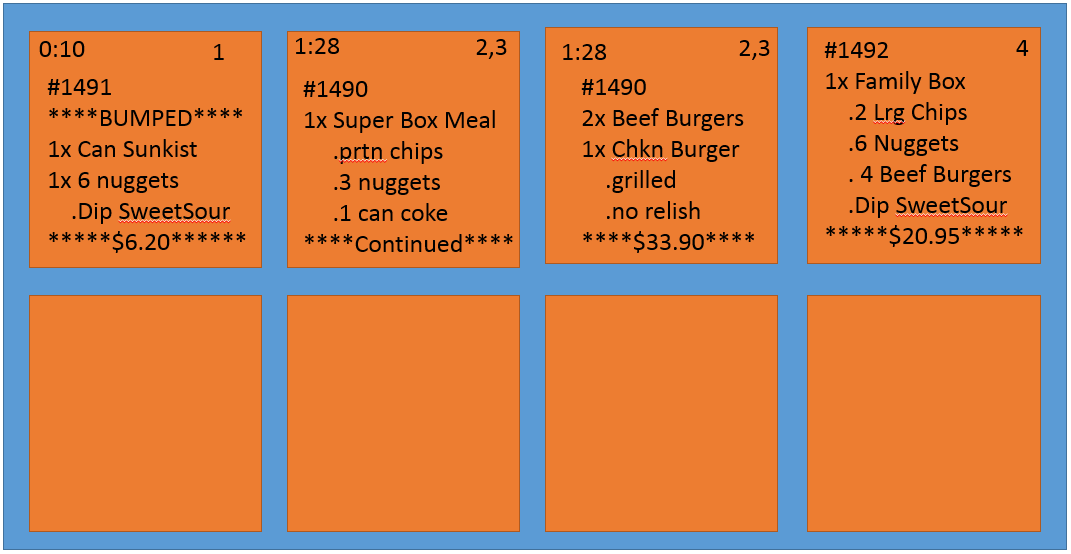 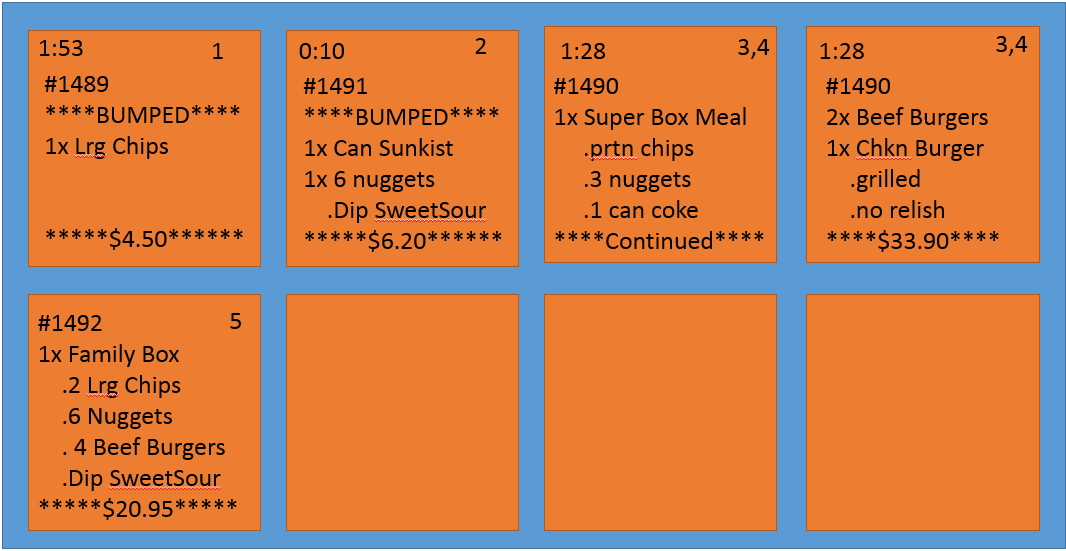 Im not sure if this is the workflow that OP wanted but it’s the flow of KDS screens and bump screens Im used to seeing.

@QMcKay I’m not sure if Task Complete action is something you’ll want as it won’t be aware of widget settings. Wouldn’t executing task actions (button commands) via “Set Widget Value” action be a better solution?

Maybe that might work. I can give that a try…

Not sure how we would effect the action on the selected Task however since the Set Widget Value Action applies to the entire Widget, does it not?

Unless you are suggesting we have 8 Task Editor Widgets for each of the 8 boxes? That somewhat defeats the purpose of the Widget itself…

No don’t try it there is no such feature atm.

I thought we can add a command for completing tasks by position. For example (TOGGLE:2) toggles 2nd position.

add a command for completing tasks by position

Ahh… I see, that makes much more sense, yes… because I was going to handle all the “position ID shuffling” in code/automation somehow (had not worked out exactly how, but…). If we can address a position directly, it would make things much easier. 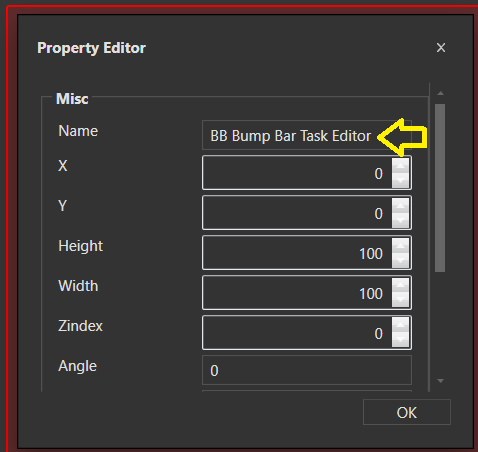 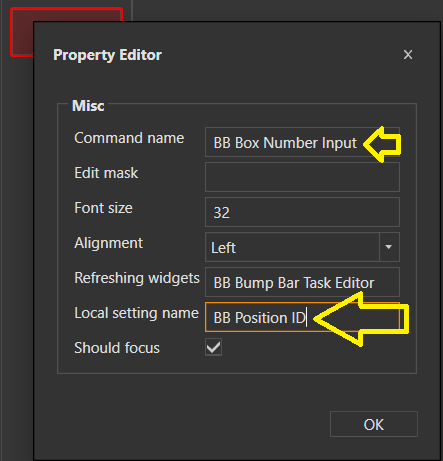 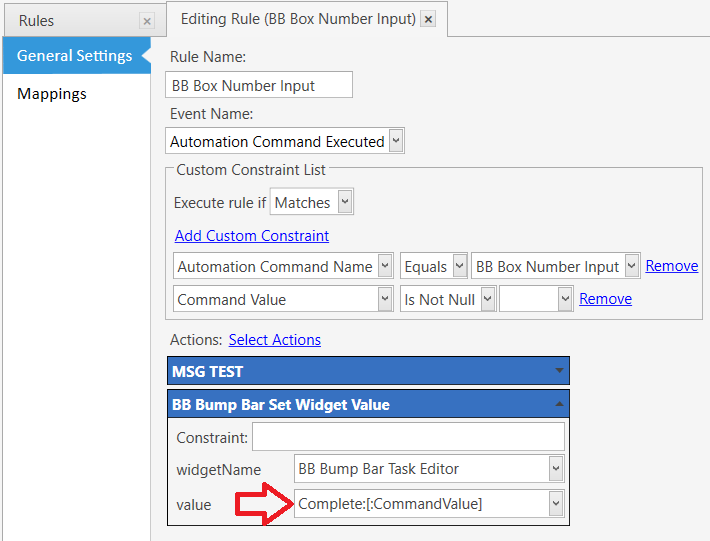 The value could also have been the affected Local Setting from the Editor Widget:

So where we set the value for the widget, is this the idea?

IIRC, we recently have a feature or a way to “send Enter key” with Editor Widget? Or no?

That should be the reverse. We should capture keyboard keys and execute actions.

Yes, I understand that… but as of right now, we have no method to capture keys on the Entity Screen, unless we have an input method - that being and Editor Widget or Task Editor Widget which is in focus.

So the idea is to send the Editor Widget Value in an Automation Command and execute Actions based on that value. But we need to either hit “enter” or “tab” to execute the command, or we need to click on a button to invoke the Rule. 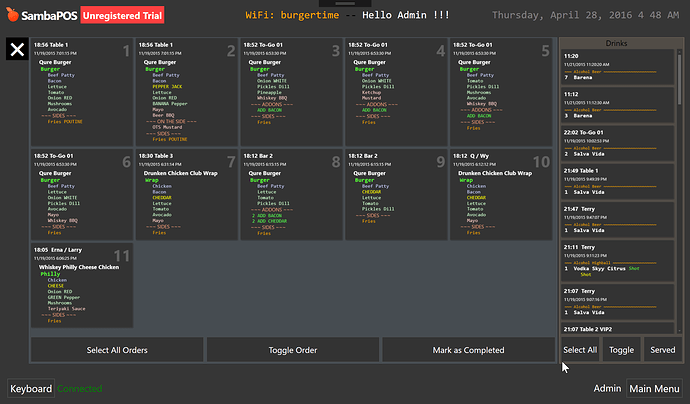 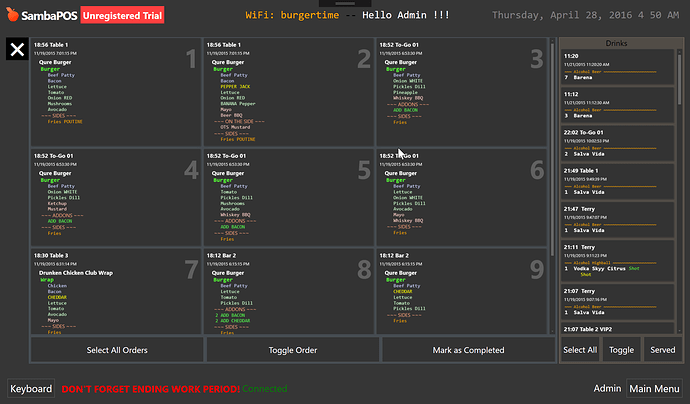 Can we have like Block 0 is the big one maybe 1 column. This block is the one that chef is working on. So, maybe this block is only show when chef bump other boxes to this box. When bump multiple cards maybe it also merge the same items so, it easier to see and cleaner.

What do you guy think? 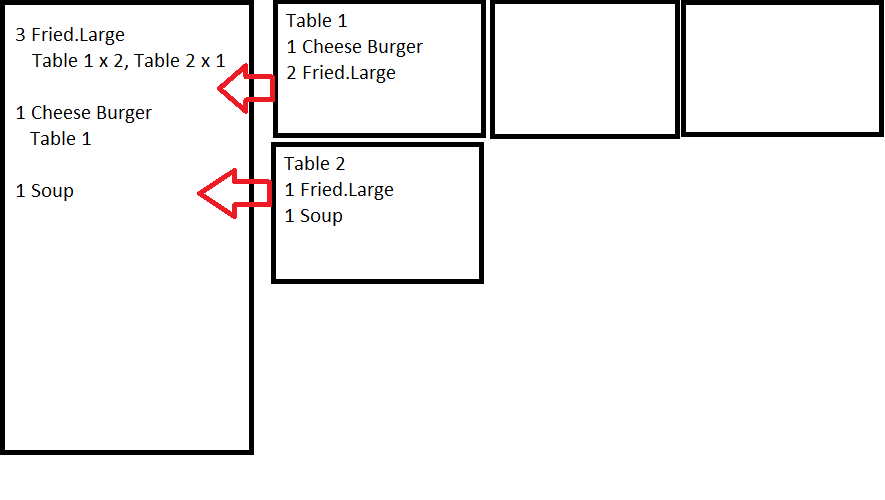 when chef bump other boxes to this box. When bump multiple cards

Can you explain how this works with the Bump Bar?

I mean, how does the Chef select multiple boxes/cards at the same time for the “bump”?