Theres nothing built in other than using the account screens. When v5 is released ill post the setup of my cashup screen so you can adapt it to your needs

Rick, Im very interested in seeing the setup for this I am currently trialing v5. Are you still planning on posting it?

Does anyone know how to set up the cash up screen that @RickH showed screenshots of? I’ve seen a number of requests from the community for this type of functionality?

It is possible now. He used a combination of features exclusive to version 5 and some available since version 4 including:

This thread was built by scraping feature discussions and initial testing in a Staff conversation before it was released to the V5 Beta Team. It is therefore a bit messy and disorganized, but the intent was to try and document new things as they were developed and tested, so that we wouldn’t lose track of things that were introduced. Many of the features listed herein are very brief and only serve to remind us what was adde…

Specifically <block> and <color> tags as well as few others.

Read through the features page and start messing around with it and you will get the idea of what he did. Examples of how to use Editor Widget are also located inside that Feature Compilation thread.

is there an easier way to set up the cash up screen? I don’t understand all these codes…
Can you explain step by stem with screenshot? like in the usual tutorials??

This sounds like a good idea, my next project to work on!

I wouldn’t get your hopes up for him to give you a step by step before then. You really should start experimenting with it.

Make a backup and your fine. If you scared to learn how it works then you will never fully understand it.

Or if you have access to another PC use it as a test.

Please keep in mind that everyone on SambaPOS forum are volunteering their time to help others. So please do not quote dates you need something to be done for and expect people to help you. This is your own deadline and nothing to do with users on the forum. If you want to do it by next Tuesday, then either spend the time to do it yourself, or post to the Ads category and someone might be able to help you for a fee.

Sorry if I’m being too direct, however I don’t think it is very polite to post a date and expect people to help YOU for free to meet YOUR deadlines.

i didn’t command anybody to finish it by that time… and i said i WANT to launch it on Tuesday, i didn’t say i MUST launch it. and i’m in south africa… my time zone is way different. so if i offended anybody. i do apologize.

It is ok I just wanted you to not get disappointed if you don’t get a step by step tutorial before that time.

The reason you have not seen one yet is not because that setup is hard to create, It is actually simple and easy to create, its the fact that it is VERY tedius. Lots of repetitive copying of widgets and automation commands and setting names etc.

Its an easy setup to get working its just VERY tedius and kind of like laying a 2000 acre cobble stone rode by hand with 1 stone at a time. Its not hard… just well annoying to do it again once you did it the first time…

For those that want to have a look at my cash up setup and try to work out your own version ive attached a backup of my database. Im still hard at work developing it and still has loads to do, i dont use the “built in” category and menu setup as im building a retail/quick sale bar setup using custom products in one menu so it will look very different to what your used to 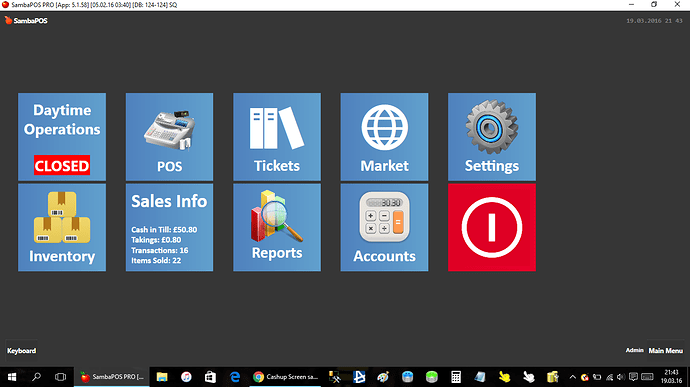 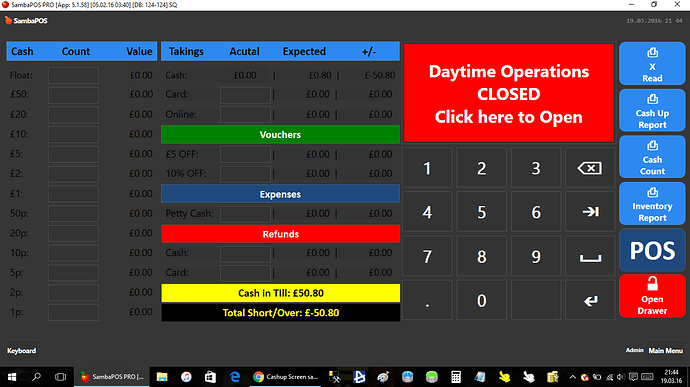 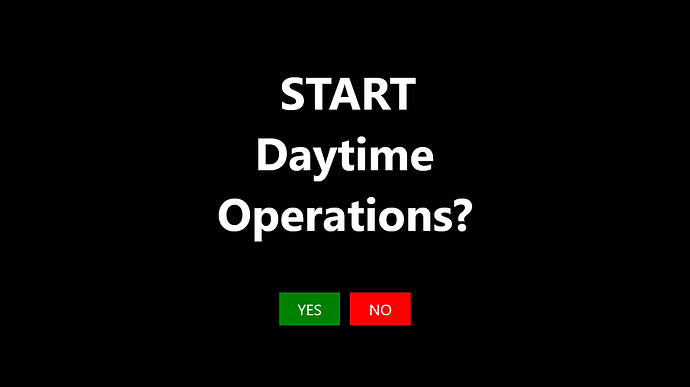 then enter your float value 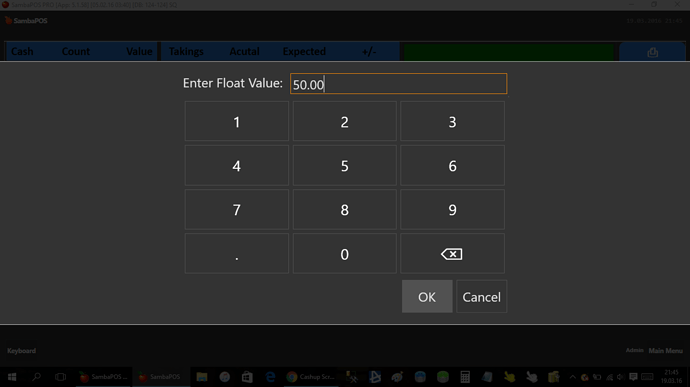 you will then be logged out (ive set auto logout to happen after opening work period and entering float as this is done by Admin, staff can then log in to perform sales

if you log back in and go back into the daytime opertions (which now shows open on the button) you will see all the figures reset leaving just the “Cash in Till” (yellow bar in bottom middle of the screen) with whatever float value you entered as that is the current value of the cash in your till drawer. i added £50 when i just opened the work period as shown above 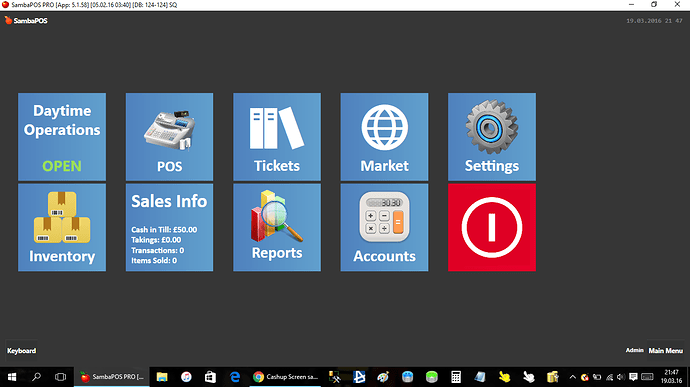 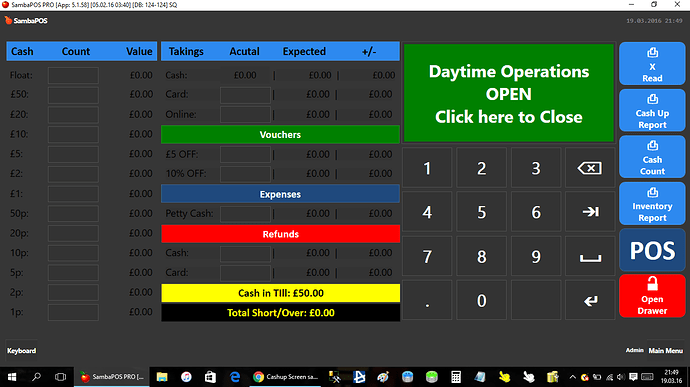 A tutorial is still on my to do list but im just so busy and it will take a long time to do i dont know when ill have chance to do it. you may be able to work out the actions and rules and create a database tools file to import into your setup, just ensure you backup first

Great I may turn it into a configuration task.

good idea, ive not even had time to look at configuration tasks yet lol

and youll probably be soooo much quicker at doing it too

Might take a little work but I could make it dynamic like let you choose your currency on install and adjust the font color etc based on what Theme your using, Dark or Light. I am working on it now. 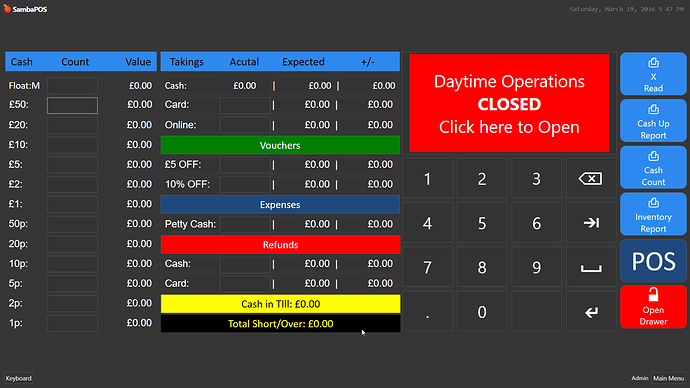 I kind of prefer white text on the dark theme.

EDIT: Very NICE @rickh I like your report templates too for your reads. I can also make those dynamic based on currency.

I will probably remove vouchers and Refunds for the config task it will just be a basic setup but man thats a great job.

im just updating the look of it at the moment too, and i might need your help with changing the keypad, i tried adding separate auto commands for each button like i setup on my custom pos screen using custom products as auto commands but couldnt get them working on the cash up screen.

Quick question do you intend people to be able to use it when WP is closed? It looked like it was giving false reading when WP was closed.

no they cant use it when closed, i noticed that it saved the last figures on close instead on resetting them. when you open a new work period the previous settings on the screen disappear