So we should probably restrict the ability to use them when WP is closed. I will look into best route to do that.

@RickH so we can add action constraints of ‘{:ISCURRENTWORKPERIODOPEN}’ == ‘TRUE’ to the actions inside the rule to restrict it from working if its not open. 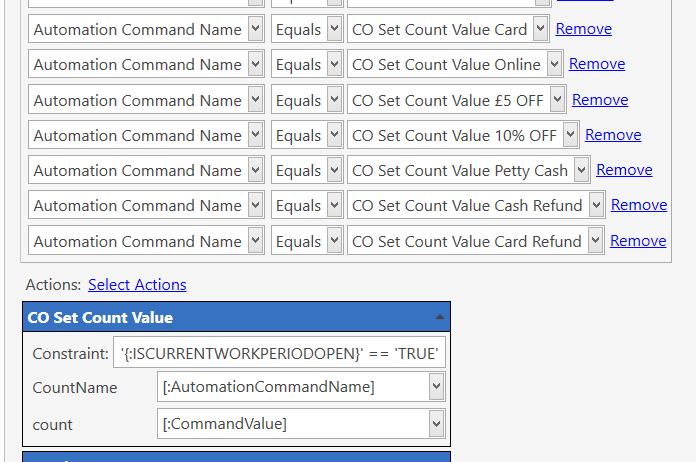 Now I am working on a way to clear the values.

EDIT: Ok so maybe we should add a button on the screen to reset values.

or a reset when WP is closed?

Work Period ended seems like a good time to refresh them as well. But a manual refresh button might be useful.

When do you clear your float in accounting? Nevermind I might have found it…

@rickH we can probably simplify this setup using Tasks… I will take a look and let you know.

I am thinking a single task with custom data for each demonination. This would allow reporting on past balance operations etc. It would give you ability to track down possible cashup entry mistakes.

The task would simplify it because you could do away with settings and simplify the rules etc. Would make future updates easier.

I know we could create a table and use SQL queries but would this be missed out of a backup?!?

I think the ability to creat custom tables or something similar to how we do custom entity fields which we have a tag for would be nice.

For example you could then utilise a rolling/flexible float rather than a fixed float and still retain reporting functionality/history etc is that variable float remains recorded for cf and by figures etc.

You can somewhat do that now with tasks. Tasks combined with JSCRIPT and SQL DETAILS tag would be a great way to do that.

I know we could create a table and use SQL queries but would this be missed out of a backup?!?

No it would backup the same.

Loooking through your database shows you really how much customisation youve done. Particullary like the bar tab not needing an customer entity

youve obviously spent so much time on it. Is their any way of getting the images you used?

@RickH Just as a side question - I downloaded your database but noticed some parts appeared to be incomplete? Actually I was keen to look at the way you handled refunds and your custom keyboard menu, but I notice the refund button to initiate a refund is not there. Obviously I know you wiped all your transaction data from it before uploading but were you aware some other parts were broken as well?

Im in the middle of completed redesigning it, its still a work in progress

Rhe refunds work by adding an item to the ticket, selecting it and pressing the refund button (not currently added to my pos screen setup)

I also set a similar system for wastage for drink spillages etc. It work the same way (without the reason and inventory questions) then when all wastage is added to the ticket you press the wastage button the “pay” the ticket which updates the inventory and puts the wastage “payment” amount into the wastage account. This way you can track the value of wastage and report on it

Its actually working exactly like the screenshots i did in this topic, ive not changed that setup at all yet i just havent put the refund buttons in my new pos screen or mapped the refund card and cash buttons yet

This will take a while to post so until i have time to do a step by step guide here are some screen shots of my refund system Add order to ticket [image] Select the order just added and press refund button [image] Select YES or NO to return item back into inventory. YES will increase inventory, NO will not change inventory level [image] Select the reason for return [image] Ticket has now changed to a refund ticket, ticket header has update and turned red, the order state has …

DB Tools Import File with all the pieces of my version… fill yer boots. 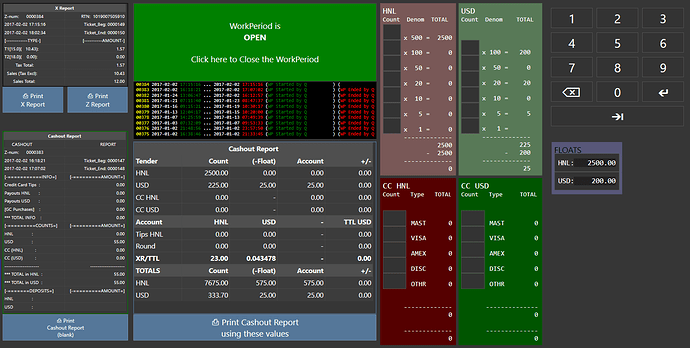 Most elements contained in the file are prefixed by WP (Workperiod) or CO (Cashout) or contain as part of their name, the word Workperiod or Cashout. This includes Entity Screens, Automation Commands, Actions, Rules, Reports, etc. For example, these are some of the Rules for each:

If there appears to be anything missing or does not quite seem to work properly, I might have missed an element, or it is specific to my setup that does not exists in yours so it might break. As an example, the Cashcount Report references specific Accounts that you will certainly not have in your system, so you will need to edit that report to remove reference to Accounts that you do not have. I cannot fix this for you - you need to do it yourself. This is precisely why there is not a “default generic” setup for this built into SambaPOS in the first place, which is what I have been trying to explain all along.

But you have the basic pieces you need to get you started. Go ahead and let me know what trouble you might be experiencing and I will try to help you with it. Best to provide screenshots or any potential error messages. Other than that, this is really for studying and learning purposes, so I encourage you to experiment with it and modify it to suit your needs.

If you don’t know what a DB Tools Import file is, it is a TXT file containing Configuration Elements that you can inject into your Database to instantly create necessary pieces for Automation or other types of setups without needing to follow a Tutorial and create everything manually. This is what you do to load it into your DB: 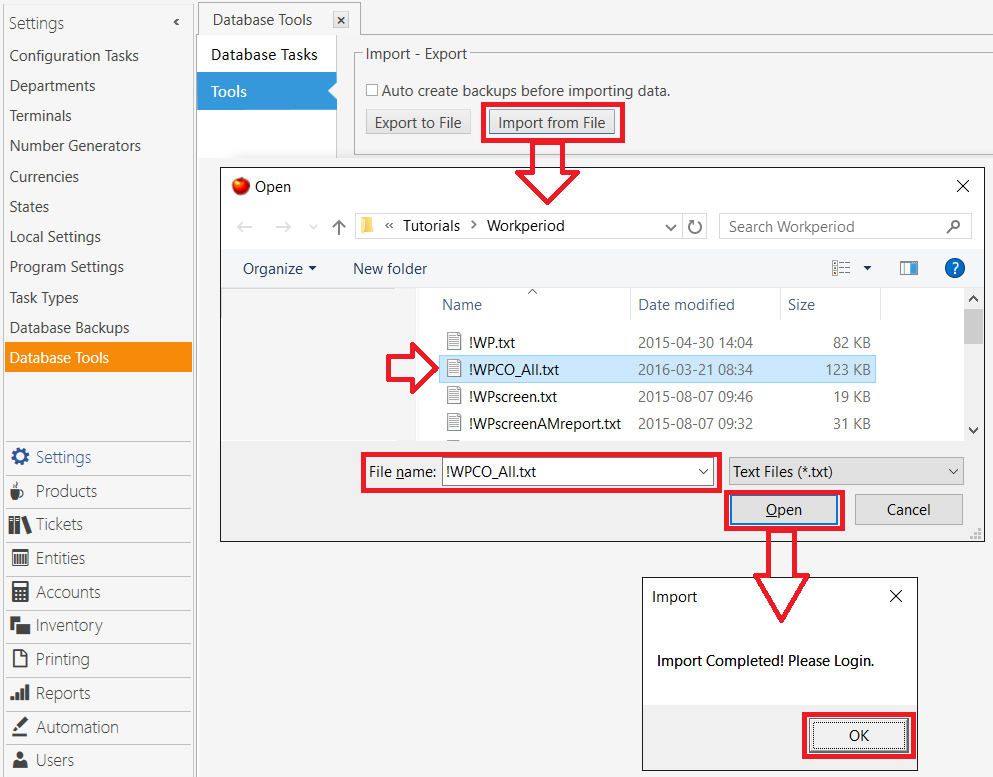 Could break the Web’s download compacity with the number of hits! Kim K eat your heart out…

Oke… so i have imported the .txt file, but nothing changed??

If the Import was successful, you should have a black Workperiod button on your Main Menu Navigation Screen as well as a bunch of Actions and Rules in Automation. Clicking this button will take you to the Workperiod/Cashout Screen …

After you enable Custom Navigation, you need to go to Manage > Settings > Program Settings > Maintenance and click the button for Create Default Navigation Buttons, then either Logout and Log in or restart SambaPOS … 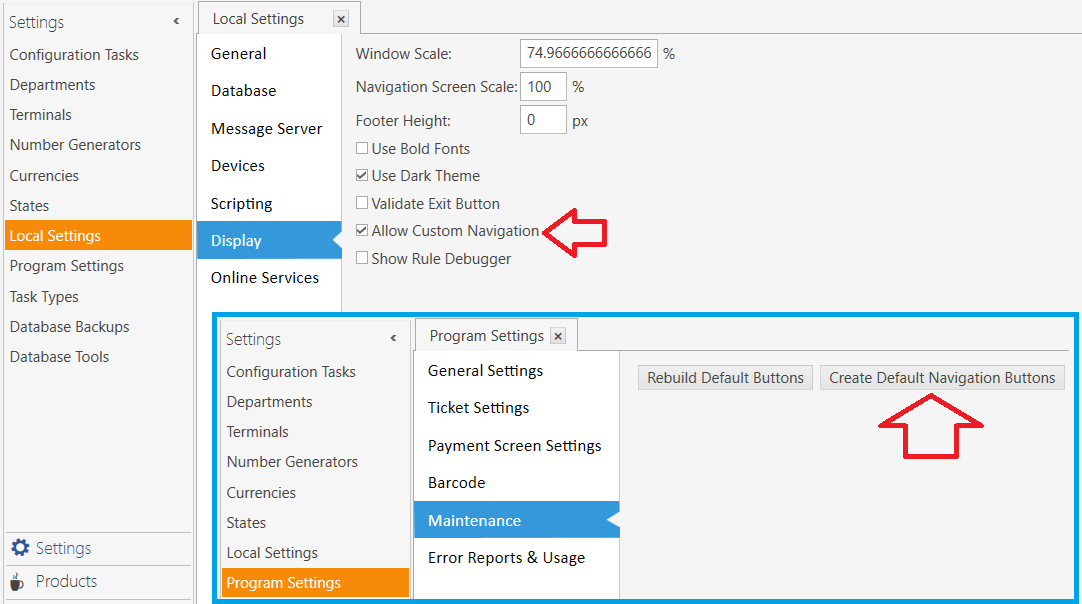 I know this is in the Import file, so you should already have this: 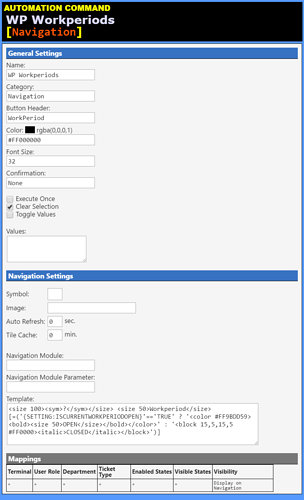 Updating the look of my cash up screen, now using automation commands to create my own keypad as i have done on my pos screen instead of using the keypad widget

More tweaking etc to be done but heres the idea 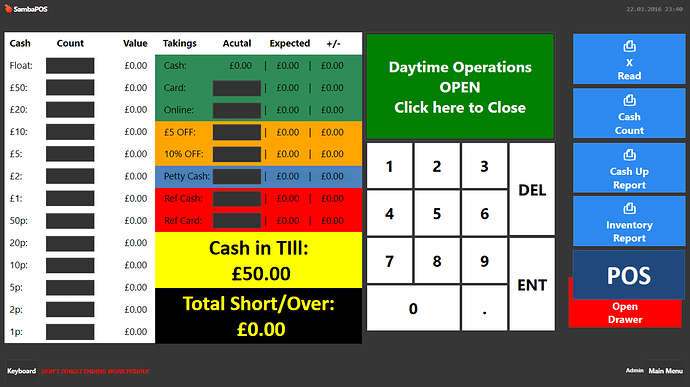 How do yo do this? Cashing up screen?