Is there any way of changing the colour of a product once added to a ticket? 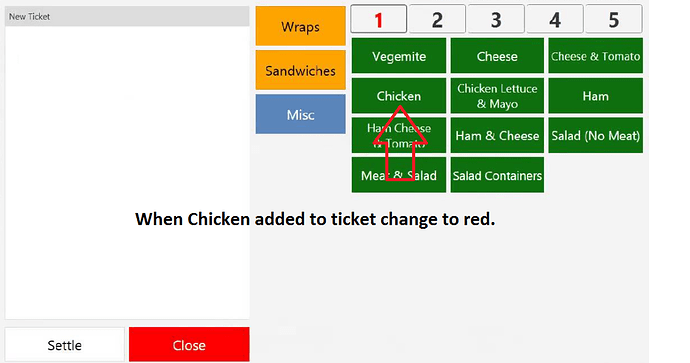 Don’t think so.
You mean just last order or for whole ticket?
You might try some form of ternary expression in button header but will involve one for each button as header doesn’t support say, {NAME} or $1 so of it did work it would be case of changing for each button…
If it were posible that way you would need to use a report type tag like ticket quantity sum:product name > 0
Really doubting it is posible though.

I’m trying to create a checklist of things completed. I created two menus.One with products and one with checklist items. I have a lot of items in the checklist. Its just an idea, example would be cleaning person in hotel, I would have a category called bathroom, bedroom, main room etc. When click on bedroom the check list would appear. When item added to ticket it would change colour so they would know completed.

Each Checklist item would be a product…

What do you mean by “ternary expression” can you give an example?

I think there would be better options for your intended use.

You could use Tasks for a checklist.

I’m trying to create a checklist of things completed. I created two menus.

Products and Menus are not meant for this. Use Task Types. They are very flexible, and their original design was intended for this kind of thing…

:running: You need to install at least 5.1.51 version ##What is a Task? If you’re using SambaPOS for a while you’ve probably wondered how you can use Task feature. A Task is a general purpose to-do like informational data that is useful to manage things we need to keep track of. We need to create a Task Type for each specific use case. For example if we need to create a todo list and another list to track utility bills we can create separate task types to separate these lists. Task Widgets u…

Would you not have to create each task for every day? I have tasks setup like in that tutorial and I do not think it would suit for the example I explained. That is why I tried to do it with products.

There is an Action for Add Task.

So you could automate the Task creation upon Appplication Started, or Workperiod Started, or push of a button, or whatever.