I have a rule that changes the price list. This is working good. In order to the change of prices be effective I need to close the ticket. I have added the closeticket action to the rule but nothing happens… tried with displaypaymentascreen and nothing happens. Show message works. Display popup works
Pay ticket does not work…

Have clues what is going on…

Remember though that there are many cases where you will be unable to close a Ticket. It needs to be assigned to an Entity (Customer or Table), or put on Hold (i.e. pre-order) before it can be closed.

You could use the abort button I just made a tutorial on.but it would cancel the order

I could be wrong but it looks like your trying to update price list in middle of a ticket which is impossible so your thinking to work around this I need to just close the ticket and reopen it. Except I believe even if you did manage that through parking the ticket, it will still not apply the new price list when you reopen the same ticket.

As far as I can tell the ONLY way to get the price list to go active for your ticket is to start a new ticket from scratch.

Wrong. If i close the ticket and open it again price list changes. TESTED!!!
You can mix in the same ticket different prices for the same prpduct. Also tested.
why close button works and close action not at the very same conditions?I tested this using close action, wich does nothing and if i press the close ticket button it works.

Is your department set to Choose Entity or Create ticket? Does it update any products you already had on the ticket? Example: Before you close ticket you had Item A rang up with 2.00 price… Close ticket hit your price list change button… open ticket is the price for Item A now different or does it still say 2.00?

Only reason I am asking is because I have not tested it and I was trying to understand your question about close action and close ticket button.

Close yickwt button executes close ticket action. You can look at it. You can have the same product with different prices in the same ticket.

My tickets are allways assigned to a table.
G.

I know that would work that makes sense… What I am asking is if you already had Item A rang up at 2.00 when you close ticket… activate your new price list then reopen the ticket is that Item that is already on the ticket now the new price or is it still 2.00 from when you originally added it?

Where were you calling the Close Ticket action? Were you using a Command Button? And where did you place that button? It could be the reason it was not working but the original button does is because the ticket was never actually loaded before your “Close Ticket” action executed meaning it had no ticket to close.

Ah ok then what I was thinking is correct… Reason it didnt work is because it had no ticket to close. You would have to load the ticket first then close it within the same rule. There is an action for Load Ticket that you would have to put into your Price list change rule. That would allow the rule to open the ticket then your close ticket action would work within that rule.

The reason the original button works is because the ticket is loaded for it already.

I am inside a loaded ticket when the rule executes. With active orders… that is whyI can see the close ticket button…

Yes but that rule does not have a ticket loaded… it will not pull that ticket automatically into it.

Ok. I will try with load ticket to see what happens

Try putting [:Ticket ID] in the action parameter and then [:CommandValue] for Ticket ID within the Rule. I will try testing this myself to see if I can figure it out.

I can get it to close a Ticket in a Rule. But re-opening it with a different Dept/PriceDef evades me for now. 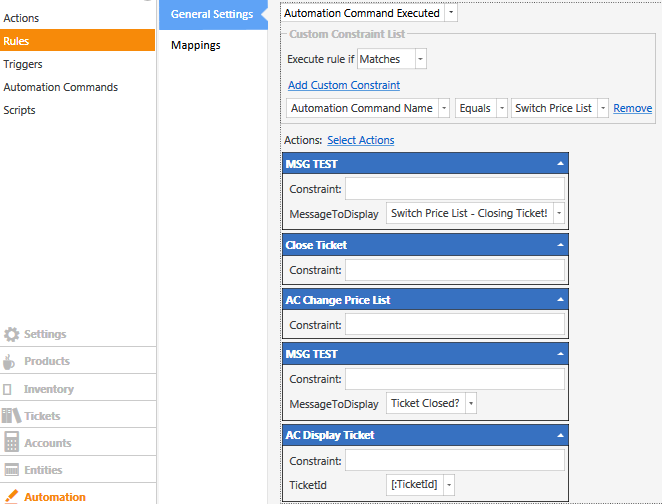 Yeah it works to close it… but for it to truely be efficient you would want it to imediately reopen it. Im stuck on that as well

I took a look into close ticket rule wich is executed after you click in close ticket button. There is no load ticket action there