Did anyone experience missing ticket even though it is printed?

I just run into a strange issue which I have not completely investigated.

I have a ticket say 1965 PRINTED but it is no where to be found in the the ticket listers.

Note: It is not a simple skipping Ticket No which I understand why. Ticket 1965 is printed and order made plus being paid, but this Ticket No. seems not in the system anymore. The final total in report also reflects the balance of the missing record not the proper total. Any suggestion where to look or what had happened?

I will double check whether the ticket is merged to one before or behind it but that still seems unable to answer the wrong balance though.

You can also look in the [Tickets] table in the DB to see if there is a record for it.

Merged then voided?
Not huge info to go one…
Is it defiantly ticket no and not ticket id?
A complete system crash can cause an unsubmitted ticket to be lost however I would expect (but not tested) the ticket number would not be skipped.

Yes I have same problem few times when I use two terminals same time, and ticket creation method in select ticket in one of the department which making orders disappears for me , than I changed the department to create ticket no problem .

Does anyone think this has to do with my situation that the ticket was printed but maybe a Ticket No or ID is NOT secured when someone else close it from another terminal?

Do you think a Save Ticket action help to solve the issue? 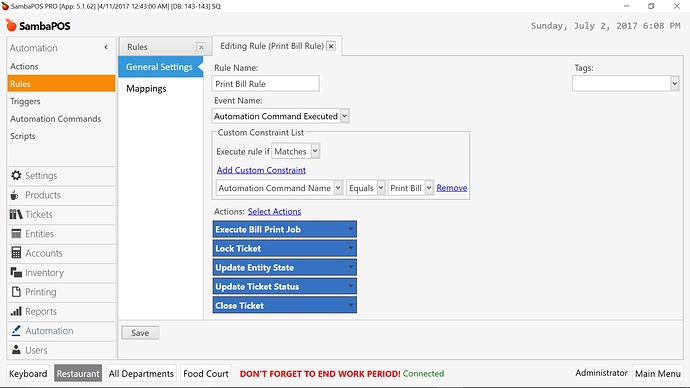 Ticket number is available for a ticket before saving.
Ticket ID isn’t available untill saved/submitted to DB.
To have ticket ID the ticket would need to be saved.
Similarly if a ticket haven’t been saved it wouldn’t be accessible on another till for someone else to close (unless I’ve misunderstood that part.

Maybe if you can explain how you know it is missing?

Ticket number is not always sequential for tickets as flows such as merging create a new ticket leaving previous tickets empty.
Also starting a ticket and canceling all the orders I believe would also use up a ticket number (but not a ticket ID.

The Close Ticket Action in that Rule will effectively Save the Ticket with a generated Id, assuming you have not altered any of the Default Rules having to do with Ticket Closing.

There are so many factors that can cause the elusive missing ticket… most of them are configuration mistakes or just confusion in how it works and is designed to work. You will need to give us more detailed information for us to give you better answers. All we can do is guess right now. We can give some very strong guesses but that is all we can do.

To recap
quote=“WingoLED, post:1, topic:15175”]
It is not a simple skipping Ticket No which I understand why. Ticket 1965 is printed and order made plus being paid, but this Ticket No. seems not in the system anymore. The final total in report also reflects the balance of the missing record not the proper total.
[/quote]

Once again this not about Ticket no. being not in sequence or skipping. It is about a ticket being printed with a Ticket No, and by the end of the day, I cannot find the ticket with this Ticket No. and that the report does not add the amount of money I have received to the summary.

To clarify the last statement in the recap, the total sales income reported is less than the actual money I received by the amount of ticket 1965 - that is even the “report” thinks there is no ticket no. 1965 and thus did not add the amount of money I collected for it. Since my cashier have printed the bill and thus able to collect the money from the customer.

Can you login to your database with MSSMS and look at tickets and does it skip that ticket?

Also expand your actions in that print bill rule so we see what they are doing.

That is the only print automation that you have?

Some how I am missing the MSSMS in this system as well LOL. Will have to re DL. BTW, I cannot remember the actual Ticket No.(1965 is a make up no for illustration) I lost. I will have to trace from the paper trail to locate it again. Well, this mystery does warrant the effort to find out when I have time.

OK. MSSMS loaded and logged in but need to learn how to use it now.

Highlight/select the Database, click New Query, and paste this in to the editor:

Scroll the result window to the bottom.
Scroll up a page at a time and look for missing Ticket Numbers.

If you know the Date/Time of the Ticket, you can filter your Query using [Date] column in WHERE clause with something like:

Or if you know the Ticket Number, filter by that column, like:

If you get no results with the Ticket Number filter, then it skipped somehow, but I expect this to be unlikely.

If you do get a result (there should be only 1), then I suggest looking at the [TicketStates] column to see what the Status State is for that Ticket.

Thanks for the SQL statement