If it possible to have display state and filter state of an entity screen using different state types?
Want to filter rooms by room status (occupied or vacant) but format using Status.
Tried and doesn’t seem to work.
Tried Status and Room Status=Occupied specifying the state type for the filter but didn’t help. 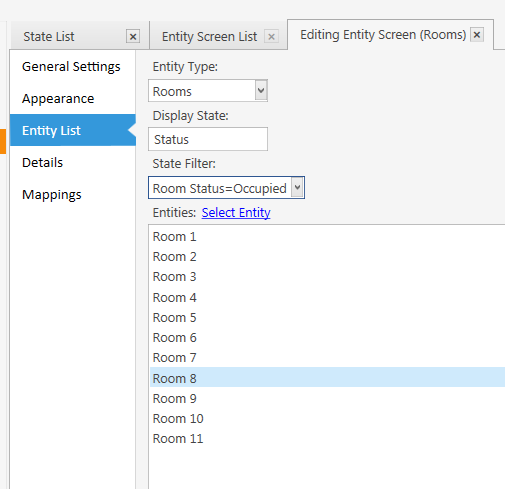 That should work, assuming you defined the State. It may not work if it is programmatically assigned and not defined.

Hmmmmmm,
Have this action; 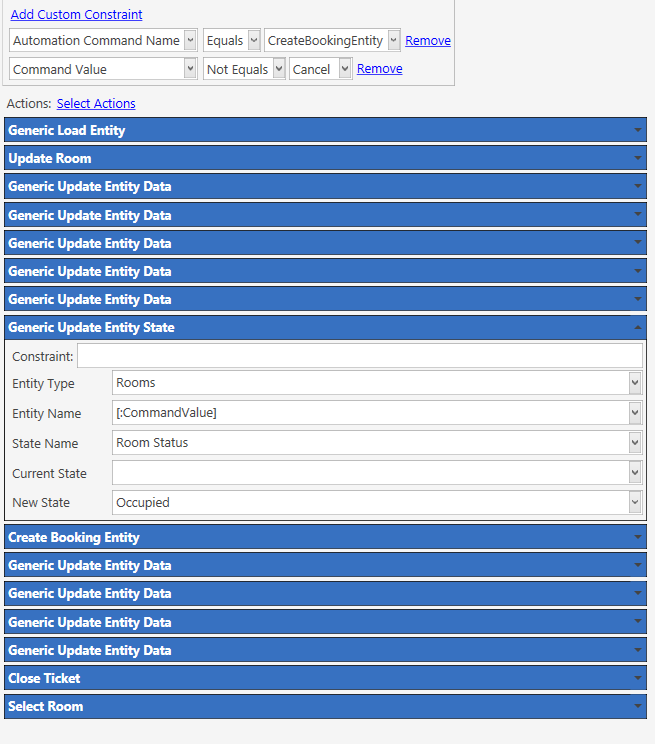 [:CommandValue] is the entity name fed from an entity grid widget.
All other actions are working ok…

Right, ok, but did you define the State in Settings > States ? 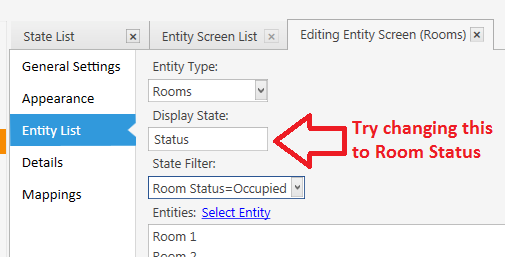 It works if I set display state to Room Status.
Wanted to have filtered to only rooms inhouse and they use status display if open ticket or not.

The state is being set somewhere as can be called in report entity detail… in my constraints and ask question.

is this a glitch?

Not a glitch. You want to filter on a State that you are not displaying. It’s seems different when it comes to Status, because there are many States in Status.

Emre may be able to have multiple Display State Groups? Not sure how that would be handled in the actual Display of Entities… which State Group do you obey in regard to, say, State Color? State Formatting?

The formatting would be from standard status colours. But the filter ideally to room status state which is occupied or vacant (show or don’t show)
I have an entity grid on a second screed which shows all room entity’s and powered the checkin, payments and checkout commands.

To be honest I could probably extend the room status to have third state of has open ticket and filter to occupied and has tickets so formatting can be applied to the two visible state values on that screen.

Tbh this is more titovating than functionality however think we should be able to display formatting from one state group but filter from another.

The more important issue at the mo is that account charging problem in my other post which would really a some suggestions on what the issue is there.

think we should be able to display formatting from one state group but filter from another.

I agree, that would be nice in many cases I’m sure.

Did you tried Room Status:Occupied ?

No, was trying Room Status=Occupied like would be used in mapping, will try this afternoon.

Firstly I would like to thank you all for assisting me in getting me system closer to working , I still have some way to go with Customer selection and search.

However I have a question.

But for the life of me I can not show this state , I trying to understand difference between Screen State 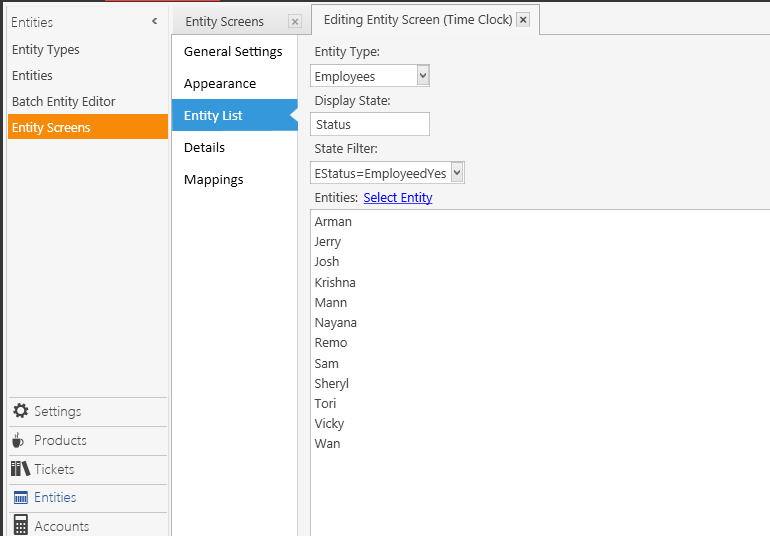 Sorry Display State and , State Filter can someone try and assist me .

would appreciate any assistance

For example, with both Customer and Table Entities, there is a State Name (Group) named Status. There are several States belonging to the Status group, for example: Available (color=White), New, New Orders (color=Orange), Bill Requested (color=Maroon).

##State Filter
Hides any Entities which do not have the designated State. You can specify a list of States for the State Filter, separated by commas.

For example, if you only wish to display Employee Entities which have a State equal to EmployedYes, and that State belongs to the State Name (Group) called Employed, you can set the State Filter to either of the following:

In some cases, you might want to include more than 1 State for displayed Entities. In this case, you can specify a coma-separated list. For example,

I have already setup the following correct me if I wrong

Your State definitions look fine. But are you certain the Entities in question have the State that you assume they do?

Use the Batch Entity Editor to definitively set the State of your Employees. There is a link that allows for updating multiple selected Entities in one go, using the format:

So in your case, select the checkbox next to your employed Entities and click the Update State link. In the box that appears, enter this:

Then, select the checkbox next to your UNemployed Entities and click the Update State link. In the box that appears, enter this: