After a few long days I finally got our system up and running. For the bar we have a printer on top of the bar, so the string of tickets won’t get wet

. However, this does come with a slight drawback, whenever we have a small ticket (1 coffee) it’s easily overlooked. The Epson TM-T88V does support beeps through its proprietary driver, and this does actually trigger two beeps when printing a test page from Windows. However, whenever Samba sends out a print job, the beep does not sound.

I was wondering if there’s anyone else with an Epson TM-T88V who got the beep to work with Samba through Printing template commands < example >.

For the record, I have tried the < BEEP > and < Bxy > commands as suggested by Emre in this post: Printer Template Formatting Tags

But no luck so far…

Hope the almighty community can help out!

The actual beep can be customised, based on the printer I have (not Epson) you can customise as follows:

Out of curiosity @markjw, where did you find that code?

Looking through the manual, I cannot find an ESC sequence for the Buzzer.

It only mentions this:

Optional Buzzer When to sound the buzzer is selectable from the following occasions:

So I assume that if you use the Utility to enable the Buzzer for Paper Cut, then it should just work, but I haven’t tried it… I don’t even know if my TM-T88V has an internal buzzer anyway LOL.

@QMcKay I use a cheap Chinese printer. I have found the beep tone works on different ones and given they are all “Epson compatible” the same code should work on Epson as well. I have clients using Epson and everything I’ve done works fine too.

I thought they all can beep. Not sure if buzzer is the same thing? I always thought an “optional buzzer” is a device you attach to cash drawer port to make a loud buzz sound when an order is received. The beep I use is just the beep of the printer. If you take paper out and turn on, it should beep right? That’s what the command lets you use.

Apparently, the printer can have an internal buzzer or not. You can also attach an external buzzer through the kick port.

The manual describes it as Beeping the Buzzer. I found the ESC code … 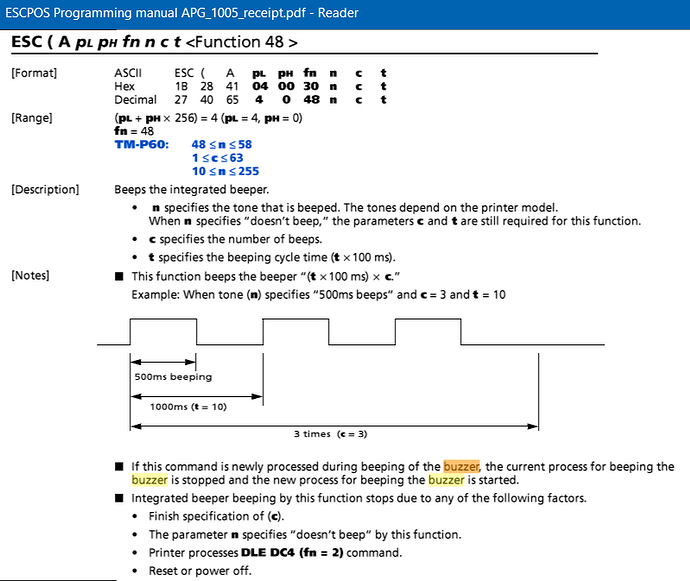 Last 3 digits are described as:

Regarding the Tone (n), this is the only reference that I can find, but it appears to be specific to model TM-P60 only. Maybe other models ignore this parameter? However, maybe you could try one of these, like 55 … 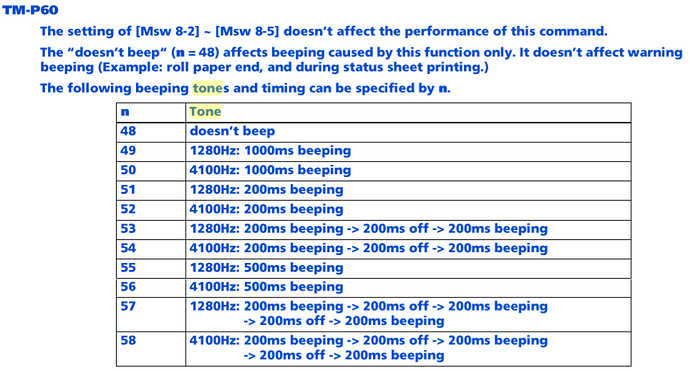 I found another reference that appears to be more complete. It seems the APG (Application Program Guide) is no longer being published as of v10.05 (which is the one I have), and it does not appear to contain references to the 88V (it mentions 88IV however).

This is an online reference that you need to Register for, and then you can filter command reference by Model. So I registered, filtered for 88V, and it shows this … 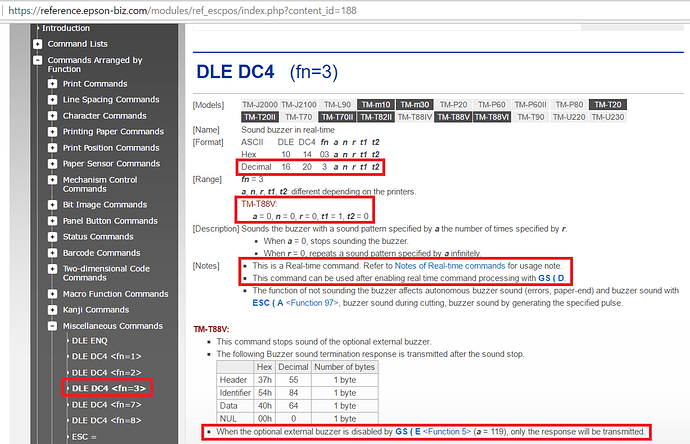 That indicates to me that this is the correct command:

However, the guide indicates we need to Enable Real-time Processing with command: G S ( D first … 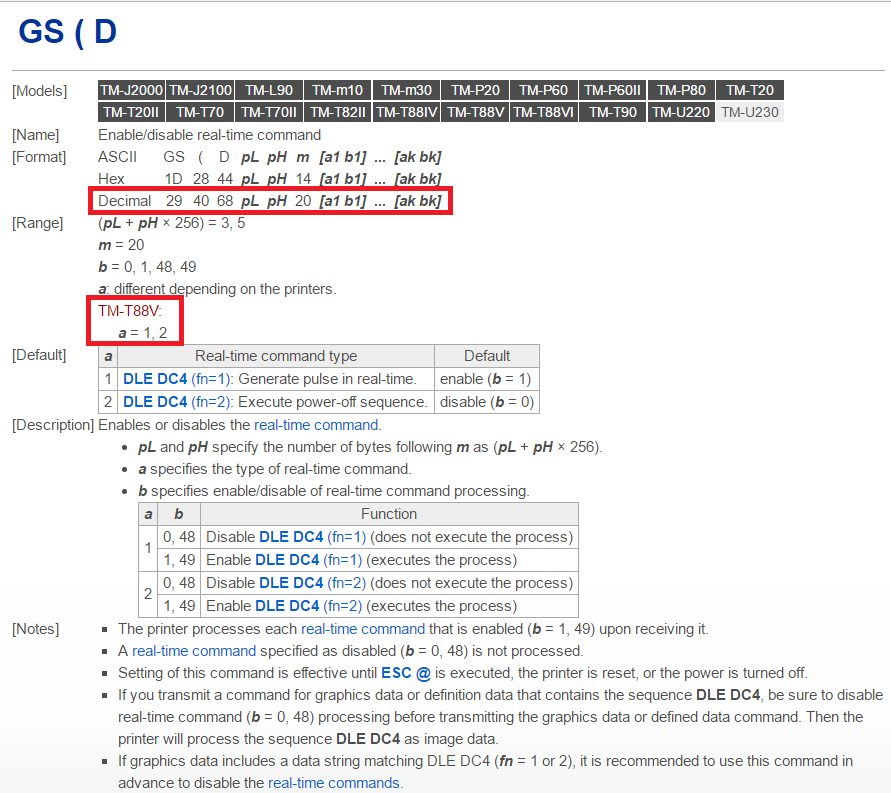 So to enable it, maybe we need to execute this first:

I don’t know for sure. Trying to decipher the reference hurts my head 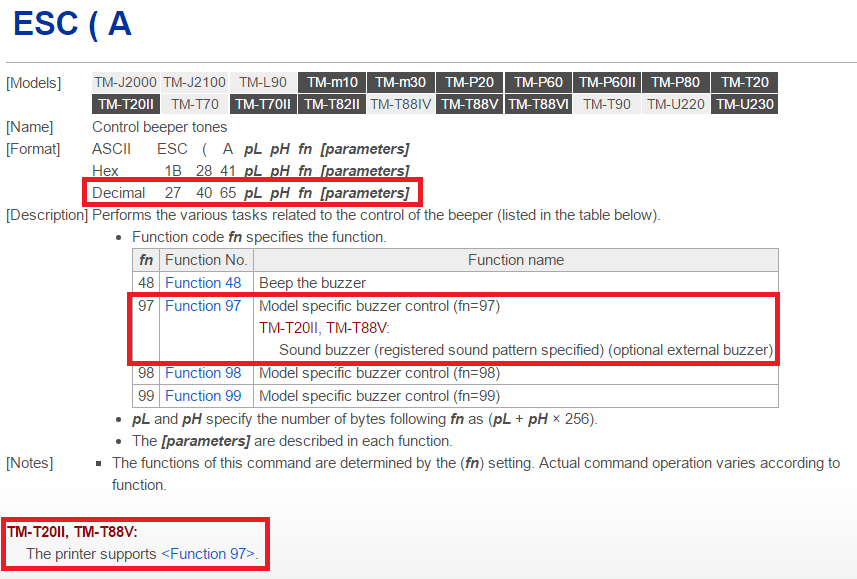 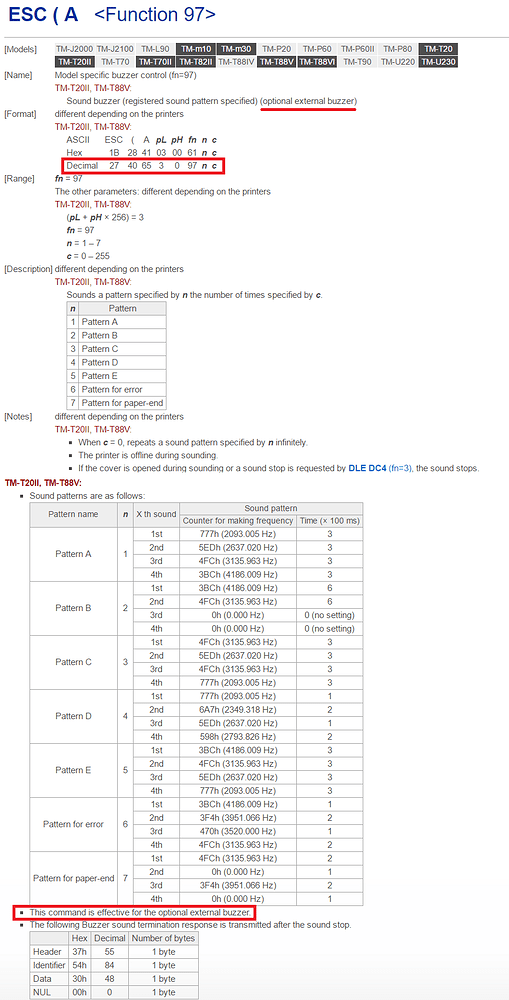 @QMcKay that all seems overly complex. I can’t imagine it would be more complicated on an Epson printer compared to a cheap Chinese one.

Did you try the code I suggested?

that all seems overly complex

I agree. I just posted all the information that I could find in the reference doc.

I haven’t had a chance to try it yet (I have a TM-T88V and a TM-T20II, both of which use the same commands for the buzzer) and I don’t even know if either of my printers have an internal buzzer to begin with.

I tried out some of the commands, but all to no luck.

Tried digging around the Epson drivers themselves, and found that the Advance Printer Driver 5 displays the feature more prominently in the second tab, whilst in APD version 4, the buzzer is hidden under some settings. In both versions of the driver you can get them to work though, through a regular windows print job, however not from POS.

It seems to me that the buzzer (at least in the TM-T88V I have) is the same as the error beep whenever the paper’s out, so probably the TM-T20II has the same type of buzzer. Maybe there is a way to intercept the command that is being sent to the printer (and thus, the buzzer) when performing a normal windows print job. It seems weird that Epson drivers do not handle a Samba print job the same they would do with a Windows print job, even though they both show up in the printer’s digital queue.

same as the error beep whenever the paper’s out

I have never heard my Printers make a sound, even when the paper is out. So I need to assume my printers don’t have the buzzer. If that is the case, there is no way for me to confirm any test commands.

I just checked with my printers, and they don’t make a sound when the paper’s out, so my bad for the misconception 0:-)

Have you tried using the Advanced Printer Driver 4 with the buzzer enabled before every document. In my case, when printing the windows test page it beeps two times before the document.

This setting is found under (yeah my screenshot is in Dutch, whoops…) Printer Preferences > Document Settings > Option Buzzer > Internal Buzzer.

You should try that, you’ll most likely have a buzzer in your printer. Only challenge now is to get Samba to recreate the command signal sent to the printer. 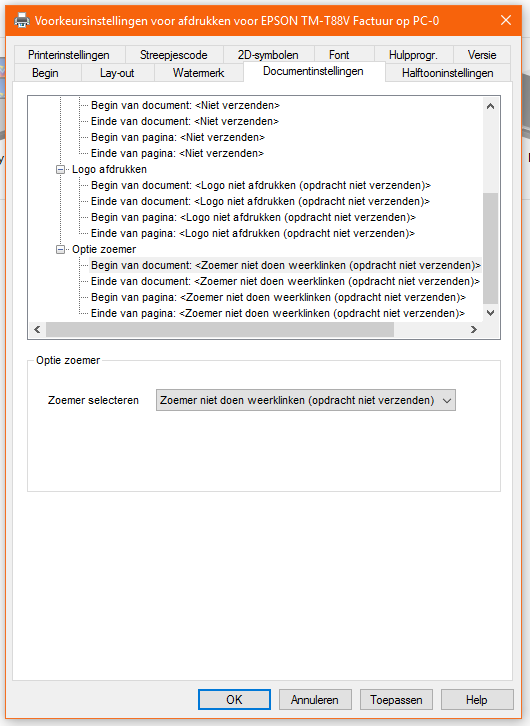 This is actually what <BEEP> or <Bnt> commands sends to printer. It refers to ESC B count lenght command.

What @QMcKay suggests should work however he somehow used our old XCT syntax. Try this.

Actually in the past, I tried <BEEP> but it either didn’t work or it may have been I wanted more control over how it beeped.

I wanted more control over how it beeped.

In this case what you need is <Bxy> command. I’m surprised ESC B command never mentioned in EPSON documents. I can’t remember where it is coming from but as far as I know it works fine for Chinese printers.

as far as I know it works fine for Chinese printers

This is not a serious problem for SambaPOS people

What @QMcKay suggests should work however he somehow used our old XCT syntax.

OMG, how did I do that??? I edited all my posts to make corrections… thanks @emre!