I followed the tutorial for Basic Automation Tutorial Video for Simple Fast Cash Buttons [HD with Voiceover]: Something that I hadn’t thought about, but I said I would implement after viewing the very informative video.

I’m having an problem and I cant seem to get to the bottom of it
I have Ticket creation set to select entity.

Animation.gif1345×620 358 KB
When I use Exact Cash It returns me to the Entity Screen as expected but when I use any fast cash buttons with values ie. 5,10,15,20 Cash It brings me back to an empty ticket that cannot be closed without first adding a product.
Using the rule debugger I found that there is an application screen change that switches it back to the ticket but I cant seem to find what is causing it. 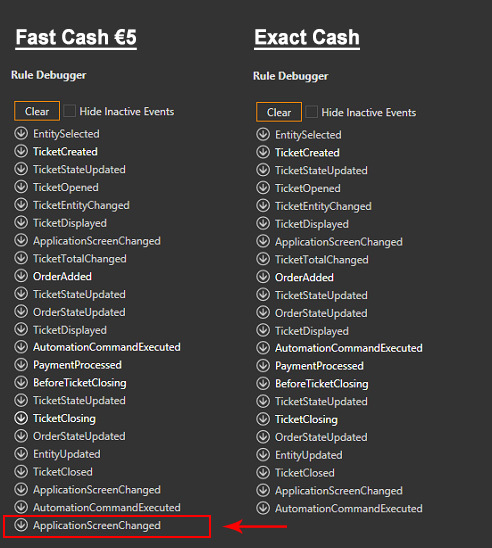 Hmmm interesting.
I think it could be connected with your ask question I think as the ticket and that the closing of ticket tried to go back to entity screen but the ask question if trying to take to pos screen.
Can you temporarily disable the ask question for print and see if that still leaves the issue.
If you add a action constraint on the action of ‘1’==‘2’ you can disable without removing if it’s not in its own rule where mapping would be alternative way to disable?

the only difference between them is the value on the button, so as alternative method try not having the value on the command buttons and create an action per button via seperate rule or action constraint and set values in the amount/tendered of 5/10/20 in the corasponding actions in place of [:CommandValue]

Yes that is the first thing I tried but they have no effect on this (there is also one for change due but did not show in .gif as there is was no change)

I did notice on thing that I thought was strange. When I use Fast Cash €5 (top half debugger) The default “Update Available Entity Color” Rule executes but it doesn’t when I use Exact Cash (Bottom half debugger) 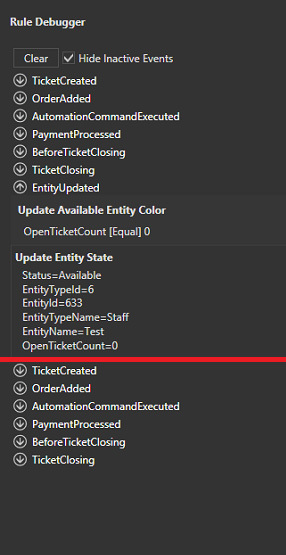 Did you try changing the [:CommandValue] to a number as above and take the value out of the automation command?
Just put 5 for now to see if they the command value as if you don’t have select entity as default you would see the command value list under the popup.

Did you try changing the [:CommandValue] to a number as above and take the value out of the automation command?

Thank You! I hate asking on the forum but I have been staring at this all night and could not figure it out.

Any idea why the automation commands having values cause the extra Navigation?

Any idea why the automation commands having values cause the extra Navigation?

I think it will be connected to the command value prompt which you can see behind the ask question if you have create ticket as default rather than select entity.
Have seen similar effect with logout where automation triggers logout while a ask question is up and after the ask question it tried to go back in to POS and you end up on POS with no username.

Although I am struggling to replicate…

@silentbob saying there… where is your close ticket action?

Its in the Payment Processed Rule

Probably not the best place for it, at least not directly.

Sure this is related to the user issue I described.
You would be better to have it triggered by an execute automation command action triggering it it its own rule and set the command action to be background = true.
That option means it waits for all other processes to Finnish before running.

ns it waits for all other processes to Finnish before running.

Tried that too by modifying the rule and automation command “Setup Fast Payment Buttons” configuration task with the same result.

Will try and find time to import you zip and test but pretty sure it would solve, it’s due to the user interaction being after the ticket has closed…
Will check and show the solution.
This may come up in the future as setup gets more complex with things happening at all stages of the workflow.

Sorry the Execute automation Command action from the Configuration Task did not have anything in the Background field. Setting this to Background = TRUE makes this work.

Thanks for your help.

Sorry the Execute automation Command action from the Configuration Task did not have anything in the Background field. Setting this to Background = TRUE makes this work.

Yes most people wont need that setting but for your specific setup you did. The configuration task is just a basic setup so it makes sense it does not include that setting. Glad you figured it out.

I had it working fine. Its just when I seen JRTechs video I thought I would try streamline my setup and reduce the number of different rules, passing the values from the automation command is what brought up the issues.

I suspect its related to the issues I described above.
Emire commented on the command value showing under the ask question on my video and said had made some refinements to improve that, wether or not that would clean this up or not only time will tell with next update.

The vedict is its related to user interaction causing the screenshange over the top of the ticket closing, As I said I had similar issue with logout action which would flick back to POS when it tried to logout without a user.
The background command action is a good tool for senarios like this, you have to remember there are allot of rules and actions happening expecially arround clost ticket and understndabily the correct place to put actions sometimes can be tricky.

I am hoping that the amendment emre made might resolve this instance of the issue.