Fixed number of buttons per screen?

I have read some posts where people were looking for a fixed number of buttons per menu screen. As opposed to too many on one screen, or buttons evenly spread out over multiple screens. For example, limit screen to 9 items, then make a new page for additional items. It seems that in V4, this was not possible. I just wanted to make sure that this is still not an option in V5, and that I am not missing something.

Yeah, you can do this in V5 - in the Menu Editor, select the category then Edit Category. Under Menu Properties, enter a value for Page Count > 1. 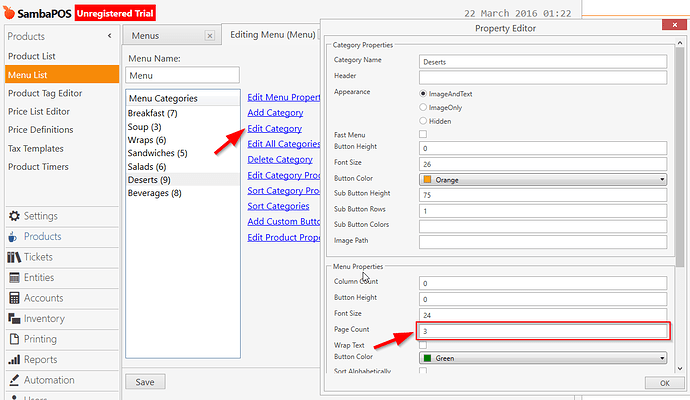 Here is the result:

UPDATE: This also works in V4: 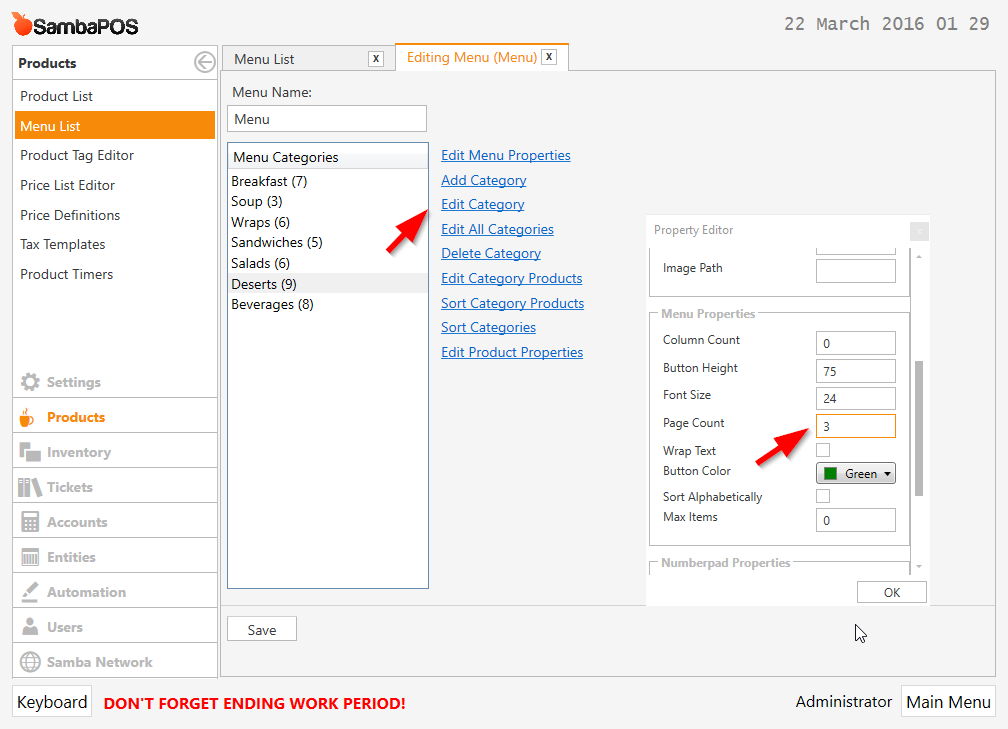 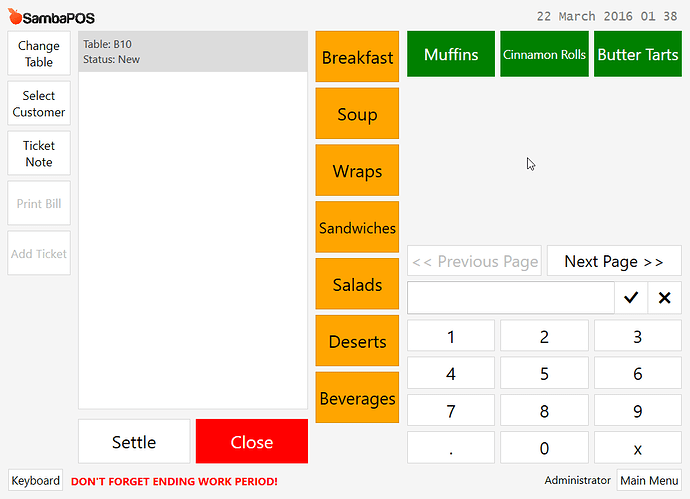 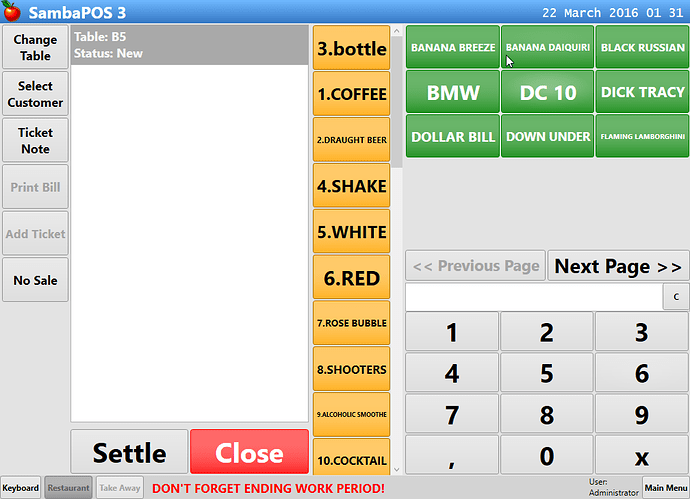 Thanks, that’s not exactly what I was looking for. I know you can add more pages, but I am looking to have a SET number of buttons on a page. Otherwise, if you only have 4 buttons, it spreads them out across a few pages. It is not ideal to have too many buttons on one page, and also not too few. I would like to set a number of button (like 9) where if there are 15 buttons, 9 are on the first page and 6 on the next. Keeping the button size set from one page to the next.

@tommymsw this has been mentioned before by myself in that pages should only populate fist page before filling second etc however this would only work with a fixed columns and button height as the default layout in v5 uses 0 or fill screen this then becomes problematic with pages as what is the number of buttons per page.
Also button height is circumstantial to screen size as the option is button height rather than number of rows.

I too would find pages more useful if the option filled first page before populating second rather than evenly distributing.

My though on it would be that that maybe a better way to handle this would have been that page propagation became automatic once the height of the screen was filled if you manually set a button height however currently this results in scrolling rather than pages. Although I personally believe scrolling is not an ideal interface for most POS systems as allot of touch/pos hardware is not overly smooth when it comes to scrolling this is obviously something which is allot better in newer hardware.

Actually there is a Max Items property as well, I thought it might do what you are looking for but I can’t get it to work. Any idea how it’s supposed to work? 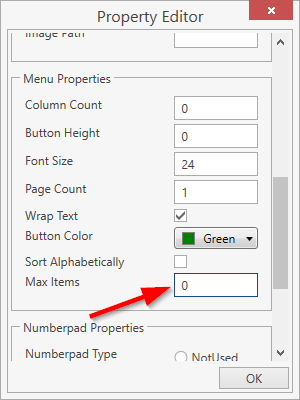 There is this other topic that mentions it but there is no real answer other than we can’t use this for sub menu?

Hey guys, I ran into a problem tonight. We’re adding a bunch of items to a category and giving them sub menu tags. In the sub menu we don’t want a scroll bar so we set pages to 2 and max items to 15. … The problem … When doing this it display 15 of the first category items on the main page and all of the items on the sub menu just like before. I checked all the settings and it seems like this should work. Any ideas…? I’m on my phone right now and I can add pictures lately. Basically the max i…

@markjw its not a max orders added option is it?

I love that the buttons resize… But that is only great “sometimes”? But maybe a good solution would be “button width” rather than “button height”? Or better yet height and width? So you can set them to the desired size for your screen? I bet it would require a bit of change to the program, but maybe in the future. For the time being, I am going to deal with the “too many buttons” on some pages, to avoid the “too few” when you set up pages. I feel as if the “too few” will slow things down a bit, while the “too many” will just take a few times for the employees to remember the correct buttons.

“button width” rather than “button height”

Sorry, this would not be better number of rows to go with number of columns would be better if being changed. Or preferably that 0 button height and setting rows would be auto height to that number of rows given screen size.
Specifying button width is counterproductive I would say as why would you want to specify a width less than what you have, although you could say the same for height.
I specify height to get product buttons to match the height of my category buttons.

Button width is based on filling the area depending on the value of the Column Count that you specify. 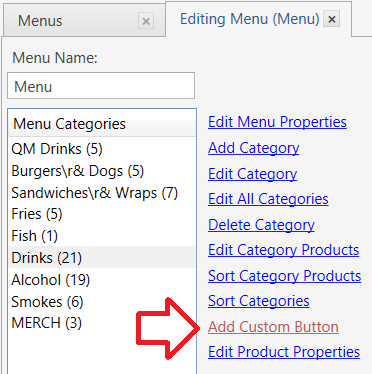 This shows where the spacers are located… 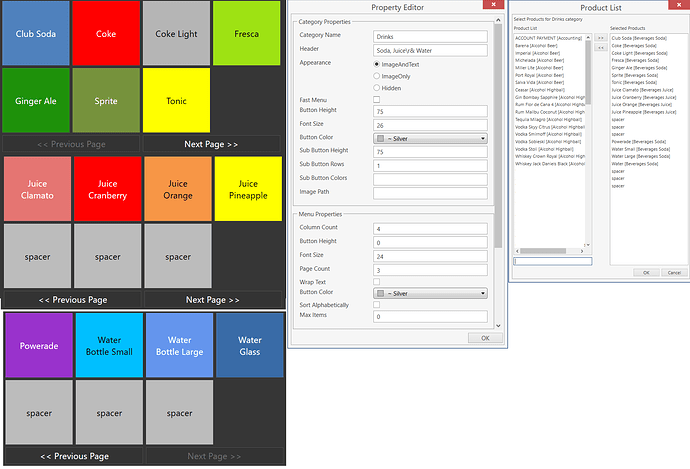 And now with the spacers hidden from view… 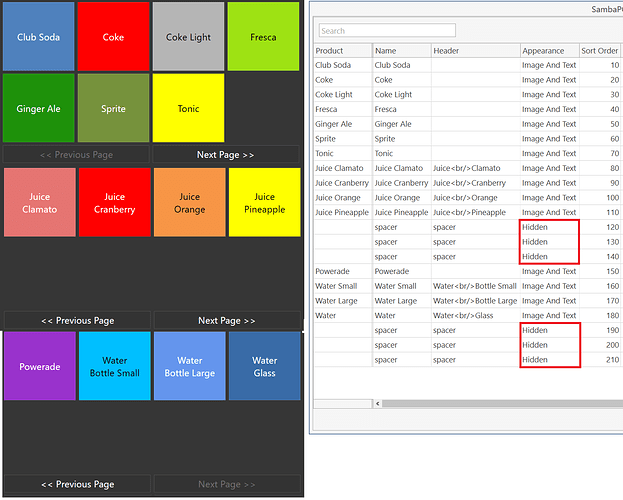 And moving the spacers to different places to create chaos… 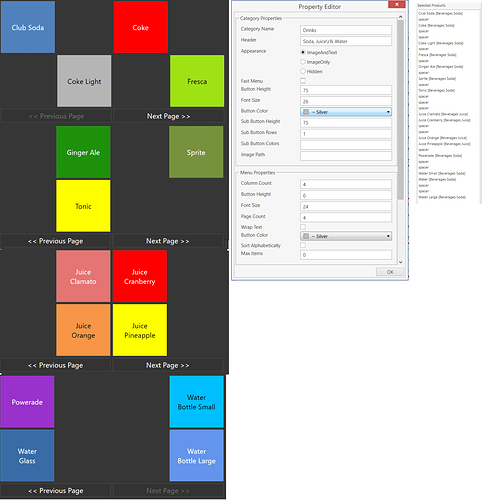 nice to see an idea get implimented and used

This would push more products to the 1st page but isnt ideal.
A better ‘pagination’ model is required I think.

Yea, I messed with that a bit, but it still spreads a few buttons across multiple pages once you tell it to use pages. Plus, you have to add and remove the invisible buttons when you add or delete more items. I still use it on a few pages though.

I do think that a lot of people would like the ability to skin, re-size, color and position absolutely everything within SambaPOS (including me), similar to how we can do Custom layouts in Entity Screens. This is called “flexibilty” and you can “roll your own” POS by having access to such customization.

Then on the other side of the fence we often see people with comments like “why do I need to do this or that - why is that not automatic? I think it should come ready to go out of the box so I don’t need to do anything. Why is that feature left out? It is sooo basic and all POSes have that! Where is the manual to work this thing, it makes no sense to me at all!”

In this particular case, I suppose it would be nice to have finer control over the Menu, but I have learned to live with it and I actually like the way it works, so yah, there be my 2 cents on that… it just isn’t a priority for me. In fact, I am partly ashamed at myself for wasting precious time playing around with spacers and pagination and putting together a bunch of screenshots for something I don’t even really care about in the first place, when I could have been getting real work done!

P.S. @tommymsw sorry for the hijack, just had to get something off my chest.

“why do I need to do this or that - why is that not automatic? I think it should come ready to go out of the box so I don’t need to do anything. Why is that feature left out? It is sooo basic and all POSes have that! Where is the manual to work this thing, it makes no sense to me at all!”

LOL that makes me chuckle, although have been guilty of making the ‘other POS’ comparison before (but at least it was a feature idea and got it to do it in the end with automation anyway

It is sooo basic and all POSes have that!

That one annoys me allot, YOU HAVEN’T YOU EVEN TRIED!!! LOL

it just isn’t a priority for me.

Thats the key part, would it be good to have more control… ofcourse but more interested in the next exciting feature myself and there are other bigger things to be done

All that said, it never hurts to ask for a feature, but the involvement required depends on the feature requested. And you never know - maybe we can already do something being asked for, but it is difficult to know without asking in the first place.

Just not long ago, I asked for more Task Type features. In the end it came down to this:

General preference was option 1. V5 works very well as-is, and V6 will be revolutionary, so get to work on V6 ASAP.

I am sure there will be some small features implemented alongside bugfixes for a little while to come, but Menu Customization probably isn’t one of them.

Many are clamoring for Online-integration, and while V5 can do some of that with success, it won’t really be an event-driven reality until V6 because it requires a re-think and large breaking infrastructural changes. Given that people want this integration, it becomes a bigger priority, so V6 is probably where the most focus should be at this point.

Personally, in my Market Area, I probably won’t be using Online Sales any time soon, so I don’t really have a need for it, nor even a want, but I am very interested to see what @emre comes up with next. Mainly because along with “online” there will be a slew of other new features that I could never dream of, that I never knew I wanted or needed in the first place, that I won’t be able to live without once I see them.

Great points @QMcKay sometimes things need to be said to put other things in perspective.

It just occurred to me, but “Order Tags” are already set up this way. With “column count”, you cat a set number of buttons per row. Not sure if this will automatically make a new page or not though.

It just occurred to me, but “Order Tags” are already set up this way. With “column count”, you cat a set number of buttons per row. Not sure if this will automatically make a new page or not though.

Oh… That actually almost solves the problem. Although I am guessing if you set the column count to like 3. it puts a scroll bar, rather than a new page button. Maybe if whatever brings up the scroll bar, brings up a new page? I am sure others feel differently, but I find a thin scroll bar to be really difficult on a touch screen. Some smart phone apps just have a circle with an up or down arrow appear. Then your finger fits.