I will be building a system with 3 POS terminals. I understand that I can build a server and 3 terminals, or one server/terminal and 2 additional terminals.

What I would like to build is a Server and then 3 Standalone terminals. I use to work in the POS industry about 20 years ago, with leased lines and so on. Each each terminal had its own database, the server inside the store would poll each terminal and then the home office would poll each store’s server. This way there really wasn’t a single point of failure.

I would like each terminal to have a start/stop work period (I know this will work as it does today).

What I don’t full understand is can I merge the databases from each terminal into a server SambaPOS system though out the day, or even only after the work period for that terminal.

My concern is that if the server SambaPOS had a hardware failure, (drive, systemboard, memory…) then my whole store POS is dead. Or did I miss something when only using 1 SambaPOS server?

I beleive what your asking is not possible to an extent however… I have noticed an action called. Change Database Connection and Execute Database Task. So you could setup a system of automatic backups… have a separate database running on each terminal … but they would be linked to the main server database unless a failure… it could then switch to the local database and load a backup and keep operating until your server database is back up.

Basically save the backups on drive separate from the server… maybe a NAS or something.

That would give you a redundant system. Its something I may be interested in trying myself… But like I said I have not attempted it … just looking at the actions it looks like it may be possible.

I dont know if that is possible but it seems like it should be.

Your idea sounds good for consolidating branch data on a central server and we have plans to develop a similar server based solution. However inside a venue most people will prefer to access whole data from all local terminals immediately.

On the other hand I’m not sure if SambaPOS should be responsible from recovering server failures. SQL Server already have great automatic backup/recover/replicate features to handle such server issues.

@emre, I think the centralized data with the help of SambaPOS would be great. For menu/product list/promotion/happy hour settings etc. can be done on the central server then push down to every client terminal. So if you want to change a price of one item, it can be done just on the server.

Then when it comes to the sales transactions, we can let it saves locally then sync back to the central server. I think this way, everyone is happy in order to avoid hardware or network failure.

This is why I like SambaPOS over the free Square Register. I understand that everything wants to move to the cloud, but stuff like Square its all stored on the cloud. With SambaPOS I can select if I want it on the cloud.

@emre I have set up replication on MySQL I will have to look into MS SQL to see how replication works and if the terminals will fall over to a backup server if the main server fails.

And I agree SambaPOS should not be responsible for the fail over other than we can quickly switch if a piece of hardware fails. Automated would be nice but not required if the manager can make the decision to switch to the backup server.

At the end of the day its all about getting that money from that customer that wants to give it to you.

This button creates a backup, compresses it, and copies the file to my NAS. It is on-demand, using Start Process to execute a BAT file.

The backup also occurs automatically on Workperiod Ended, and could optionally be put on a timer (Trigger) to execute several times per day, or even at the end of each Sale if you really wanted to get crazy. 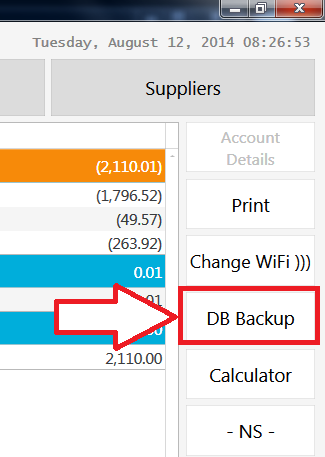