No i didnt, i just have now but cant see where it has installed or what to do next?

Close down the SambaPOS application completely and re-launch. This will enable the Shell Subtitle feature. You can then go back into the Samba Market and see if it states ‘Installed’.

Emre kindly created a test database which illustrates this feature, see his post.

As he mentions in his post remember to check how his implemented the Automation Commands, Pay Ticket Action and Payment Processed Rule.

Once installed in Samba Market, you then need to create a action: 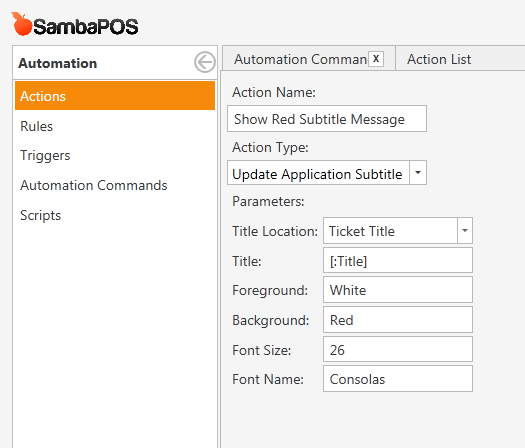 Then you need to create a Rule: 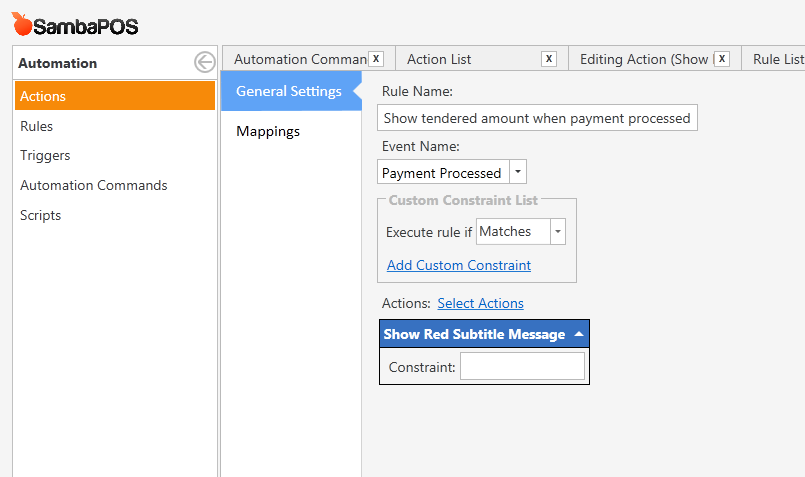 Ensure you add mapping to your rule:

Hi thanks for that, ive followed Emre’s guide but it still doesnt work, however ive decided to use fast payment buttons that take payment and close the ticket then show a message box with the change due. Ive set the payment buttons up but I cant seem to get the message box to appear to show the change. Ive tried the equation set up by John S:

but this displays the message box but the equation doesnt work

as im using this instead the red banner wouldnt appear as ive set the fast payment buttons to close the ticket after payment is made, do you have any suggestions for why my change box doesnt display the change due value?

Hi Guys, I’m having problems, I’ve got this far but I can’t get the message to appear, is there something missing from these instructions because I’m stumped !

Hi Agin, I can’t see in the instructions anywhere where a ‘Last Sale Rule’ has been created, if I create one what settings does it need ?

Which message were you struggling with? The change message?

Hello @helitrooper. While posting 11 months old topic it will be better to give some information about your context otherwise we should read 64 posts from beginning just to understand what you’re talking about.

Hi Emre, apologies for being a little vague, I’m trying to set up faster payment buttons and have followed all the earlier instructions, I have no problem setting up the buttons and I was following all the actions & rules shown in the earlier posts above but I cannot get them to do anything, furthermore since trying to set them up the ‘halfpint’ button that I had set up and got working has since stopped working again, in my frustration I have deleted everything thatI put in and will have another go tomorrow a little earlier in the day when my mind is functioning better

It would be useful to see some screen shots of your related actions and rules.

It would be better not to be able to press the 5.00 button if the sale value is higher than that amount, otherwise we could end up giving that minus sum back as change.

You need to constrain the rules.

Example on the 5 button would be to set constraint of ‘ticket total’ or ‘remaining balance’ to less than 5.01 (ie 5 or less)

I don’t know how to change the rule

We also don’t know. How did you set it up?

I’ve browsed previous posts to get an idea but multiple implementations discussed here and I’m not sure which one you’ve preferred.

Hi Emre, I went all the way back to post 8 and followed JohnS’ and it works ok, but does not stop me from getting a minus figure for change, if there is an alternative way or you can tell me how to add the necessary constraint to the command button to stop it being pressed when it is less than the ticket total I will be glad of your assistance, this is a fantastic pos system with many options and my programming experience is very limited but I’m getting there gradually.

OK great. When that post was written Pay Ticket action didn’t have tendered amount parameter. John tried to compile a quick solution until we implement that but if you keep reading because of similar issues to your’s I’ve quickly implemented that parameter and I’ve demonstrated different solution. You can find the sample database on this topic.

Also if you search forums there are a lot of topics that demonstrates similar setup in detail.

i want to be able to press the fast cash button eg $5, ticket is paid, ticket is automatically closed then the change due message box to appear so that when I press OK to confirm change has been given out the POS then automatically logs out. where do i start ?

Hello I was following the tutorial form emre and JohnS on http://forum.sambapos.com/t/get-fast-payment-buttons-help-setting-values/552/7 For some reason I can only get the $10 button to work I have added $20 and it still displays $20. Also the Change Message is not showing. Here are my config [image] [image] [image] [image]