ha ha, thanks Emre nice one.

That will fix it.

@JohnS and @Isaac thank you very much helping me on this nice feature. That was real Fun! While you were talking about it I’ve made changes. I’ve uploaded new version.

John how we going to do what Emre just said?

This is my test database http://sambapos.com/?wpfb_dl=14

Thanks for attaching your test database, I now have this working as expected and tendered amounts are now displayed. Is it possible to set the change due to 2 decimal points. so instead of displaying 4 it would look better if it displayed 4.00? see pic: 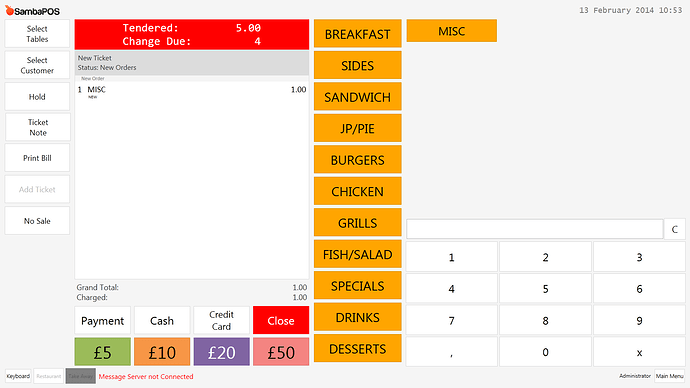 Use this for Tendered Amount

Unfortunately this did not work:

I think you want to format change due instead of tendered amount. 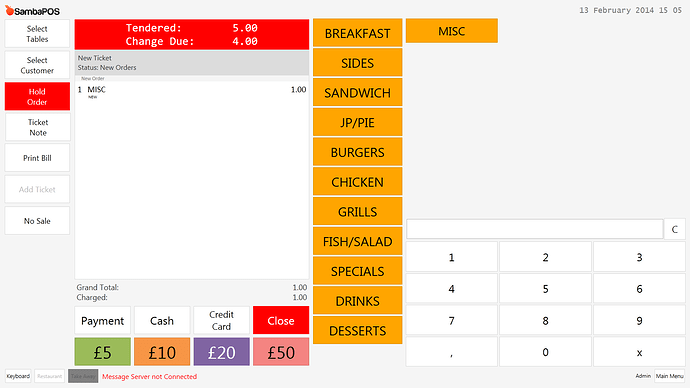 Big Thank you to JohnS as well.

You may be right Isaac

Guys I think we missed adding some actions to the rules regarding Ticket States. Because any ticket settled as Fast Payment is currently not updating the Ticket Status: 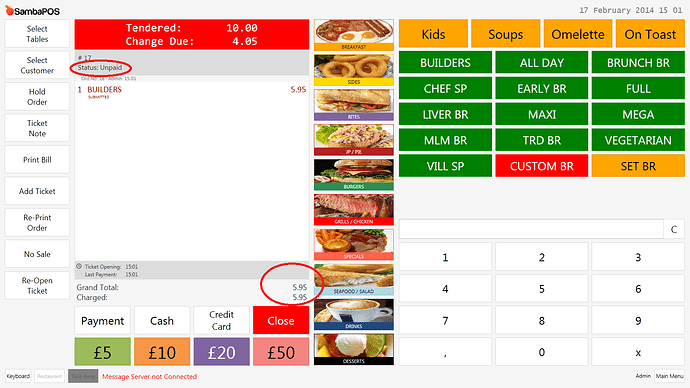 You need to refresh the ticket after payment.

Yes I did John, once it was settled I closed the tickets and re-opened it from the ticket module. I’m just trying to figure out what actions I need to add to the rules.

Settled Tickets are also shown as OPEN tickets instead of Closed?

I just tried refreshing the ticket, and the status will update but you can add more orders to the ticket.

@JohnS I now added the close ticket action to my fast payment rules. However for some reason although the tickets are settled and closed, they are appearing as OPEN in my ticket module?

In fact, any ticket created and settled in my Take Away Department, is all showing as OPEN. hmmmmmmm

Ticket Payment Check rule is responsible for closing paid tickets. Check if there is a department specific mapping for this rule.

This is not hardcoded and executed by rule because in some cases restaurants wants to keep tickets open even it gets fully paid since customer still sitting there.