Id like it to all be in the same line with 3 spaces in between
Preferable to always be in ascending order as well.

Preferable to always be in ascending order as well.

Probably easier if you dripped the P and just used numbers… THen can sort assending in report expression straight off.

Only reason i put the P was so that waitress knew that 4 actually means Position 4. I guess i can remove it.

Or put the number into state value on its own and leave the Pn in the state name?

Yeah thats fine, does state name show up in order line description tho?

its shows as StateName:StateValue if I remember corectly

If that was the case wouldn’t it show

Which is clearly not the case. Im pretty sure it just shows the values.

Anyways for now sorting isn’t my main concern. I just want it all to show in same line. Do you think that might be possible?

If that was the case wouldn’t it show

Which is clearly not the case. Im pretty sure it just shows the values.

No, there is State (Status), State Name (New) with no state value,
Yours would be;

Okay I did that. I got it working including the report. Now just need to get it to all show in one line.

Probably an easier way but definatly doable with a bit of Jscript, see if kendash, q or emre come back with a way on rendering report inline…

The ideal would be more power in order state formatting to include {expressions}.
This would be useful…
For one you could seperate portions like on receipts in place of the full stop by default which is like to do.
It would also be good for my planned specials setup which would be order tags otherwise but this would be more effective.
I’m sure this has been discussed before but can’t remember why we can’t, unless it was done but on the beta version…

i am in beta. This is working fine for me, I just hope I can figure out a way to fix this formatting.

@QMcKay would you happen to have any ideas on a way to format this report string so that the ticket tag shows all positions in the same line? Also would be great if I could add like 3 spaces between each value. 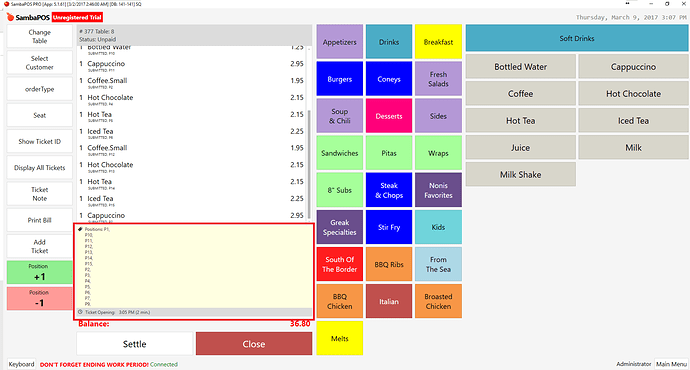 I am just guessing. It is really hard to tell without knowing the exact output of the Report Tag. But basically, there are line-feeds in the output that you want to strip out.

And since JScript .replace() method will only act on first occurrence of a match when you use a string like '<!rn>', you instead need to use a Regex like /.../g to “global” replace of all matches.

Greatest respect to you for all your continuous help.

Ill try it soon as I can

The first one worked great, thanks.

Okay I got my position setup working perfectly.

Only 2 minor complications that need @emre attention if you ever find the time.

order state formatting to include {expressions}.

Tag processing speed improved after that request originally posted so I added Printing Tag support for next .61 update. [image] It displays Turkish labels under product name. [image] That works only for Display Format and you need to use Double braces not to infer with {0} formatting. If you use {PRODUCT NAME} instead of {0} you can use single braces.

New tickets do not get a ticket id until you close them.

Are you saying that I can change the format of states in order line?