How to Buy modules from Samba Market

@sohaibbismal your modules seems activated and should work fine. Can you check again?

@emre i bought database tools and back up modules and activated it on my desktop which is now live at the shop. i wanted to update it using my laptop here at home so i decided to export the files and plan to import them on my laptop. i cant import them because my laptop doesnt have the modules so i decided to buy a new one. but i cant buy again nhere is what i mean

i cant also see the activate button on the samba i installed on my laptop. 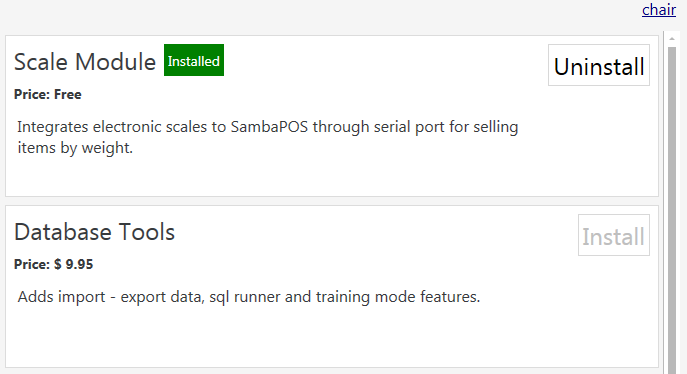 Try Install the same database backup from your production db to your laptop.

It is attached to your database not your laptop. Install the same database that is in your production on your laptop by loading a backup. Connect samba to it and then reload samba.

@kendash can you point me how to do it i have the backup and the txt file with me which cam from the desktop. i was able to do it because the modules are installed on the desktop. i do not know how to open them using my laptop thats why i wanted to buy another copy of the module so i can import the database and the txt file on my laptop. but as you can see i cant buy a new copy

Oh your using CE edition. Well that is easy, just put the .sdf file inside your mydocuments\SambaPOS4\ folder and then reload SambaPOS.

thank you ill do it right now

I recommend migrating to SQL EXpress or atleast localsql install… CE is missing some indexing features and is just not as efficient.

may i also tell you that i am using a version which i just downloaded today. im not sure if the menu layout from the desktop will be the same as the layout on my laptop

version upgrades would not have anything to do with menu’s You can upgrade SambaPOS versions anytime without it impacting your setup. YOu should always run a backup before just in case… but it would not affect your setup.

can i upgrade the version on my laptop before i use the database from my desktop.

The menu is different because you have not loaded your database into laptop yet… of course it will be different. All of that is stored in the database… not the install… even menu design. 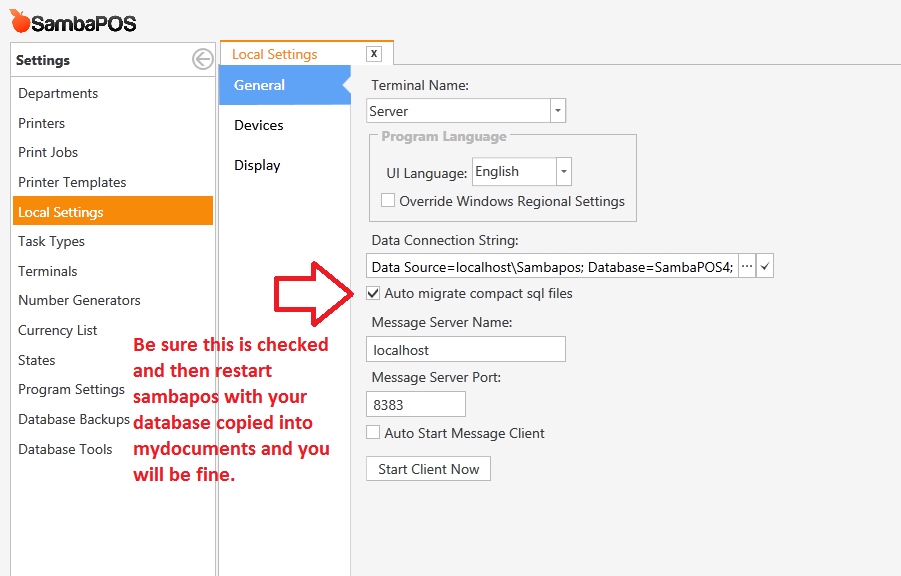 small correction from what screenshot says… it would be mydocuments\SambaPOS4\ folder not just mydocuments… I already mentioned this earlier I just wanted to clear up any confusion.

oh i see. in short all i have to do is to put the .sdf file inside mydocuments\SambaPOS4\ folder and then reload SambaPOS and i dont need to buy a new module. and afterwards ill just do the same to my desktop

yes but like I said you should probably look into upgrading it to SQL EXpress or atleast the LocalSQL install. CE is just not very efficient.

yes i will do that after this task. then ill upgrade the version and use localsql, which version best for newbie is it the 4.1.55 or the 4.1.61

You should always update to newest version. The core of the program stays the same. Features will not disappear or break or change in how they are used. Upgrading gets you bug fixes, and enhanced features not changed features. So version does not have any bearing on if its easier to use or not.

just to be sure i underlined the file which i will copy from my desktop and then paste it on my laptop right?