How to make a template for each till to have a separate report?

I need to know how to make three templates for custom reports for three separate tills. I would also like an overall report for the server.

You mean you want to break down the work period report to show tills separately?
You may be able to do with custom reports and some additional tagging/states, alternative method might be using department/ticket type per till - but would need to check if the breakdown is what your after.

More information as what your wanting to report would help.

Also you can use {:CURRENTTERMINAL} tag to filter report by terminal displaying the report. As @JTRTech said we can suggest more if you give more information about your need.

@emre @JTRTech sorry about the long delay for my response.

I still haven’t successfully made a report template, but what I need is a template for three tills to have their own reports. I need all three reports to show each user and what they have sold and how much money they have brought in. for example: Staff 1= 43% food, 10% drinks, Profit $; staff 2= 15% food, 55% drinks Profit $.

I also need the till reports to give out the same type of report, so I need each individual till to tell me how much they earn how much percentage has been spent on food and drinks.

This is so it can be shown to the accountants what is being made and all that.
Thanks.

Not that im questioning your motive but why would you need to break it down on a per till basis for the accountant, surly they are only bother by how much you take not which till?

@JTRTech These are not my accountants. I am part of a IT company who has been using/ leaning from this SAMBA system for our clients who have a set features in which we have to meet and the system is everything they want and need. Just I am still learning things about this software which I did not know existed.

I still haven’t successfully made a report template …

So what you’ve implemented so far? Show us your report template so we can understand both your intention and show your mistakes. Descriptions like “money brought in, how much they earn” can have multiple meanings.

I can’t seem to understand the method of making a report. I have gone through your tutorials multiple times and still don’t understand them.

I just need a report which will split the tills, so we can see the individual tills incomes. as well as what percentage of what each till is selling.

Can you show us what you have so far?

@kendash I have not got a template no more, I keep making one then changing/ delete it when it doesn’t work I was hoping there would be a template which can be used, I could probably understand it more then, but there seems to be no reports relating to the type I want.

If you would show us what you have we can help point out mistakes. There are numerous example reports all over the forum.

This is the template I am trying to modify from, so instead of users being there I want the terminal names/ the till. Even this template is not working for me correctly.

Error which pops up when I try and use this as a test. 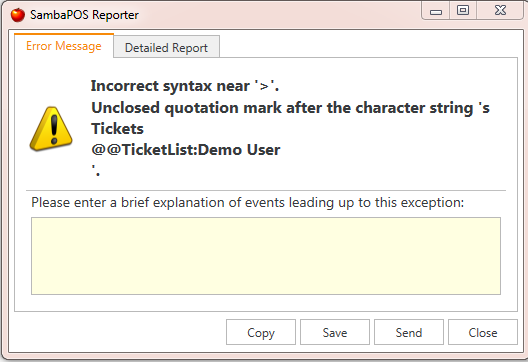 Show your SQL scripts as well please. You have a ’ after demo user which is bad syntax

Well I was using this tutorial for the SQL stuff, www.sambapos.com/wiki/doku.php?id=creating_custom_reports_with_sql
So I don’t Think I have a SQL script.

Those are calling a SQL script so if you have no script it will do nothing. Did you read the report syntax page I linked you? It explains report tags which is much simpler than using SQL.

If so that is what I showed you earlier

You have not shown any SQL scripts.

That is where I have gone wrong. If that is not a script then I dont even know where to start on a SQL script, I followed that tutorial and it hasn’t made sense from the start. I know SQL is very hard to understand you you guys make it seem a lot easier than it actually is. which I appreciate so much.

The link I gave you earlier shows how to use report tags which are much simpler than SQL you should look at it.

The tutorial you linked is well written and very explanatory. However for someone new I recommend using report tags and not SQL