Does this support Flash? It says it does not when it initially tries to load a flash site, however when you click the Get Flash button it brings up the flash webpage and says its already enabled and if you test it … it works.

Until we get integrated time clock and scheduling with SambaPOS i have a open source package that runs off my own web server that I want to load on a custom view screen. It is built in php however the login screen is flash.

EDIT: it seems it does support flash but not Adobe Flex. 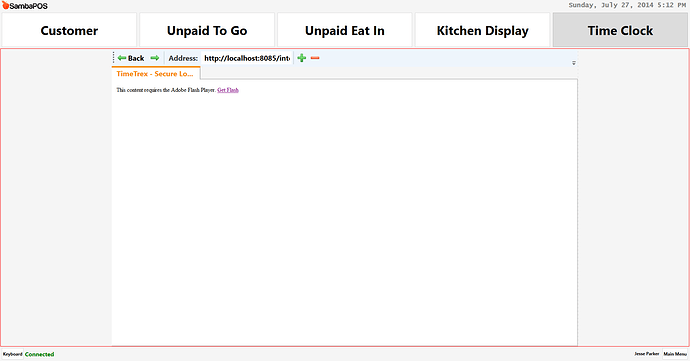 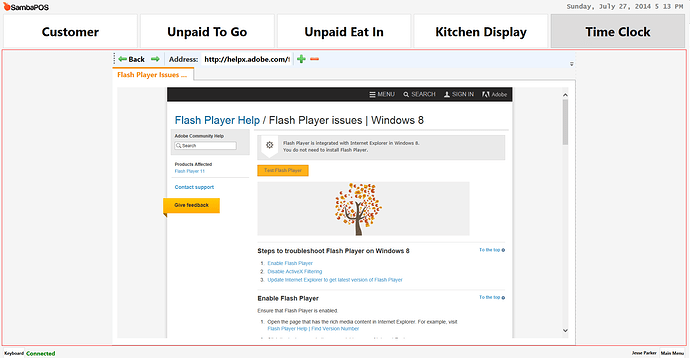 If I can get this to work. I was hoping I could figure out a way to make it load the time clock screen on sign in before anything else loads. I think with rules etc I can do that. I just need the widget to load the flash login page.

On your second screen shot it seems like flash works fine. Did you tested with other websites that uses flash?

Thats where it gets wierd… I did test it… it seems to work but its broken… i loaded an all flash website http://bear71.nfb.ca/#/bear71

It constantly refreshes and never actually loads the website

yet http://www.intel.com/museumofme/en_US/r/index.htm works fine. So it looks like it might be having trouble loading flash from my local instance of apache… maybe I need to do more setup or something. The page works fine if i load it in my own browser but it says it needs flash when loaded from the samba screen thats the odd thing. Maybe because im linking directly to the server and port etc… ill make a redirection with normal ip see if that works.

Cannot figure it out. It is still saying it requires Flash. It must be my apache settings somehow but im not sure why because it loads fine in my browser just not from within the samba browser.

If i could find a better open source timeclock/payroll system I would. I was using a package of Apache, PostgreSQL, PHP. I got rid of the package and setup manually an Apache server, PostgreSQL db and PHP to no avail.

What I am wondering is if it has something to do with loading localhost instances of flash. It loads other flash websites ok but not my localhost implementation.

Downloading… finally… hate sites like this. This better be good. Here are the links at long last:

Now to block future spam on my email server…

That link has the complete package install that installs preconfigured apache, php, postgresql or you can download just the files in a zip and setup your servers manually.

I typically go through sourceforge when looking for open source projects can avoid alot frustration with developers trying to spam you.

I was thinking of developing my own simple Timesheet using PHP and integrating it into the same DB that SambaPOS uses (SQLEXPRESS). But as always, there isn’t much point in re-inventing the wheel if there is something good out there already.

So I’ll give this a try, and if it doesn’t suit my needs, or is much more than I need, then I still might create my own.

I am toying with it now. Its VERY comprehensive. Its a complete payroll, schedular, and time clock. So it does alot more than most people would want… But personally it seems easy to setup and the payroll function looks like it could save me money if I can configure it correctly. You can set this up to run off sqlexpress but postgresql typically is faster.

I am also wondering if flex is causing it. This package uses flex for the flash

Ok just tested it with another website built on flex and my suspicions were confirmed.
http://www.adobe.com/devnet-apps/flex/tourdeflex/web/
it causes it to say it needs flash installed as well. So it looks like the html viewer screen is not compatible with flex websites.

I noticed this for login… interface\Login_legacy.php

That works I noticed that too but they have discontinued its development. Its still in the package but its not updated. I thought even though they are not developing the legacy interface anymore maybe it had what I needed… but then I figured I really do not want to invest time or my business into something that has discontinued development.

The flex/flash interface is a lot easier to use and looks more natural for my employees.

I am not sure how you would approach making the screen compatible with flex. Might be too complicated just to get one program to work. But if its not too difficult I would like to request this.

Good news is they have an HTML5 version. I got it up and running perfectly no issues with the HTML viewer.