I try to increment a counter but I am new to variable and cannot find my way.

I create an new Entity Type where i defined a field as Sunat Number.
(Btw I have just 1 entity, it’s maybe not a good practice to create a new entity type for just 1 entity. I have just discovered Ticket tag and I think it would be more appropriate, no?)

In Action, I defined a variable:

In Rule I try to increment it

But the result is:

So I miss something … 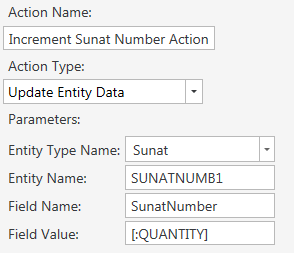 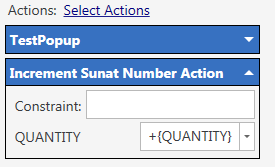 Finally I abandonned the Entity way and I went for the Ticket Tag way as explained in here and it works.

However I don’t understand everything I’ve done.

What did I do ? Did I create a program variable named “SerialNumber” ?

What did I do? Did I create a TICKET TAG name “SunatNumber”? (I did not add SunatNumber manually with “Add Ticket TAG”.)

I add these 2 actions on the Print Bill rule and now I have a number which is incremented everytime I print a ticket. I know it’s a bit weird but that’s the way the SUNAT wants to see the bills printed, avoiding the Zero Tickets (Merge table, VOID table, …)

Instead of adding incrementation to Print Bill rule you can;

Done ! Great !!! It was indeed an issue I had to deal with (making different print Bill rules) but it’s better with the constraint ! thanks.