Login with no open work period

Just doing some final tests on my setup before putting live, have just noticed when anyone logs in it goes straight to pos screen - even staff account, not sure if this was new verison change.
anyway this seems to allow tickets to be started outside of a work period???

Have hunted for a cause and it seems to be the user login rule relating to the open held ticket of switchuser setup.
Any Ideals?

Great idea @emre [image] But I still need the following, if possible: I tried WorkPeriod Ending and Before Work Period Ends Events in a Rule, checked a constraint, and tried to execute display of Ticket or Entity screen, hoping that would stop the WorkPeriod End, but alas, it did not.

You stumbled on a bug that has been exploited as a feature. This behavior has been changed in V5.

To overcome it in V4, you should store the Workperiod status as a Program Setting.

Then in Rules where you switch automatically into a screen, you should add the WPopen value as a Constraint, and block the Display Ticket if WPopen=0.

just finished doing just that, slowly getting to grips with the power of the system.

How long before v5 is expected?

What can we expect in major developments?

How long before v5 is expected?

What can we expect in major developments?

What is the ‘longevity’ (not the right word but cant think of term I want) of program settings?
ie, do they save/stay if you close samba, restart the computer?

Even with these setting just managed to login to pos outside of work period.
Not sure one the factor which lead to it, either clear database transactions on my testing install, close samba or restart computer.

Was think maybe a good change to the on login if WP=0 rule to change to maybe WP /= does not= 1 or possibly both allong with if WP setting is null .to thouraghly ensure no pos login while wp is close?

Is Local = True : means the value is held in memory, and is only valid on that particular Terminal/Computer, and that the value will be lost when SambaPOS is restarted.

Is Local = False : means he value is written to the Database, and is effectively Global (all Terminals are affected), and the value is retained even after restarts.

So in the case of setting WPopen, you should store is Globally, that is set Is Local = False. 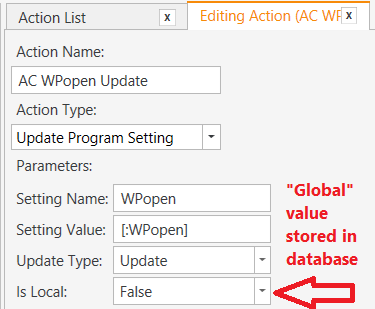 V5 has a built-in setting that makes this unnecessary. It is called {:ISCURRENTWORKPERIODOPEN} and can be used to check the status for True or False. Naturally, this is expected to be a Global value in that it would affect all Terminals.

Thanks, very helpful.
I am correct in thinking that local will only be valid for that machine also, and not local will be available to all machines?
I origionaly thought that’s what local or not ment as aposed to where it was actually stored.

Does v5 have any functionality which would make it more useable on smaller screen devices like tablet with rdp or 4-5" screened phone?
Have used on iPad, iPad mini and iphone, mini is about right for size and use ability with screen space.
You see old Ramsey installing fancie pos systems where they use iphone sized devices for taking orders but this size display would require a completly different layout to be useable on such small screen, something utilising the scroll ability of things like iphone?

Is that something that has been discussed before?

Yes, just like I stated above. Is Local = True means that it is only valid on that machine.

Does v5 have any functionality which would make it more useable on smaller screen devices like tablet with rdp or 4-5" screened phone?

Personally I cant really see how any POS would be very friendly on such a small screen. But v5 does have a couple more scaling options, however as far as the actual POS screen is concerned there is already scaling options there.

I know what your saying about the small screens, and was my thought and that’s why it’s puzzled me how they do it…
As I said if you’ve watch Ramsey’s kitchen nightmares when he puts in a pos system you see them using phone sized devices to take the orders.
Each time I see it I think I will have to have a look as to what system he has given them as system which is still efficient to use on such a small screen intrigues me as to how they have layed it out…

http://www.lavu.com/ is the POS he used. It seems very expensive but definitely looks nice.

You pay a lot of money for this system http://www.lavu.com/lavu-pricing/

looking at the restrictions etc I really cant see any reason to use it over SambaPOS. Samba is just so much better. You can scale SambaPOS to work pretty well with 5inch screens… I just don’t like using screens that small.

Lol have just found it when you posted, looking at the YouTube video tbh it doesn’t look that efficient on the small screen,
Looked like allot of scrolling through a vertical list of products.
I only ask as the convenience of a device a waitress can slip in her apron pocket over a larger tablet is a nice touch but I can’t imagine the usability ever comparing the more obvious and logical layout of the regular screen
Also ask you said is also fairly pricey.
Looking to other softwares it still astonishes me how amazing samba is for a free software and again thank those who have clearly worked so hard to put together and how as we have discussed before I wish I could contribute more.
I have thought before that I am surprised that although the core software being offered for free is a main principle of samba but justifiably there are priced addins via samba market to extended functions that as an additional offering that maybe via samba market prebuilt templates are not offered.
Obviously as they say time is money and between those like yourself, qmckay and emire have clearly dedicated very respectable amounts of time to the development and improvement of the software.
And as we all know it is very flexible and diverse in its abilities I would say that the one downside is the general suitability for the masses.
By which I mean the standard/stock install of samba is fairly basic - in feature/config set I mean. And this in turn would potentially hold back many less tech literate people from getting going.
On that line I say that the reason other paid software might be chosen by some would be that it comes ready to go.
‘In short’ what I’m getting at is that although it may go against the principle of ‘make it your own to suite’ if there were prebuilt setups available like ‘retail outlet’, ‘hospitality’, ‘takeaway’ available to download/install for a fee that more users would surly be attracted and in turn (as I presume the money from market modules does) help support those that dedicate the time and effort to develop.
In essence the software would remain free but those without the knolage/time could for the fee have a ready to go template to get them started.
I know there is a prebuilt section on the forum which tbh I’ve not looked at in much detail, but believe it is more parts to be imported via the database tools module.
Anyway I apologise if any of these comments are out of line but wanted to share my thoughts.

There are some very exciting features coming with v5. Specifically a repository of user built configurations that can be installed with prompts to customize. This repository currently is hosted on the web and SambaPOS imports it automatically you simply choose if you want to install the feature or not. If you do choose to install it will ask questions to customize it to your need.

Basically this feature will allow someone to install a custom feature like for example Fast Payment Buttons and the system will allow you to customize them how you want without ever going into rules or actions etc. Example below: 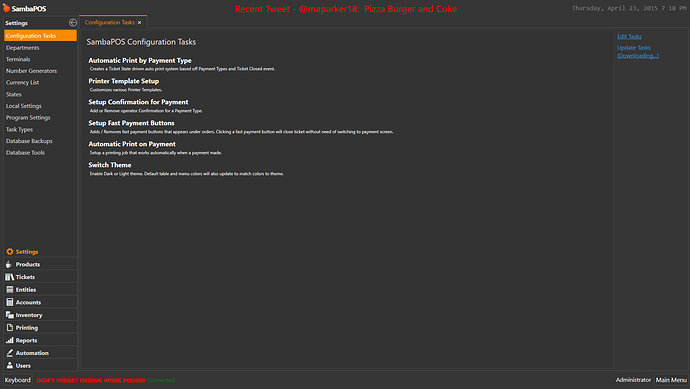 I clicked Setup fast Payment Buttons and it automatically asks me what Payment Type to use. 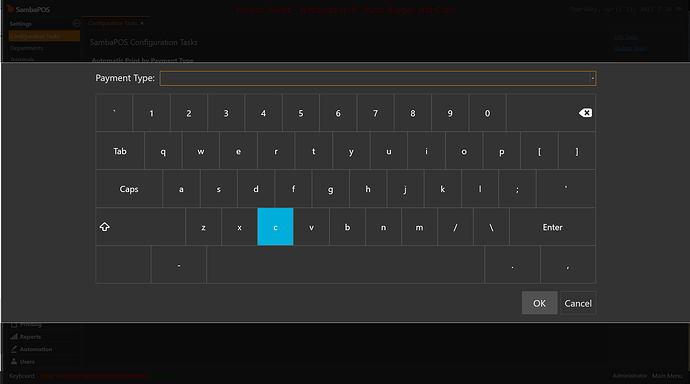 I typed Cash so it setup a Cash Fast payment button Notice its to left of Close. 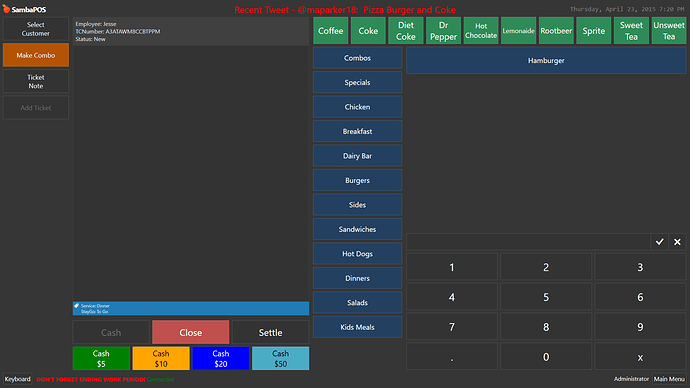 It will also remove everything if you wish. 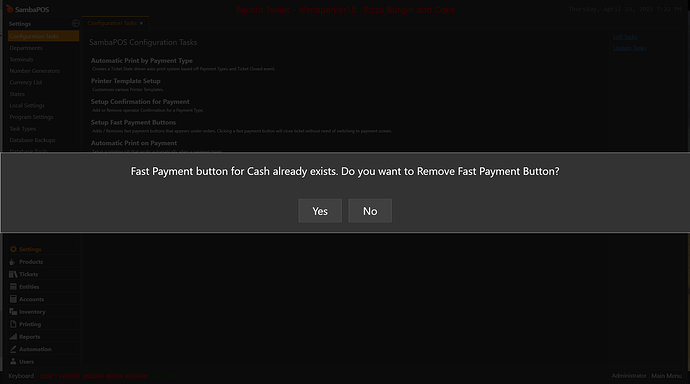 That’s a great touch, and the fact that buy the sounds of it being free still is great.
The basis of my thoughts were for example the backup module at £/$2.99 I think it is, is an absolute bargain as an adon to software where the core is free.
I mean if you begrudge paying the small amount for a very useful feature on a great software which is free you don’t deserve to use the core if that makes sence.
And that like the App Store at 79p for basic apps the average person might buy half a dozen, that the ‘average’ samba user may well pay for a preset config to save than time, thine is money and all that and as said the founders and developers deserve to have some way to compensate for their time and effort.
Paying for the convenience rather than the software itself.

Looking at your v5 screenshot, can the number pad size be changed?
That is a small thing I wish could be done if it hasn’t.
On my 17" screen the number pad seems overly large as haven’t seen a way to change.
I know you can switch to small numbers at top or turn off but prefer same layout on all pages rather than chopping and changing and some category’s end up with a fair list of products - scroll bar is not ideal.

Looking at your v5 screenshot, can the number pad size be changed?

However in v4 you can enable the small layout which puts a few buttons at top of screen instead of a full keypad. 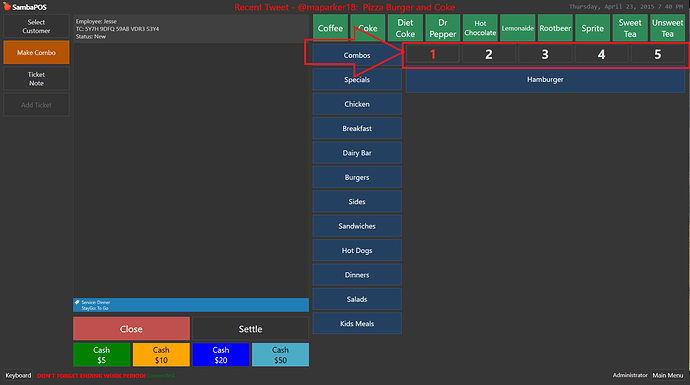 To enable this go to your Menu settings and click Edit All Categories and change numberpad value to small. 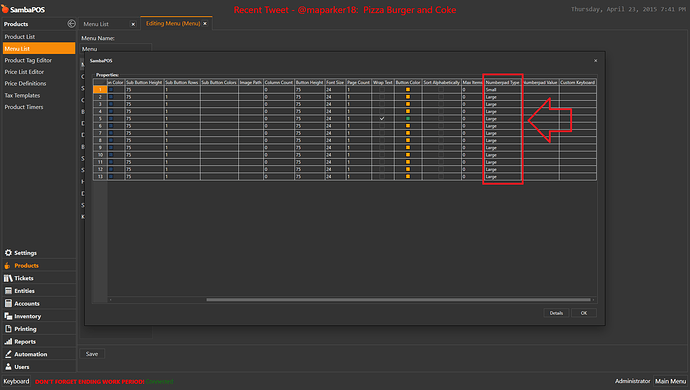 Also looking at your screenshot I see printing has it’s own section.
Printing features is something that intrigues me, can’t wait to see all the developments in v5
I know I’m fairly new to samba and the forum but how would one be invited to be part of the beta process?
I may not be a pro in the code side but am good at finding glitches and loopholes in workflows, and coming up with development ideas.
More so am looking forward to tinkering with the new features

I know I’m fairly new to samba and the forum but how would one be invited to be part of the beta process?

Everyone that is in the beta was recommended to @emre by me or @QMcKay we chose them as a group with discussion. We may add more people in near future.

More so am looking forward to tinkering with the new features

There are soooooo many new features we had to start a Features thread to keep up. In the beginning it was just @QMcKay and Myself and Emre testing it and our private thread reached over 700 replies hahaha. Needless to say we drilled out a TON of new features… Once we got it stable we invited more to the beta.