When I use mc3 app some tables when hit the first close after choose product change the number of table.
I have all settings exactly as kb.SambaPOS.com

Hello thank you for contacting us. This is not very clear. Can you show some pictures ? This is not default behavior so maybe you have some customizations we don’t know about.

From where I sent you pictures?
I don’t have any customizations.

Can you please send this pictures and/or videos directly to me (support@sambapos.com)

Good morning, I am having problems in the client that I installed 2 days ago, from the android with the mobile client 3, when they have been working for a while, when they place orders the tables are exchanged.

They place an order for table 1 from android, and it comes out that they have placed the order from table 14 for example, (the order is correct but the table is not).

What can it be, I am very stressed with this issue, when we test it less than 1 hour it goes well and then the failures start.

It doesn’t make sense for me to send you photos because that happens just when the shipment is made.

I’ll see if I can make a video in the client.

Change table is the button to move a ticket to a different table. It looks like it’s working. What do you think change table button does?

You never closed the table for the first order. You should train your staff to be sure and close the order and submit it before they start orders on a different table.

I see from your answer that you misunderstood me, I said that the waiter selected table eight and it automatically changed to table two in the second part and he had to change it back to table eight.

I watched the video but he pressed change table… not close. Close is how you send to kitchen… not change table. The first close button is ONLY to close that menu you must press close again to send to kitchen when you see the ticket screen.

Good evening, seeing that you have not seen what I was showing you, I am attaching screenshots.

it’s true that the waitress in the first order set table 2 and unconsciously pressed the move button (but it’s because they have been working all day with problems when they send to the kitchen and they discovered that when that happens, they just move it and that’s it).

It is in the second part of the video that he picks up table 8 and adds :
1 coke
1 coffee
and when he closes it, it comes out that it is table 2 (before he closes it).

Yesterday I talked to support without answer, they wrote me this morning apologizing and asking me to send the database to replicate the problem.

And so far zero response.

Thank goodness the customer is understanding.

I am very angry right now

I’m sorry, but I feel a little helpless when no one wants to listen to me, just be attentive on the second order the waitress makes.

And yes Jesse does it wrong, but he does it that way, because when they do it the right way most of the time they change the table by themselves like in the second part of the video 8 that goes from table 8 to table 2).
mc3 problem for jessee.pdf (298.1 KB)

I can see clearly change table button was pressed not close then table 2 selected but it is still in change table mode when he selects table 8. Table 2 was not closed properly.

What I’m telling you is by not closing table 2 it is in the wrong mode when he selected table 8. Please train them to press close before opening a new table.

We will add this to our cycle to look at. As we should prevent this but for now you will need to train them to use it so it doesn’t do that.

Bottom line is yes there is an issue we need to look at but until we can resolve that you have a way to prevent it through training.

It looks like we need to add some additional logic so it won’t allow you to select the same table when using change table.

Good morning, I repeat for the umpteenth time that yes, the waiter did it wrong, but the video is not the perfect example, but what I wanted you to see is the failure.

I promise to go next week and replicate the failure myself and make you a video of the exact steps, so you can see that the same thing happens.

I know that from your position you are clinging to the mistake that the waiter makes in the video (but he does it because he has been failing for 2 days) and found that the way that did not happen was that, I can not be to the waiters asking them to do my job.

I promise you that next week you will have the video with your steps and the mistake.

I just want to save time, and for you to see what was going on.

The truth is that it is frustrating to have to prove it because you don’t believe me, but I understand you.

Now the ball is in my court and next week you will have exactly the failure on video.

Thank you and excuse my insistence but it is because I do not like to fail customers, and I find that before any failure the technical support is nonexistent, I think that should be improved or just give some information.

@webcomunica I believe Jesse seen the video and seen what was happening. He advised you to speak to your team to use Close button to submit new orders instead of Change Table button.

Though I can understand your frustration, he did say they will implement some extra logic in the app to handle this scenario.

But this cant be done instantly and immediately. App will have to go through additional development and testing before new version is deployed that will handle this scenario.

e seen the video and seen what was happening. He

Why do you keep on going back to the logic of the same thing, I have told you that yes, the waiter in the video does something not logical and not correct.

I can assure you that I have seen for myself the failure.

When I have it I will send it and then I will see if you tell me about the logic again.

It seems that you do not want to listen.

I have only exposed the problem and I did not have another video, I have just talked to the waitress so that when they finish the morning of work she will make me a video exactly with the “logic” so that you can see it.

The moving of the table was simply done because it is the solution they have found while I am looking for a solution to the problem.

And now the next person to repeat the same thing that we have been talking about all the post.

I don’t know if I’m explaining it wrong because I’m using the translator.

IMPORTANT NOTICE!!! does not happen immediately, it happens when they have been working for about 1 hour.

I got the DB. I deleted the link from here. - Mehmet A.

What I am saying is that MC3 app will have to go through additional development and testing before new version of it is released with a fix for this case. Once this is done, you will be able to update from Google Playstore or Appstore.

By “logic” we mean the code base, the logic of the mobile app will have to be modified to handle this behavior of the app.

Hi
I have the same problem with the webcomunica, since I wrote to you about the problem, my customer is still changing the tables and informing the kitchen about the correct table when he finished with order.

Good afternoon, I attach new video, the waitress has already realized when the table happens, when she charges it from the app.

When you charge a table from the app, the next table that takes the order you put the name of the table before sending it to the kitchen.

In the video is the failure 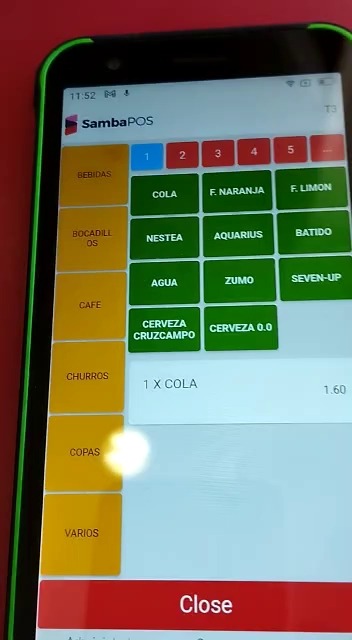 Ah thank you finally we can see what you mean. It really helps to have all of the data. This is something caused by some configurations possibly by multiple entity types. If we have your database then we are working on it.

If we haven’t responded it means we do not have a resolution for you yet. But it also doesn’t mean we are not working on it. However can you email me a copy of your database and I can look at it as well. Jesse@sambapos.com

Yes it looks like it’s something we need to fix but first we have to understand it.

In the world of development we can’t fix what we don’t understand or can’t see. It really helps for us to see it. Thank you for the videos and for sending the database to our team.

Unfortunately we cant fix something on just being told we have to see it and reproduce it. So you did the right thing sending the database.

No this is not happening on all databases. It’s something with some configurations causing it and we should discover what it is.

Yesterday I talked to support without answer, they wrote me this morning apologizing and asking me to send the database to replicate the problem.

We have not received the database yet can you please send a backup of the database to us? You can send it directly to me jesse@sambapos.com or you can private message me with it.