So i want know the SQL Express is necessary to install to server computer or not? If did not to install, the message server will working or not? Thanks a lot.

Message Server and Database are two completely separate things.
Message server is used to trigger events and refresh etc on other machines.

To run multiple terminal/database clients you NEED to use SQL Express.

Also not sure but pretty sure V5 does not support CE eddition, do you mean LocalDB SQL

and client tablet show red message “can not connect to message server”.

Sounds like you havn’t opened the firewall port, you can test by temporarily turning firewall off, if it works then its the firewall stopping it but like I said message Server is completely separate to having both running on same database.
If Samba is running on tablet and your not using SQL Express I would hazard a guess you are currently running two separate databases one on each machine.

CE is supported by version 5 however it only supports a single terminal and is not scalable. You severely limit what you can do with CE you also sacrifice performance.

To use multiple terminals you must install SQL Server either the free Express version or the paid SQL Server.

Thanks bro, I think I know how to do it now.

I know a lot of people go with CE thinking its a single file database so that means its easier! It really is not and once you get SQL installed and get familiar you will understand its much easier and you have way better control and performance over your database for the long haul.

Another reason people do CE is they think it uses less footprint on their computer… this may be true for a fresh setup but overall after you run for a while CE gets bigger and bigger and slower and slower… SQL is much more efficient.

Thanks a lot ,I thinks what should I do now,first i will install SQL express on server computer, and create database for it,seconded I will open message server and make client computer link to server message port and server database.

No need to create a database. Sambapos will do that. Unless you need to convert your CE database if that’s the case then follow the second part of the SQL tutorial I gave you.

Hello kendash. I need help.
I’m trying to make a windows tablet as a terminal.
I use sql express 2012. windows tablet running on windows 8.1
on pc, i use windows 7

do i have to install sql express on tablet too?
and after finish install sambapos both on tablet and pc,
we just have to connect to the same wifi network right?
then just use database string from pc to tablet?
is that true?
now i’m having problem on tablet, string connection problem.

Technically I would install SQL express on both, but the tablet or second terminal, I would redirect it to the address of the main PC holding the main database server.

Currently I have 2 terminals, one that has main server on it, and another which has sql on it, but the database connection string is redirected to the address of the server,

can u show me sample of your database connection string?

problem connecting on my tablet to pc. string connection problem

This the second terminal SQL Address 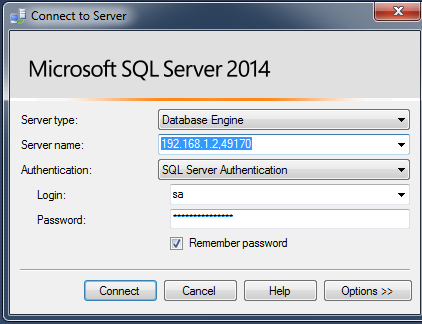 Pasted image900×212 12.4 KB
This is the main server connection string within samba from terminal 1. Since the database is local on this machine, there was no need to put an IP address.

If you however have android or iOS tablet of some sort, you may need an RDP(Remote Desktop Protocol) connection to access samba on any terminal that has samba installed.