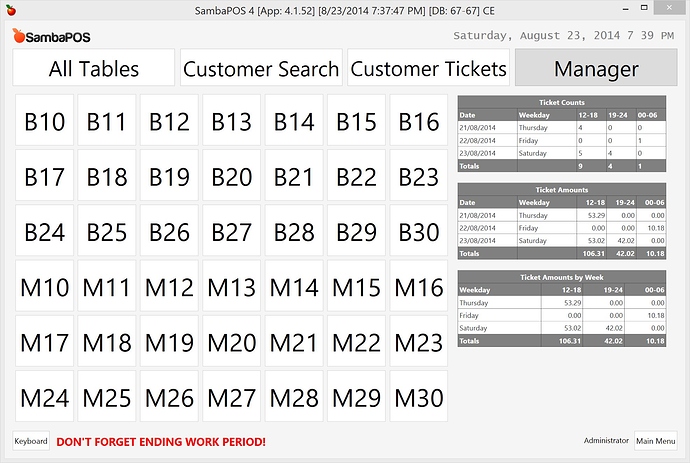 I know this is a completely different question and feel free to move it… but how in hell do you reach al the screen in a custom entity screen… I have been trying and trying and… well I think you know… I could not… LOL… I allways end with 2 columns, one in the right and one i nthe left unusable…

right click your widget… choose properties(Not Settings) resize height and width until it fills it.

I am building a traditional Accounting Screen right now that will display custom reports in a very organized fashion. This hopefully would solve a lot of confusion with people trying to use Accounts Screen as an accounting report. I believe I will wrap it into its own department so you can assign users access or restrict it while hiding it from Ticket or Kitchen views.

Quick Glance of progress! Still need to design the actual reports but I am laying out my screen now. I think I will fit 4-5 reports on it and the Black background will be replaced by a custom graphic I will make in Photoshop. I was just testing how the background looks behind the reports widget. The widget is transparent! This will look very good when I get done. 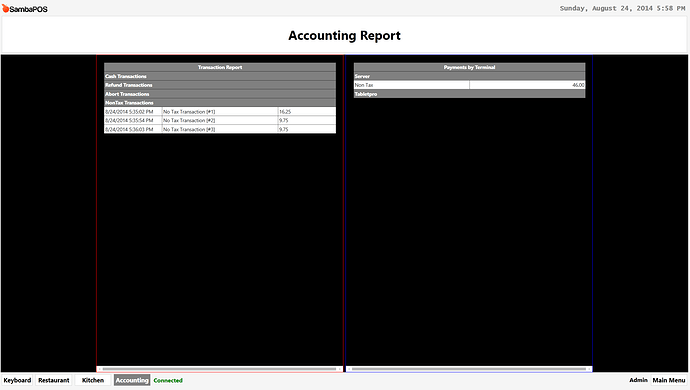 Edit… wow great idea. I think we’ll be able to prepare great manager dashboards. The best part is it will refresh as new tickets creates…

Yep it will be a live feed. VERY NICE feature. I do not think I have ever seen a live feed reports feature like this in any other POS.

Found one small bug. If you do not have a Work Period started and you select the Accounting department it will pop up a crash, but it doesn’t actually crash. You just have to close out the crash report and go start a Work Period.

Maybe you should put a validation that throws a popup saying You need to start a work period.

Found one more annoyance. I do not think it is a bug but it should definitely be looked at. Lets say you use the Custom Reports widget on a custom entity screen. If you go back into reports and edit the report and make changes to like table headers names etc. It will not update the widget unless you completely close SambaPOS and Restart. Logging out and in does not work.

First, my apologies for digging up this old thread, but this is best place to ask these questions and demonstrate the related usage and features.

@emre or @Jesse, I have a couple questions about the Report Viewer Widget.

I have 4 Reports on my Custom Entity Screen - one for each employee that details their hours and computed pay for the month. 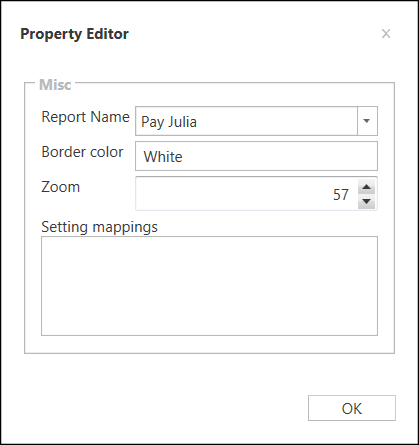 Report viewer widgets only display work period reports. I wondered why you want to do that in entity screen instead of report explorer.

Setting mappings works with grid reports and updates settings with focused report line data so we can access these values inside rules.

How can I print each of these Reports with the date filter?

Print custom report action expected to do that.

It was just an idea based on security of sensitive data.

The Manager should be able to view reports so they can reconcile end-of-day and cash out, so I want them to have access to the Reports screen.

On the other hand, Payroll should only be visible to Admins or HR because it contains sensitive data. So I figured I could build a custom screen for them, and restrict access to it. But then I got stuck on the date filter thing.

I could go at it in the opposite direction: Restrict access to the Reports screen, and build an Entity Screen with Cashout details (Z-reports etc).

Either way, using a custom Entity screens is a nice way to categorize Reports. In theory, we wouldn’t need to use the Reports screen at all… we just build a bunch of Entity screens instead.

Being able to set the date Range for viewing and printing from a custom screen would be a great feature.

How can I print each of these Reports with the date filter?

Print custom report action expected to do that.

I am aware of that, but there is no way to set the date range while printing using that action is there?

I am in favor of using navigation to specific report so when they click their button on their screen that’s only report shown. And they get full access to date selector. Navigation Module action put Reports for module and Report Name for parameter

Of course that is v5 only ATM which means its in testing.

Ahh… that would work ok @Jesse (in V5). At least for viewing and printing.

I wanted to go a little further with it though, in regard to payroll.

I was wanting to have an automation command linked to each employee that creates an account transaction when I pay the employee. The Report Explorer has no provision for automation. Entity Screens do.

Ok, anyway… so my scenarios are not possible at this time.

@emre, maybe mark this up as a feature request. We can continue the discussion later.

Setting mappings works with grid reports and updates settings with focused report line data so we can access these values inside rules.

Sorry, I don’t understand. Is there a demo of this somewhere that I can look at and read over?

I was wanting to have an automation command linked to each employee that creates an account transaction when I pay the employee. The Report Explorer has no provision for automation. Entity Screens do

No but the nav button does. I am not clear though. You wanted to put this button on the report screen right?

Correct. In fact I want 4 reports on the screen with: