You have said this is a Tutorial but it is a question, please change the topic.

to asnwer your question, Just set up 2 printers one for your offical recipt print and one for your ticket printer. Then just call the action to print on each one whenever you need.

Ive updated to a question for you

So, we tried to test the receipt printer and SambaPOS with the printer and it doesn’t work. The printer (COM) has no driver, is not visible in windows settings and can not be seen in Samba.

It’s about this printer http://winpos.com.tw/admin/product/front/products.php?upid=9#a

They say it’s an ESC/POS printer and should work, it works on all POS systems in Taiwan as it’s an official registered printer. But Not on SambaPOS V5 yet. Any suggestions how to set this up and adding a button or automate to print when settling ticket/bill.

In addition we have a thermal ticket printer that works when set to ‘windows printer’.
http://winpos.com.tw/admin/product/front/products.php?upid=4 WP-T810 Thermal Printer

COM/Serial is not like usb, you need to configure it.
You will find that your serial port will always display in device manager regardless of if a device is connected or not.
Usually you will in windows, add a new printer, select local, select the com option and choose the corresponding port.
You will need drivers or if dont have can try using the generic/text driver from windows.
You can usually hold the feed button while turning on the printer to get the braud rate etc settings required.
These will also need to be configured in the printer port settings.

Thanks, I have no idea how far the knowledge of the guys that came to set up the POS goes about connecting the printer, I thought they knew, obviously not.

Once the printer is recognized/set up, how to continue in Samba?

These printers are used at thousands of systems all over Taiwan, so it should be workable with Samba.

I’ll get the POS back on Thursday as I found dead pixels on the screen and had it taken back. Meanwhile they said they tried to configure the printer in Samba at their office but failed due to not knowing the software probably.

Wafflestop and belgianpie are the same if you would wonder, one is my home computer the other at the business.

These printers are used at thousands of systems all over Taiwan, so it should be workable with Samba.

Before you take their word and blame Samba tell them to get it configured within windows.
Samba can print to virtually anything so long as it is configured in windows.

That’s what I told them, I guess they are used to their own POS version or were just the guys that install install the system and connect the peripherals.

You should be able to set up every printer basically if you know how to do it, it used to be that way until they invented plug-and-play.

I don’t care, I buy a POS system with peripherals and use software of my choosing, which happens to be Samba. I hope I get some support for V5.

You can usually hold the feed button while turning on the printer to get the braud rate etc settings required.These will also need to be configured in the printer port settings.

@belgianpie, have you tried the above?

Do you know which COM port it is attached to?

You should be able to test printing in Windows via Command line:

Then in SambaPOS, configure the Printer as a Port Printer and specify the correct COM port… 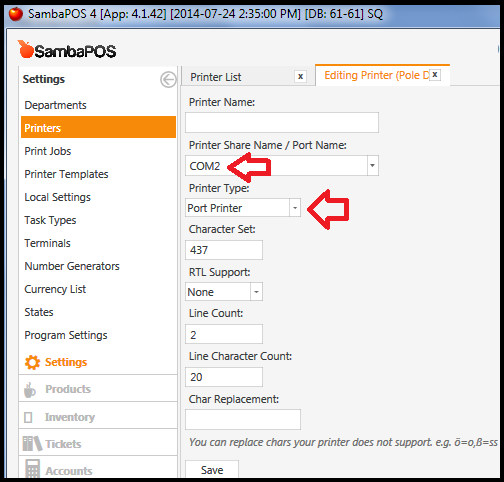 If you manage to get that all working in some regard, then you will need to find a manual for the printer that documents the ESC/POS commands so you can add them to your Printer Template using <XCT> codes.

No, because they had to take the POS back, dead pixels on the display and I don’t want that on a new system. Thursday they’ll be back.

I don’t care, I buy a POS system with peripherals and use software of my choosing, which happens to be Samba. I hope I get some support for V5.

Just to clarify, please don’t take it out on forum members that the hardware provider is not giving you the results you expect/want. We are just users like yourself who offer others support with their samba system…

I hope I get some support for V5.

If you put forward logical question you will get help, advice and support on this forum but so far you haven’t told us a huge amount other than you can’t get the printer to work…
Look down the topic, you have had 5 people try to offer assistance

I’m not taking it out on the forum, I just hope I can get some assistance. I expect from a company that sells POS systems that they know what they are doing, regardless of the software used.

I know that I need to do a lot myself regarding the customizing of the software setup, I want to be able to fix things myself and not wait for a service guy to show up at his convenience, but the hardware setup is not my problem when I buy the whole system.

But one thing I need to say, the moment you sell something, it’s expected giving some support for the product. Not everyone is a programming geek. It can look all logical and easy in a developers way of looking at the product, but the end user needs to be considered. Not just a few of them that know what they are doing. Basically ‘people’ are stupid … that’s the viewpoint you need to start from. i’m a pretty clever guy in a way, but even I am stupid when it comes to some things, I can impossibly know everything.

No one expects anyone to know everything and this forum is one of the best I have ever been involved with.

I expect from a company that sells POS systems that they know what they are doing, regardless of the software used.

In fairness that is not quite right, if you bought a PC from dell and installed Linux would you phone dell and complain that Linux wasn’t detecting a piece of hardware?
I have a Mac, if I dual boot with windows - which I do to run Samba - if there are issues in windows Mac are not going to offer support as its not their software.
The hardware side YES, the deal pixel etc is obviously their problem but to an extent you can’t expect them to know how Samba works if they usually provide a different software of their own…

The best tip I can give you though is to always provide as much information in your questions as you can.
Your original post;

Lacked some basic key information for anyone to be able to help you.

Going forward you first port of call is to ensure windows can see and use the printer.
It seems to be fundamentally a fairly standard setup in being Seial and ESC/POS so there should not be any problems.
You will need to connect via serial port on the computer. If not numbered you will need to test to see which port it actually is.
The spec says serial are you using a straight serial cable into the computer com port? not a serial/com to usb adapter (these are notoriously problematic)
Ideally you want to use the manufacturer drivers but if you can’t get any try using Generic/Text Printer driver within windows defaults.
Print a test page from within windows first either when setting up the printer or alternativly say from text editor or similar.
Once you have windows printing to it the samba side will be fairly straight forward.

They had a straight serial/com connector, now they want to change to the serial-to-USB connector … go figure. They don’t know how to install it, simple.

We are talking Windows computer and Windows software, and a printer that is used on as I said thousands of PC/POS sytems.

Anyways, thanks for the info, I’ll see on Thursday what they came up with, if anything at all.

We are talking Windows computer and Windows software

Please don’t get defensive, I was nearly trying to explain…
That was an example, its not a windows computer, its a computer that runs windows.
Like i said a Dell PC is a Dell PC not a Windows PC, windows would not offer support for dell hardware.
In the same way Samba is software which runs on windows, it IS NOT windows software, windows would not offer support for samba would they?
I don’t want to argue on the case was mearly trying to offer some perspective.

I sell POS systems with Samba software and obviously the machines run windows.
If they bought on and uninstalled samba and used another software and couldn’t get the printer to work would I be responsible to configure the other software?

Saying that in your case it comes down to wether they have sold the machine with samba or you have opted to install it yourself which would be more like the example of if you struggled to install Linux on a Dell computer, your issues with Linux is not Dells problem.

They don’t sell POS software pre-installed, they sell POS systems, with now Win 8 embedded. They probably have a source for POS buyers to go to and get the POS software installed and serviced. But as I said, I don’t want to talk to someone trying to explain what I want on my POS and how I want it. Because in the end I’ll pay a lot of money and have to finetune and adapt it myself.

And it’s a PC that runs windows and it’s a straight forward printer, Windows and Samba should be able to get some print out.

When you get the system back, insist on receiving the manual for the Printer, and try what I suggested in my previous post …

You should be able to test printing in Windows via Command line: