So I am migrating my samba DB from one machine to another. I have the Database Backups Module from the market. I have made a backup on the original machine, and now I am trying to restore it on the new machine. However, an error occurs during the process. 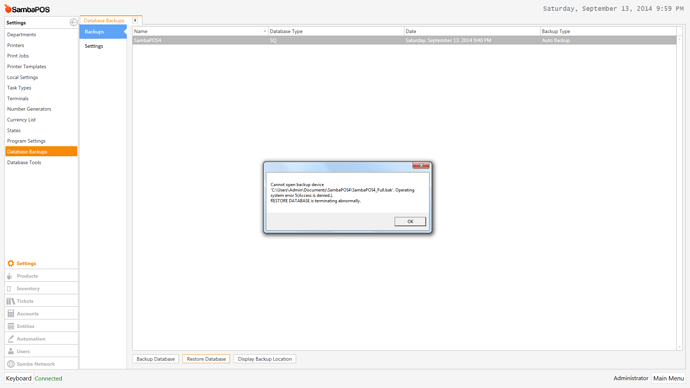 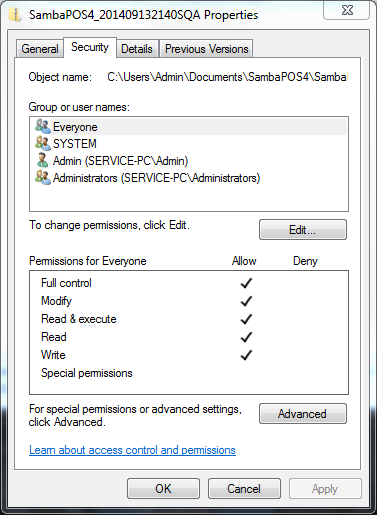 Move the backup file from a user account folder to just a generic folder. And then try it. Maybe move it to something like c:\sambabackups\

When you deal with user folders they have inherent permissions that can get tricky if your trying to access it from a program.

Do not set it to backup into a user folder. Create a specific folder for this. Preferably read the PS below.

PS: Kind of off topic but related - You really should avoid messing with permissions in User folders… you can cause all sorts of havoc. I recommend saving backups to an external drive like a Jump drive or external hard drive you can attach and detach. You can encrypt the entire drive for data integrity and security when you are live if that’s important to you.

Thanks Kendash, that seems to have resolved the issue. I moved the file to c:.
Unfortunately there is a different error now.

I’m guessing this feature is not meant to be used the way I’m using it.
So I tried the “Database tools” module, but that does not export/import products and tickets.

So I’m not sure how I can, from within Samba, create an entire backup of the DB and load it onto another machine.

Oh, of course. I’m sorry, I somehow did not see that.

Unfortunately, I have hit another snag

looking for a solution to a similar problem as @kimbokasteniv
I’ve tried restoring within management studio with overwrite with no success. also, tried restoring within samba with added backup tool with similar error message and failed. what could be causing the problem? I will try creating a new database in management studio as the OP has done, restoring, and then renaming manually.

I tried the below method.

Looked great as far as getting the ‘successful restore’ message within samba database backup module. But when I checked the products and entities that I had changed and backed up, none were restored to the back up. now I’m a bit panicked because I think there may be no way to restore to the previous database.

if its restoring it with success then the backup your restoring probably does not contain the data you thought you backed up. Are you certain thats the file?

yes i am certain. i backed up with database backup module just before data connection string change to sql server. just to be certain ive restored to another backup file I had created few days ago which had some changes made to the default Samba POS. that did not restore the backed up changes i had made to that point.
Unless there are different types of backup that i specify before i create a backup file, i believe i properly backed up. 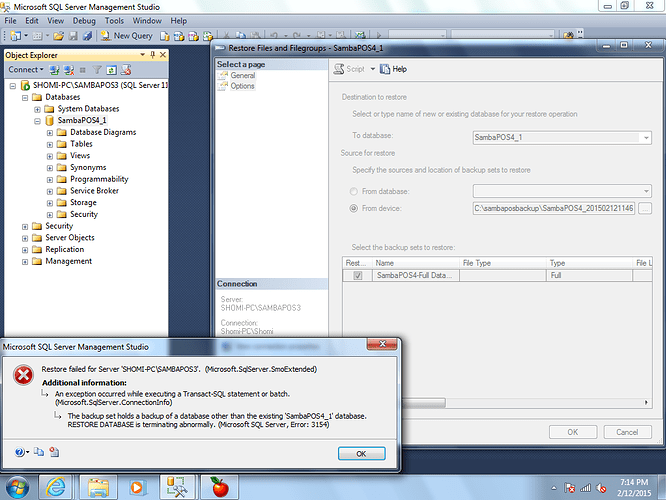 oddly, i can run sambaPOS backup module and get ‘successful restore’ message restoring to the same .bak file, but with no data actually restored.
suggest trying anything else (short of rebuilding the product, the entity, the user, and everything else)
I’ve lost all data for good if i cant recover the .bak file.

delete all the databases with mssms then right click on databases and restore it that way. Do not create a new one first. Just restore.

when you say all databases, do I include ‘system databases’ also? or do i leave that be?
just attempted the suggested:
1.with mssms, deleted ‘SambaPOS4’ database
2. right clicked on ‘Databases’ and restored database
3. selected overwrite option and chose the .bak file i need to restore to
4. encountered error 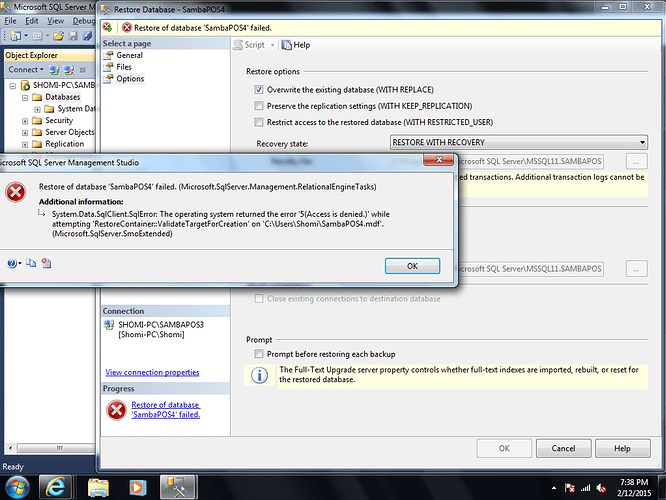 no leave that. Just the ones under that the samba databases. If it succeeds in restore after this but you still do not have your data then that means you did not backup your data like you thought you did. I can not explain what might have happened but sql backup is pretty straight forward it would not miss parts of a database.

Maybe start MSSMS as admin. It does not have permission to your users dir. Looks like your main file was stored there on your other instance. This one does not have access to write there.

try this. Load sambapos. set your connection string the same except tell it Database=sambatest

let me try it as admin; although, user ‘shomi’ is set as the admin.
i’ll log in with SQL server authentication

Try what i said in previous post… honestly though i have feeling you never backed up lke you thought you did. If the backup file said success in sambapos then that means it loaded and if it did not have the config you thought you had… then that backup file simply does not contain it. Means you backed up to a different file or somehow you were mistaken with the point you backed up.

although, user ‘shomi’ is set as the admin.

Windows starting with windows 7 does not give you true admin even if you set it as admin. YOu must right click the program and run as admin. It may not make a difference in this case though. Windows locks users dir down pretty tight. But definitely try what i said here:

try this. Load sambapos. set your connection string the same except tell it Database=sambatest

ok ran as admin with the same unsuccessful result. i’m going to try resetting the connection string as you suggest. thanks for all the prompt help. i’m amazed at how fast i’m getting these responses.

getting an error msg upon opening sambaPOS. erase settings and proceed? 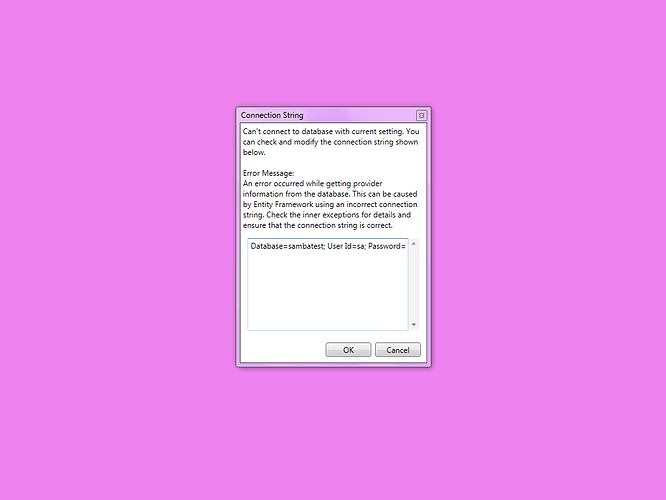