hoe can achieve this 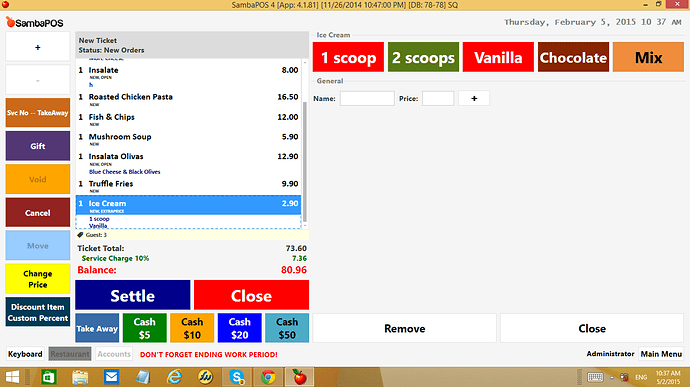 how do i set that 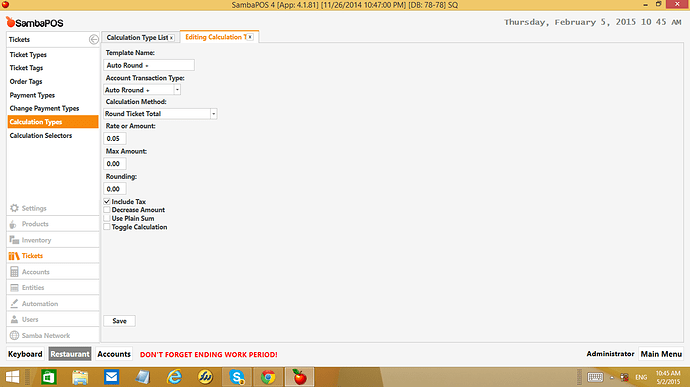 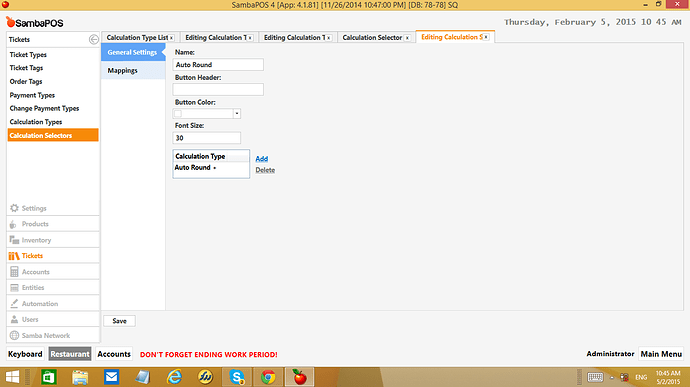 i set the calculation type to round ticket total exactly 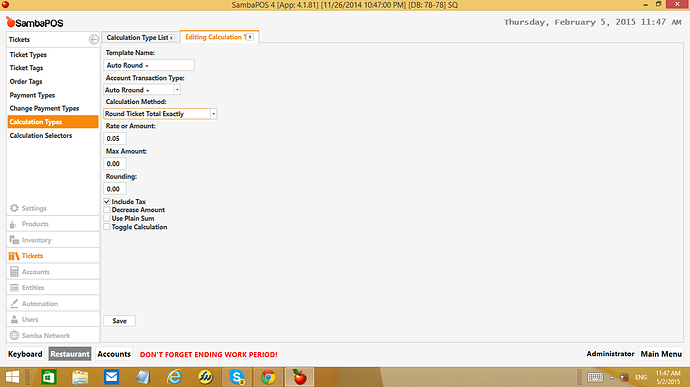 how to resolve this!!!

Is it because you have rate or amount field set to 0.05?

I dont know as i dont use rounding, just seemed a coincidence that you were getting 0.05 which is the value you have set there???

If you want it to round down you have to create a transaction type to decrease Amount. Or it will always round up.

Round Up Transaction Type: 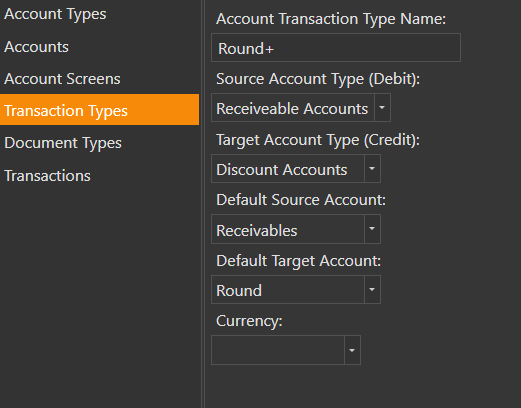 Round Down Transaction Type: 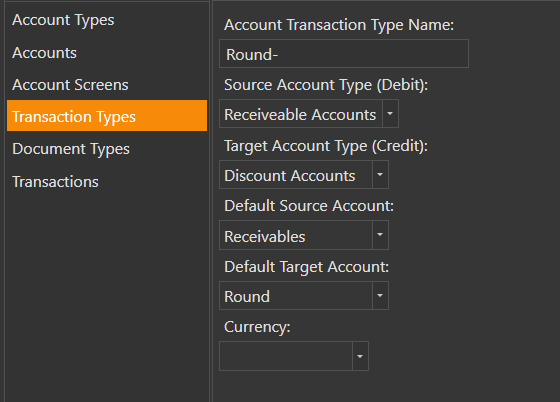 Round Up Calculation Type: 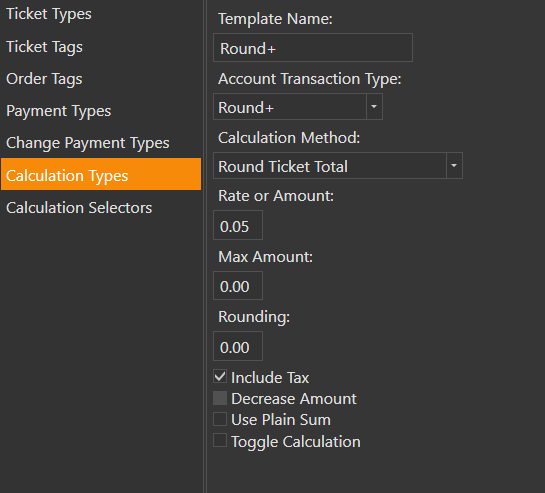 Round Down Calculation Type: 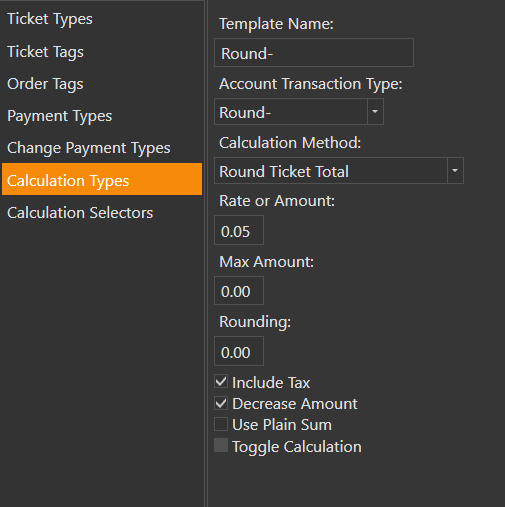 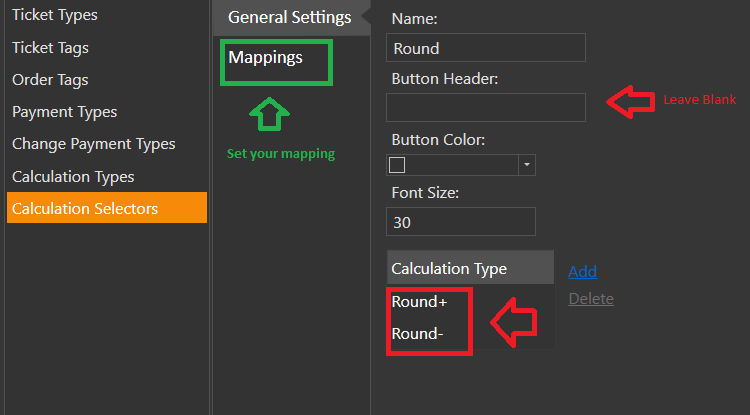 This will automatically round the ticket no button required.

f you want it to round down you have to create a transaction type to decrease Amount. Or it will always round up.

i want it to always round up

and it is rounding up my concern is
why rounding 0.05 or 0 up also?

can you show an example?

can you show an example? 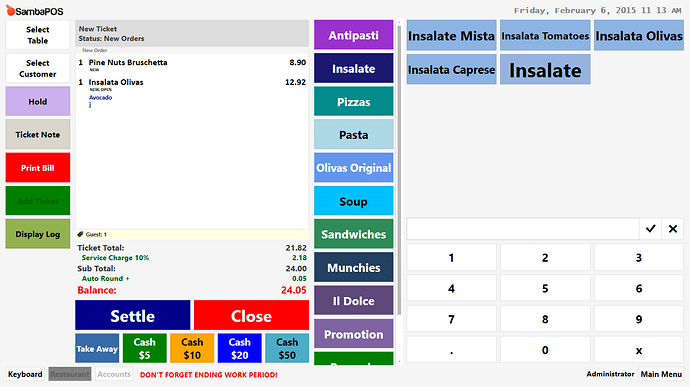 You told it to Round Exactly by .05 so its going to round EVERYTHING by .05 this includes 0

you see in other article by @JohnS they have this disccussion

Actually its not. If you set it to Round Exactly it does not skip. Maybe @emre should look at the rounding from 0 though.

any rule, or other calculation type

PS you got another feature that SambaPOS need improve

You could instead of using a calculation type use the action and set it in a rule that has a constraint on 0. BTW I have not tested that.

What do you mean if he can add a constraint in the rule? You can write your own constraints that is how it is designed.

as you said i will have to use use the action and set it in a rule that has a constraint on 0.

it is something everybody wants to be correct

Maybe we are confusing some terminology. I am referring to Rules in Automation > Rules. Are you referring to something else?

If you mean can he fix the Calculation so it wont Round 0 then that depends on if it was expected behavior or not. Because you told it to round Exact.

I would assume it shouldnt round 0 as well. But it could have another purpose we have not discovered.

i was referring to programming at backend

i was referring to programming at backend

That is not called Rules btw. You completely confused me because Rules in SambaPOS means Automation > Rules

And Constraint is specific terminology for those Rules. So I naturally thought you were talking about Rule Constraints and although I had a hunch what you really meant it was confusing and I had to make sure

BTW: I am looking at other options testing a few things.

Depends many times it takes A LOT of his time away from other projects that more people can use.